The following is reposted from the website of the Cuba and Venezuela Solidarity Committee. 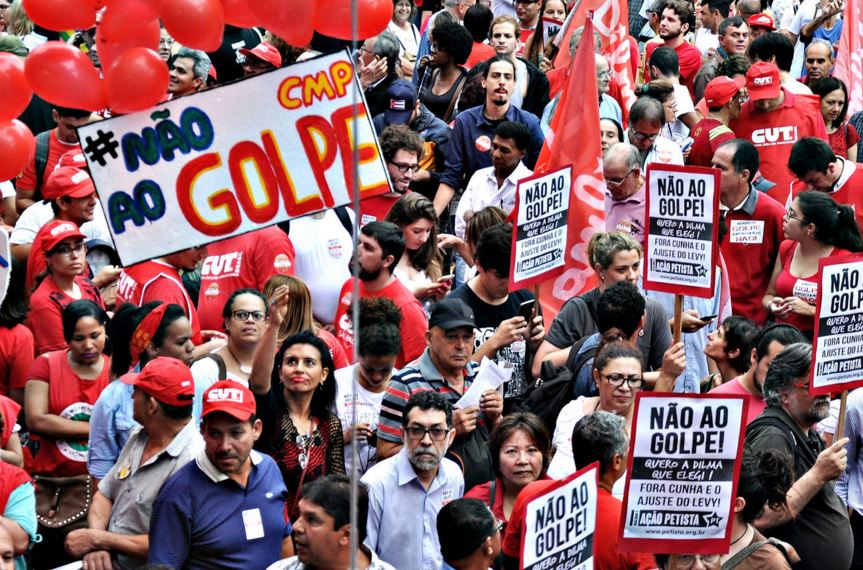 Sectors of the right wing representing the oligarchy, in alliance with the reactionary press in Brazil, openly supported by the corporate media and imperialism, have consummated in the country’s House of Deputies the first step in what constitutes a parliamentary coup d’etat against the legitimate government of the Workers’ Party (PT) and President Dilma Rousseff, which has been in the works for several months.

This is an attack, based on unproven accusations with no legal foundation, on Brazilian democracy and the legitimacy of a government which was elected at the polls by a majority of the people, as has been denounced by the head of state and by former President and PT leader, Luiz Inacio “Lula” Da Silva, and by numerous leaders of left wing political parties and Brazilian social movements.

Since 2003, the year in which the first Workers Party government led by Lula took office, important social programs have been implemented in Brazil, which have had a significant impact within the less privileged population. According to the World Bank, 25 million Brazilians escaped poverty, thanks to programs such as “Bolsa Familia”; “Mi Casa, Mi Vida”; “Más Médicos” and “Hambre Cero”.

Brazil became an influential international actor, a defender of just causes, and a promoter of unity and Latin American and Caribbean integration.

The coup plotting opposition is looking to end the cycle of popular governments of the Workers Party, and thus roll back the social gains won by the Brazilian people, to install a neoliberal government which will allow large transnational companies to plunder the natural resources of this sister Latin American country – especially its immense oil, mineral, water, and biodiversity – and one which will subordinate its foreign policy to hegemonic imperialist interests.

The coup against Brazilian democracy is part of the oligarchy and imperialism’s reactionary counteroffensive against Latin American integration and progressive process in the region. It is, at the same time, directed toward the group of countries known as BRICS, a bloc of powerful economies which have challenged the hegemony of the U.S. dollar.

The Ministry of Foreign Relations of the Republic of Cuba energetically condemns the parliamentary coup underway in Brazil, and resolutely supports the people and the legitimate government of this sister country, as well as President Dilma Rousseff, in defense of the political and economic gains and social accomplishments achieved during the Workers Party governments.