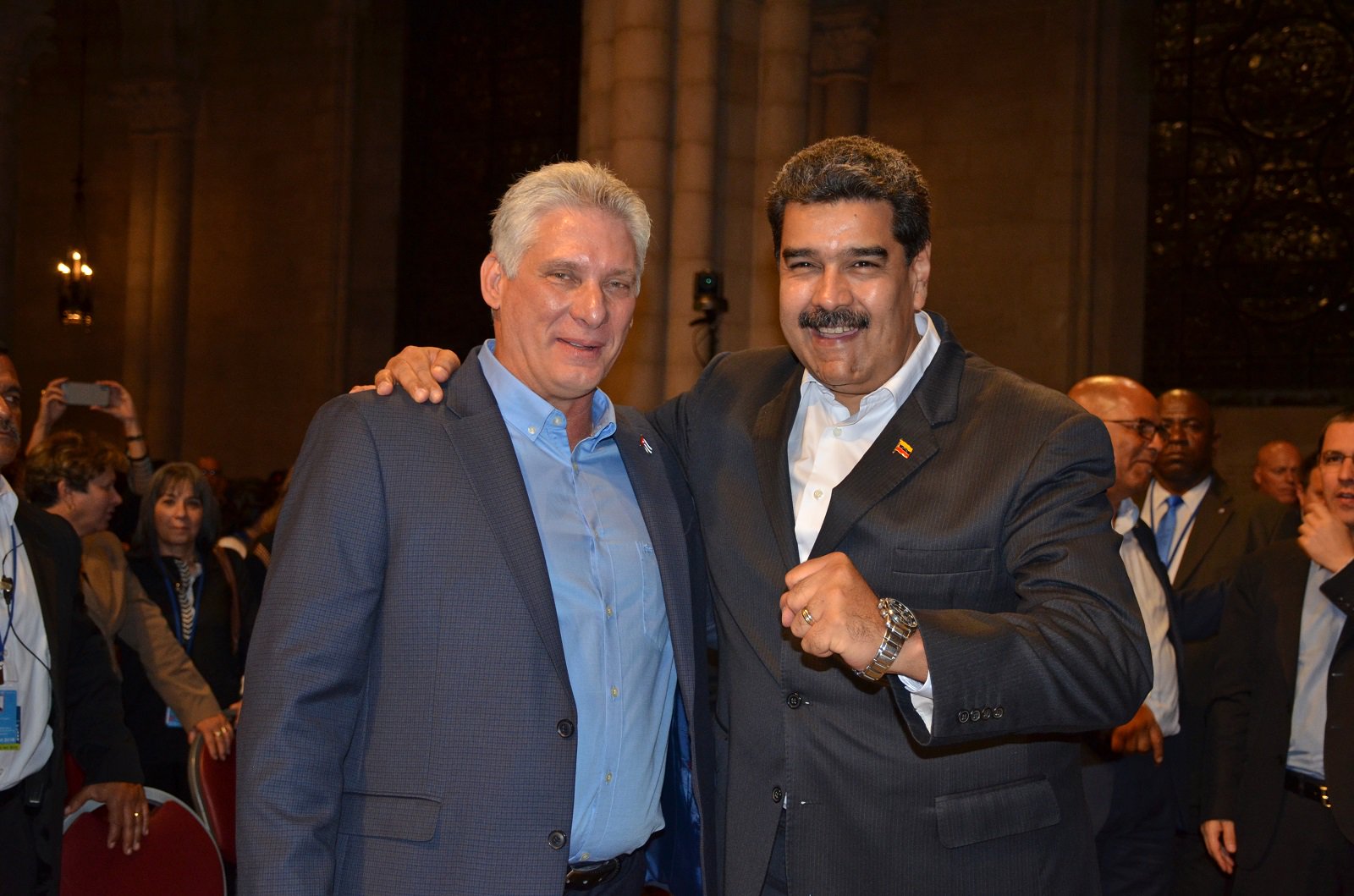 The following article by Joyce Chediac was originally published on Liberation News on Sept. 30, 2018.

More than 2,100 people packed and overflowed New York City’s historic Riverside Church on Sept. 26 to warmly greet Miguel Díaz-Canel Bermúdez in his first visit to the U.S. as President of the Republic of Cuba. Díaz-Canel was in New York to address the opening of the 73rd session of the United Nations General Assembly.

The name of the meeting, “Cuba Speaks for Itself, ” was especially apt. The establishment media’s steady invective against Cuba rarely allows that country’s leaders to counter with their viewpoint. Tonight Cuba did speak for itself tonight and its message was solidarity.

Díaz-Canel highlighted the solidarity that the African-American community in the U.S. has given to Cuba. He expressed appreciation for the solidarity progressives in the U.S. and around the world have shown for Cuba as it struggles against decades of a U.S. blockade.

The Cuban president then described the country’s foreign policy as based in solidarity and “a commitment to those who have suffered and continue still to suffer injustice and exclusion….It is a foreign policy which makes health calls for the have-nots, the marginalized and the exploited.”

The crowd, which had waited on long lines for hours, and endured extensive security checks to enter the church, rose to its feet with joyous cheers when a surprise guest took the podium–Nicolás Maduro Moros, President of the Bolivarian Republic of Venezuela.

Maduro brought “greetings from the heart of the noble revolutionary Venezuelan people.” He said, “I came to New York, to the United Nations, to bring the truth about the Venezuelan people. I also wanted to return to this historic church in Harlem and reiterate our love and commitment, and share this moment with our brother Miguel Díaz-Canel and the people of Cuba.”

“We have been victims of immense imperialist aggression, but today I can say that the Bolivarian Revolution of Venezuela is still standing, alive and victorious,” Maduro concluded, to huge applause. Maduro was also in New York for the UN General Assembly session opening.

President Miguel Díaz-Canel began his speech referring to the presidents’ UN talks. “Today at the United Nations, two sister peoples raised their voices. Venezuela denounced all the aggression to which it has been subjected and also ratified its decision to continue the Bolivarian revolution, as a legacy faithful to Comandante Chávez,” he noted.

“For Maduro, for Venezuela, for the Cuban delegation, it is very emotive to be here with you, friends of Cuba and Venezuela here in New York. Miracles like these happen in this city only here, in the Riverside Church,” the Cuban President stated, stressing that this meeting, in a cathedral of faith and solidarity, was a gathering of brothers and sisters, of friends, of equals.

“On our way here we drove through Harlem, the location of the legendary Hotel Theresa, which welcomed our first revolutionary delegation to the United Nations” he said. [In 1960, when Cuban Prime Minister Fidel Castro Ruz and the revolutionary Cuban delegation to the UN were harassed out of a fancy midtown hotel, they stayed at Harlem’s Hotel Theresa. Fidel was given a warm reception there and met with Malcolm X and other Black leaders. Fidel was to note, “I am going to Harlem, because that’s where my best friends are.”—ed.]

Díaz-Canel recalled that here at Riverside Church in 2000 Fidel announced before 3,000 people a program to train people from the U.S. to become doctors free of charge at Cuba’s Latin American School of Medicine, if they worked in under-served areas upon their graduation. A delegation of these graduates was present, and Díaz-Canel said he would take a picture together with them at the end of the program.

“This church, he said, “reminds us of the profound friendship between Fidel and Rev. Lucius Walker,” who repeatedly defied the U.S. blockade of Cuba to bring needed supplies there. The Cuban president called Walker “an emissary of solidarity during the darkest years of the deep economic crisis caused by the tightening of the blockage against our country after the collapse of the socialism in Europe. That’s why tonight we are going to speak about solidarity…

“You have embraced Fidel and Cuba on behalf of the best of the American people. The first thing I want to say is thank you.” 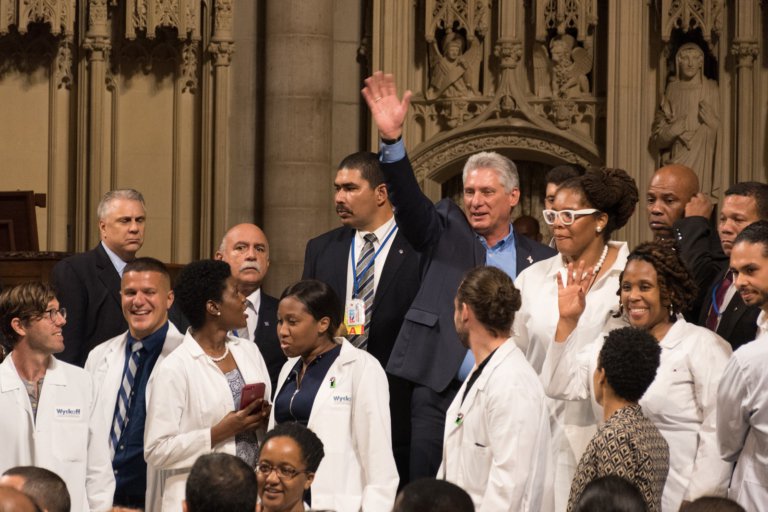 “Cuba is not a large or powerful country. It’s not rich in natural resources. But these limitations have not stopped us from practicing solidarity on the basis of sharing what we have—not giving away our leftovers—but actually sharing what we have. It’s a sacrifice in solidarity which is practiced with humility and which has had an impact for several decades on the lives of millions of people in several continents,” said Díaz-Canel.

He said that tens of thousands of Cuban professionals, particularly medical staff, are now giving service in over 75 different countries. “They represent more than the 1 million Cuban professionals who have served in Africa Asia, Latin America and the Caribbean since the triumph of the revolution….

“The greatest endeavor of international solidarity of the Cuban revolution was its support of the African liberation movements.” Here, Cuban troops protected “the sovereignty and integrity of Angola, defended Namibia, struck a blow to the war machine of the apartheid regime in South Africa.

“This is why, when Cuba comes to the United Nations General Assembly and promotes cooperation and solidarity, as opposed to threats, competition, racism and selfishness, Cuba does so with the authority of the people who have shown that it is possible to achieve those goals in a country that has turned words into concrete actions,” Díaz-Canel said.

“The foreign policy of the Cuban Revolution maintains its consistent position of international solidarity. This is a commitment to those who have suffered and continue still to suffer injustice and exclusion; to those who have suffered and still continue to suffer as a result of colonialism, neoliberalism, imperialism and racism. It is a foreign policy which makes health calls for the have-nots, the marginalized and the exploited…

“Cuba also owes a lot to international solidarity and to the help of many friends and activists here in the United States, among whom are many Cuban residents,” he continued. He referred to the struggle to free the Cuban Five, and to return the Cuban child, Elián González, to Cuba.

He stressed that bilateral relations with the United States continue to be characterized by the economic blockade, which constitutes an obstacle to the development of the Cuban people and has caused huge deprivation to Cuban families.

Díaz-Canel also talked about current democratic practices within Cuba. “The task at hand for the Cuban nation,” he said, “is the mass popular discussions of the Cuban constitution” currently going on. The new constitution draft is being discussed by all Cubans, including those living abroad, between August 13 and November 15. After input and revisions, it will be adopted by a national referendum, replacing the 1976 constitution.

He expressed “fraternal recognition of the extraordinary network of the tireless friends who have fought against the economic blockade for all these years as well as demanding a respectful policy towards Cuba.” To those present, he said, “I come here to ratify the solidarity and the unwavering commitment of the Cuban people to the cause of justice and the rights of peoples to dream about and achieve a better world, which is indeed possible.”

The Cuban president ended his talk by remembering those revolutionaries who came before, like Fidel Castro and Hugo Chávez. The crowd rose in in a standing ovation to his final words, “Today we say to you Fidel and Chávez presente! Viva the Bolivarian revolution of Venezuela! Viva the Cuban revolution! Long live—solidarity! Hasta la Victoria siempre! 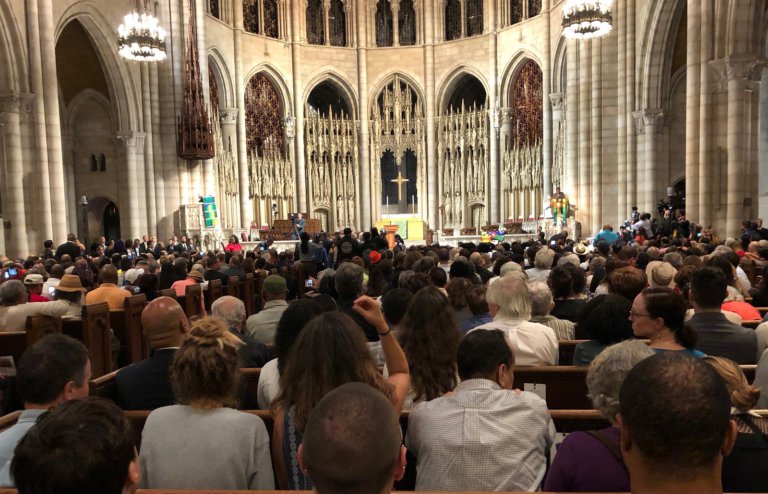 Organizers of the activity

The Riverside Church event was organized by a coalition of New York and New Jersey solidarity organizations, including the Interreligious Foundation for Community Organization/Pastors for Peace, the Venceremos Brigade and the July 26th Coalition. IFCO director Gail Walker and Puerto Rican activist Frank Velgara co-emceed the event. Adding to the evening’s rich cultural experience was the Healing Drum Collective and a Riverside church choir group. Among the U.S. Cuban solidarity activists recognized from the podium, recipients of Cuba’s Friendship Medal granted by the Council of State, were Gail Walker of IFCO, Leslie Cagan, Gloria La Riva, and Rosemari Mealy. Among those also recognized were the Venceremos Brigade, former U.S. Congressman Charles Rangel and attorney Michael Krinsky.

The next day, a reception was held by progressive groups for Venezuela’s delegation to the United Nations. Foreign Minister Jorge Arreaza gave a dynamic speech to an enthusiastic crowd at the People’s Forum in downtown Manhattan. He outlined the damaging effects of the U.S. economic sanctions in all aspects of the economy. In just one example of many, the U.S. imposes fines on banks that accept transactions from Venezuela. “This year we had to begin our vaccination program in January, to pay the Pan American Health Organization [PAHO], we sent the money, $8 million.

“Five days later, the bank said the transaction was not allowed, and the vaccines remained in the United States. We sent the money through another bank. Five days after, the money was denied. We asked PAHO for help with this problem. We should have started vaccinations in January and finally began in April, only after PAHO intervened on our behalf. Finally, the U.S. treasury gave one-time permission, with many restrictions, until we finally could receive the vaccines.”

To cheers and applause, Arreaza assured the audience that Venezuela will defend its sovereignty no matter the challenges or military threats.

President Díaz-Canel had a full itinerary while in New York City. Besides speaking before the UN General Assembly on behalf of Cuba, he rendered homage to the South African revolutionary Nelson Mandela at the UN Nelson Mandela Summit for Peace. He met with various heads of state at the UN, visited Ground Zero to honor the victims of the 9/11 attack. He also had a special meeting with Cubans residing in the United States, and meetings with religious leaders, with industry and agricultural executives and a special encounter with cultural artists of New York City.