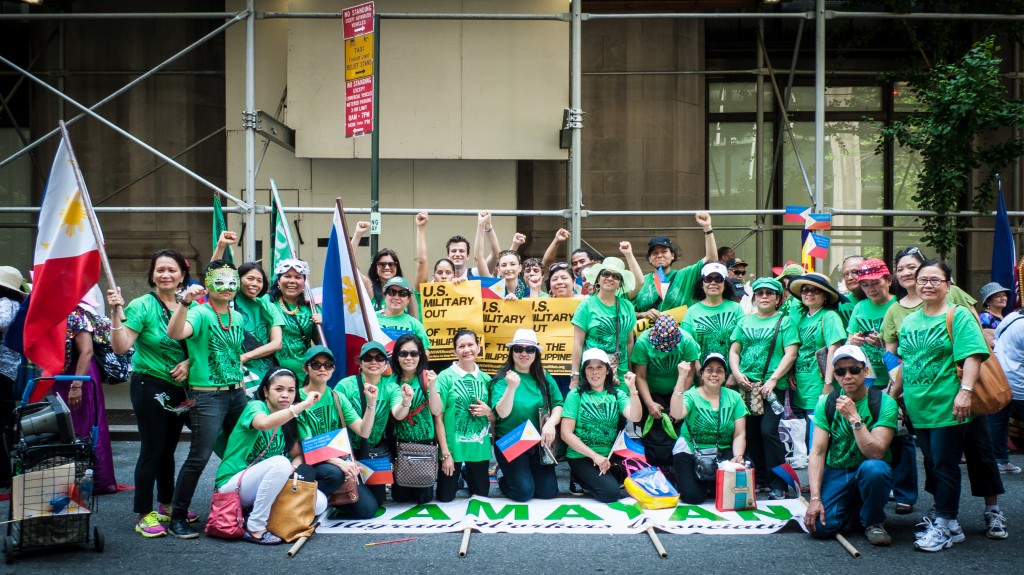 This statement was issued by Damayan Migrant Workers Association

Damayan stands with our Filipina sister and fellow domestic worker Eudocia Pulido, and condemns the abuse she suffered for 56 years at the hands of her employers, Francisco and Leticia Asuncion Tizon, Alex Tizon’s parents. Founded and led by Filipino domestic workers, Damayan has been organizing Filipino low-wage workers for 15 years in order to combat labor trafficking, promote human and workers’ rights, and develop trafficking survivors into social justice leaders.

Labor trafficking is a crime, the most severe form of worker exploitation. Eudocia Pulido was brought to the U.S. as a domestic worker for Francisco Tizon, a consular officer, and his family. She was at first reluctant to leave the Philippines, but was manipulated by false promises that she would be given an “allowance” to support her parents and relatives back home. For 56 years, she worked, was treated like a slave, and was never paid. She was a survivor of labor trafficking who never received justice for the abuses inflicted on her by the Tizon parents.

Labor trafficking is a crime punishable by law, just like murder. The Tizon parents violated anti-trafficking laws and committed a crime in their home. Aware of the consequences of their actions, they carefully hid their crime while keeping their trafficked domestic worker, Eudocia Pulido, in plain sight. Just like murder, labor trafficking cannot be waived by a heartfelt apology, by a cathartic journalistic exercise, or by taking the victim’s remains back to her relatives. Alex Tizon, in this story, was complicit in his parents’ abusive treatment of Eudocia Pulido.

In 2000, Congress passed the Trafficking Victims Protection Act (TVPA), which provides legal protection and recourse for victims of trafficking. The TVPA defines labor trafficking as “the recruitment, harboring, transportation, provision, or obtaining a person for labor or services, through the use of force, fraud, or coercion for the purpose of subjection to involuntary servitude, peonage, debt bondage, or slavery.”

The signs of trafficking are very clear in Eudocia Pulido’s situation:

1) Restriction or monitoring of movement. The Tizon parents prevented Eudocia from returning to the Philippines, even when her parents passed away. (“Both times she wanted desperately to go home. Both times my parents said ‘Sorry.’ No money, no time.”) The Tizon parents allowed Eudocia to become undocumented against her will, which further restricted her movements and made her unable to return to the Philippines.

2) Actual or threats of physical violence. The Tizon parents physically hit Eudocia. (“He punched her just below the shoulder. Lola ran out of the room and I could hear her wailing, an animal cry.”)

3) Actual or threats of emotional or psychological abuse. The Tizon parents emotionally and psychologically abused Eudocia for most of her life. (“Later she’d take Lola into a bedroom for a talk, and Lola would walk out with puffy eyes. Lola finally begged us to stop trying to help her.”) Eudocia endured living with the impacts of trauma for decades, and in order to survive, she had to become psychologically submissive, similar to the phenomenon of domestic violence survivors who feel the need to appease their abusers in order to live through the conditions of long-term abuse.

4) Instilling fear through other coercive methods. The Tizon parents used the Filipino value of “utang na loob” (debt of gratitude) to silence Eudocia and keep her in an abusive situation for decades. This cultural practice is a tactic of control and exploitation that has been used against many of the trafficking survivors with whom Damayan has worked.

5) Fraud involving pay, type or conditions of work, etc. The Tizon parents led Eudocia to believe that she would be paid when she moved with them and their family to the U.S., but they never paid her throughout her decades of service to their family. (“Mom let out a sigh. ‘How could you even ask?,’ Dad responded in Tagalog. ‘You see how hard up we are. Don’t you have any shame?’” Alex Tizon’s brother summed it up succinctly: Eudocia “wasn’t paid. Toiled every day. Was tongue-lashed for sitting too long or falling asleep too early. Was struck for talking back. Wore hand-me-downs. Ate scraps and leftovers by herself in the kitchen. Rarely left the house. Had no friends or hobbies outside the family. Had no private quarters. (Her designated place to sleep in each house we lived in was always whatever was left—a couch or storage area or corner in my sisters’ bedroom. She often slept among piles of laundry.)”)

Nothing absolves employers like the Tizon parents of their responsibility: not their son Alex Tizon’s feelings of guilt, nor his expressions of fondness and complacency. They repeatedly compelled Eudocia Pulido’s servitude by instilling a sustained, inescapable climate of fear. She was never able to break out of the cycle of abuse, because she was kept isolated from friends and organizations that could have helped her to escape.

The Tizon parents are not the only ones accountable for the slavery of Eudocia Pulido. As revealed in the article, young Eudocia Pulido was desperately trying to survive post-World War II Philippines, seeking food and shelter, and so she agreed to work for the author’s grandfather without pay, which paved the way for her to then be trafficked to the U.S. by the author’s parents. This narrative, of escaping poverty and unemployment in the Philippines, is echoed in the sad, horrible stories we see and hear at Damayan as part of our organizing work.

The Philippine government lacks the political will to build its local economy, and its failure to provide jobs and adequate livelihood for its citizens is a major cause of labor trafficking. More than 6,000 Filipinos leave the country every day through the government’s Labor Export Program, which systematically promotes the out migration of its workforce to over 200 countries globally. 70% are women and 80% of these women become migrant domestic workers in receiving countries like the U.S. The Philippine government should also be seen as accountable for the enslavement of Eudocia Pulido and all present-day trafficked Filipino domestic workers in the U.S.

The present-day fight against labor trafficking

There are many more Eudocias in the U.S. who are still suffering silently at the hands of their trafficker abusers, and their stories are hardly ever known. Damayan (“helping each other” in Filipino) has worked with survivors who were trafficked by diplomats, ambassadors, and consular officers (like Francisco Tizon), as well as by wealthy businesspeople, schools, churches, and placement agencies from all around the world. Most Filipino labor trafficking survivors come to the U.S. through different visa programs, and domestic workers for diplomats come through the A3 and G5 visas. Filipinos are one of the most common sources of domestic workers in the homes of diplomats from countries such as Germany, Peru, Japan, Tunisia, Morocco, Saudi Arabia, Dubai, Turkey, and the Philippines. There is no data on the numbers of Filipino migrant workers who are trafficked, because no comprehensive study has been conducted to date. The Philippine embassy and the various consulates in the U.S. keep a record of Filipino domestic workers who enter the country through the A3 and G5 visas, but they refuse to share this information with Damayan.

Damayan works on behalf of trafficked domestic workers, helps them escape their abusive situations, gives them access to pro bono legal services and other resources, holds their employers accountable, and empowers them to tell their own stories. We have been doing anti-trafficking work in New York since 2007 through our flagship campaign, Baklas: Break Free from Labor Trafficking and Modern Day Slavery. (Baklas means “break free” or “dismantle” in Filipino.) Damayan has assisted 28 workers to win their visas and has reunited 17 survivors with their families, including 36 children. We currently serve over 1,800 members, including 174 workers with pending cases involving trafficking, fraud in labor contracting, and stolen wages. We have successfully developed survivors into social justice leaders who now serve as Damayan Board and Cooperative Board members, and in 2015, we received the prestigious Paul and Sheila Wellstone Award for our anti-trafficking work. Damayan is also one of the lead anchor organizations of Beyond Survival, the anti-trafficking campaign of the National Domestic Workers Alliance (NDWA).

If you are a victim or survivor of labor trafficking, contact Damayan, we can help you. If you know someone who has been trafficked, or if you want to do more to support survivors:

1) Educate yourself about labor trafficking. Click this link for The Empire Files video, “Buying a Slave.”

2) Amplify the voices of labor trafficking survivors so that their stories are heard. Attend events that spread awareness of the stories of survivors.

3) Volunteer for organizations that advocate for the rights of labor trafficking survivors.

4) Donate to organizations that support trafficking survivors, such as Damayan Migrant Workers Association.

Trafficking survivors, their families, and immigrants in general are under severe attack in the current anti-immigrant environment. Together with sister organizations, Damayan is standing strong and working hard to fight labor trafficking, modern day slavery, anti-immigrant scapegoating, and bigotry. To support Damayan’s work, donate here.

If you feel or think that you are a victim or survivor of labor trafficking, Damayan is here for you. Please contact Damayan at 212.564.6057 or [email protected] to speak with a casemanager or organizer.

This statement was issued by Damayan Migrant Workers Association