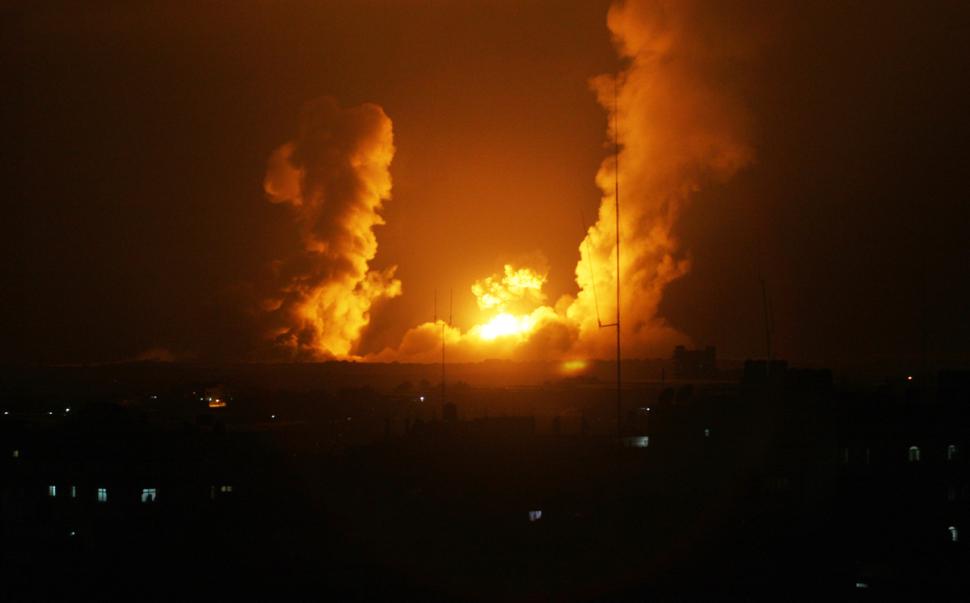 The ANSWER Coalition will maintain a listing of demonstrations in solidarity with Palestine on its homepage, and a national march on the White House will take place August 2. It is critical that progressive people in the United States continue to speak out against the latest campaign of Israeli aggression, and demand an end to all U.S. aid to Israel.

In the midst of heightened Israeli repression and bombing raids, the threat is growing of a new, wider war against the Palestinian people. What began with a wave of repression in the West Bank has escalated into a murderous bombing campaign primarily targeting Gaza. In just one airstrike, Israel murdered 18 members of the same family in Gaza, including 5 children.

Fascist Israeli politicians are ratcheting up their genocidal rhetoric, indicating that their military campaign is likely to continue for a protracted period of time. Referring to Palestinian youth as "little snakes," Ayelet Shaked, a high-ranking member of the Israeli legislature, called for the murder of all Palestinian mothers, "They are all enemy combatants ...  this also includes the mothers of the martyrs ... They should go, as should the physical homes in which they raised the snakes. Otherwise, more little snakes will be raised there."

On June 12, three Israeli settler youth disappeared near the city of Hebron, a case which has received nearly non-stop coverage in the U.S. mainstream media. On Monday, June 30 their bodies were found near the village of Halhoul in the southern occupied West Bank. The same day, a 17-year-old Palestinian was kidnapped, tortured and killed.

Israeli Prime Minister Binyamin Netanyahu seized on the kidnapping of the Israeli youth to press his agenda of smashing the April unity agreement between the Palestine Liberation Organization (PLO) and the Hamas party. At the same time, massive repression was unleashed on the Palestinian population in the West Bank, and an intensified bombing campaign targeting Gaza has caused major damage and suffering.

While presenting no evidence to support his claim, Netanyahu immediately blamed Hamas for the kidnapping, an allegation denied by the Hamas leadership.

His June 16 statement that “the international community must call on [Palestinian Authority] President Abbas to end his pact with Hamas” was the theme repeated endlessly in the ensuing three weeks.

Palestinian unity is viewed as a great danger by the Israeli leadership. Netanyahu’s government and leaders in the United States reacted with great hostility to the agreement when it was announced on April 23, 2014.

Netanyahu announced at that time that he was “canceling negotiations.” But the reality is that there have been no real negotiations for years because the Israeli aim is not actually a “two-state” solution of any kind, even one that would result in an extremely weak Palestinian entity. Instead, the Israeli goal is to drive the Palestinians out through repression, starvation, humiliation, lack of opportunities, etc.

Since the bodies of the three settler youth were found, evidence has emerged that the Israeli authorities knew of their fate almost immediately after their disappearance. The evidence was concealed for two reasons: 1) to justify the protracted “search” operation dubbed “Operation Brothers Keeper” targeting particularly Hamas supporters in the West Bank, and 2) to allow Netanyahu and other top Israeli officials to prolong their campaign of racist incitement against the Palestinians.

In the course of the massive Israeli military operation in the West Bank searching for them, at least nine Palestinians, several of them teenagers, were killed by the Israeli occupation forces, a fact that has somehow escaped the attention of the corporate media here.

At least 640 people have been detained – and doubtless suffered physical abuse – 11 of them elected members of the Palestine Legislative Council, the Palestinian parliament. More than 50 recently released prisoners have been re-imprisoned. Over 1,000 homes, universities and other facilities have been raided. In addition, Israel has carried out air strikes on at least 34 targets in Gaza, which remains blockaded and economically strangled by Israel.

Rebelling against the heightened repression, Palestinians have taken to the streets in many areas, confronting heavily armed occupation forces. On July 2, more than 170 Palestinians were wounded with plastic-coated steel ammunition – so-called “rubber bullets.”

There is now a very real threat of another large-scale Israeli invasion of Gaza, which has come under increasingly heavy bombardment in an attempt to weaken the resistance forces operating there. Additional Israeli ground forces are also being mobilized near the border as extreme right-wing politicians in Netanyahu's government call for a dramatic escalation of the assault.

Since the latest round of bombing began, over 80 Palestinians have been murdered by the Israeli military, many of whom were children. Despite their hypocritical rhetoric, the Israeli regime is the one carrying out acts of terrorism.

On July 1 in Idhna, a village near Hebron, the Israeli army responded with live ammunition and other weaponry to a protest against the demolition of a house that was home to 13 people, including eight children. Six young people were wounded by live fire ammunition and four more by so-called rubber bullets.

The murder of Palestinian youth and children has been a regular feature of the Israeli occupation, another reality that the mainstream media in the United States has studiously ignored.

Since 1967, more than 500,000 Palestinians from Gaza and the West Bank have been arrested and imprisoned by the Israelis. Today, there are more than 5,200 Palestinians in prisons inside the 1948 borders of Israel. Of those, about 190 are minors and 27 are under the age of 16. All of them are held in violation of international law, which prohibits an occupying power from transferring residents of the occupied territory into the territory of the occupier.

Put a different way: All of the Palestinians from the West Bank and Gaza held in Israel jails are kidnap victims.