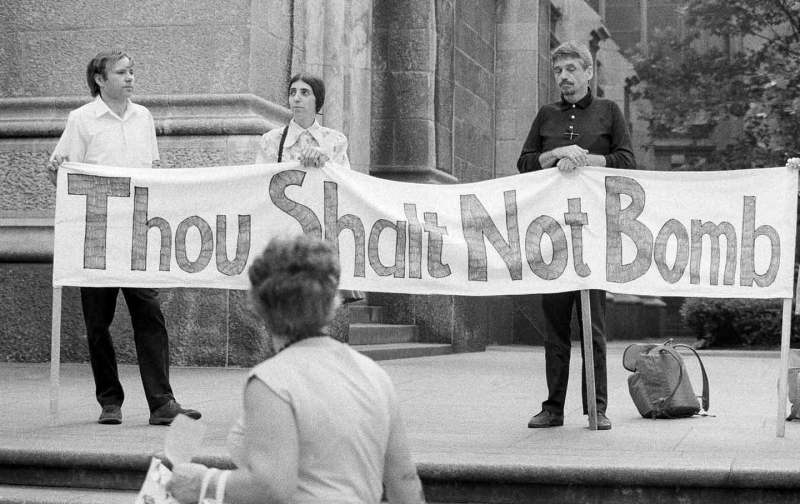 The peoples’ movement has lost a fearless and longtime champion for peace and a fighter of what he called, “American military imperialism.” Daniel Joseph Berrigan passed on April 30 in the Bronx, New York City at the age of 95.

Berrigan, born May 9, 1921 in Virginia, was the son of an Irish Catholic trade unionist. He would grow up to become a Jesuit priest, and while in the church he developed into a political radical and advocate for the poor.

Berrigan, along with his brother Phillip, became an avid opponent of the war in Vietnam, and founded the Catholic Peace Fellowship to organize anti-war demonstrations.

In January 1968, Berrigan, accompanied by historian Howard Zinn, traveled to Hanoi to facilitate the release by the North Vietnamese of three captured American airmen. The trip coincided with the Tet Offensive. Berrigan personally experienced the barbaric bombing campaign perpetrated by the U.S. against North Vietnam.

Upon his return, Berrigan signed the “Writers and Editors War Tax Protest” pledge to refuse paying taxes as long as the U.S. waged war in Vietnam.

On May 17, 1968, Berrigan and eight other Catholic opponents of the Vietnam War destroyed 378 draft cards outside the draft board in Catonsville, Maryland, symbolically using homemade napalm, which the U.S. used against children and other civilians in Vietnam. The action by what would become known as the “Catonsville Nine” landed Berrigan on the FBI’s most wanted list, and Berrigan was arrested and sentenced to three years. He was for a short time able to evade imprisonment though the protection of friends and allies, but was eventually caught by agents and was released by 1972.

On September 9 1980, Berrigan initiated what would become the Plowshares Movement when he and the seven other members of the “Plowshares Eight” broke into General Electric nuclear arms making building and caused damage to warheads and poured blood on weapon makers’ documents and file drawers. He and the others were arrested and spent 10 years in prison for their act of civil disobedience.

Following his release, Berrigan remained an outspoken critic and activist against U.S. imperialist intervention, opposing both invasions of Iraq, the bombing of Yugoslavia, and the invasion of Afghanistan. He was also a vocal supporter of the Occupy Wall Street movement.

Very few have exhibited the kind of fearlessness and commitment to fighting U.S. imperialist aggression that Daniel Berrigan had in his long life of struggle. His example will serve as an inspiration to all who struggle and seek justice for the suffering and destruction caused by the U.S. war machine. Our hearts go out to his family and friends who he has left behind. Long live the memory of Daniel Berrigan! Long live the struggle against imperialism and war!