This writer was at Standing Rock a few weeks ago. 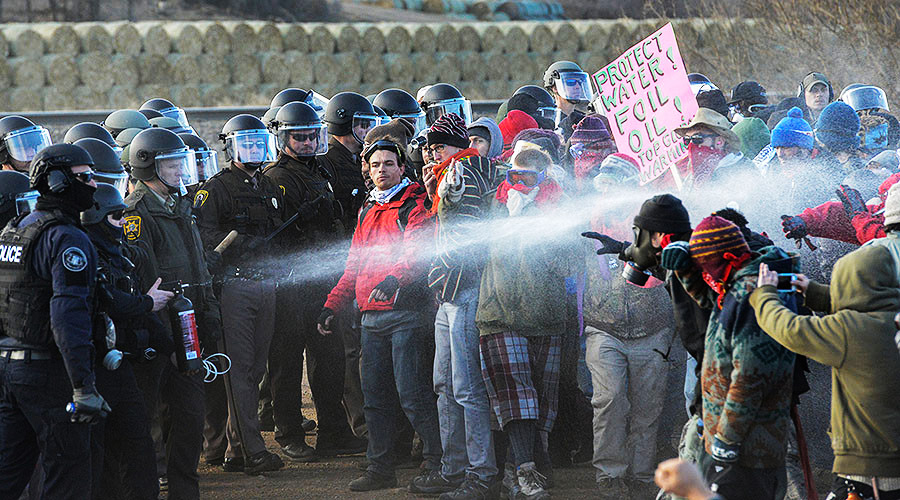 In the past few weeks, water protectors in North Dakota, working to stop the Dakota Access Pipe Line, have come under attack by an extremely militarized police force and mercenaries working for Energy Transfer Partners.

There appears to be a ramped-up sense of emergency from the Morton County Sheriff’s Department and the other forces that are working for Energy Transfer Partnership and the level of brutality by the government and corporate forces has also been ramped up. Now people have been seriously injured. A young woman’s arm was ripped apart by a concussion grenade. An elder had to be resuscitated from cardiac arrest after being sprayed with water in below-freezing temperature.

As the time line for the completion of the pipeline nears, the desperation of the oil company is increasing. Protectors have in recent weeks been shot at with live ammunition by DAPL workers. I was present when this happened. Shots were fired yards at where I was standing. Although the worker who fired the shots is known to police and there is a full video of everything that he did, he has not been arrested and continues to be out on the street. Meanwhile, arrests are continuing every single day for people standing peacefully in prayer, yet someone who shoots at peaceful protectors gets to walk free.

Similarly, as the completion date for the pipeline nears, major investors are getting more and more concerned that the pipeline will be delayed past the Jan.1 deadline.Some investors have already pulled their money from the project. The largest bank in Norway is trying to sell off its share of the pipeline. The Army Corps of Engineers has put a delay on drilling the pipeline under the river until further review as to whether the Standing Rock Sioux reservation was considered in the consultation for this pipeline.

Because of this Energy Transfer Partnership has filed an appeal saying that they have met all the requirements, but what has happened is that filing an appeal further delayed the pipeline until all sides can be looked at.

The fear that they will lose the $3.8 billion that this project is supposed to have generated and the fact that they have already sold some of the oil that is supposed to come from this pipeline (meaning they would have to pay that money back) has driven this illegal, immoral brutal attack on the water protectors–who in the face of all of this have stood their ground.

Over 300 people have been arrested, many have been tear-gassed, pepper sprayed, shot with rubber bullets, shot at with concussion grenades and now sprayed with water during freezing cold temperatures causing great harm and hyperthermia. Among the protectors over 200 were injured on November 20 but still they will not back down. When the people say water is life they mean that the water is their life: they are willing to give their life to protect that water.

On November 20 on the back Water Bridge, people were extremely brutalized. Sophia Wilansky remains in the hospital with a very serious arm injury; it is unknown whether her arm will have to be amputated as of yet but the damage is extensive. Sophia was trying to help a fellow water protector as he ducked under a truck to avoid being shot further with rubber bullets. Sofia tried to pull the man to safety when a concussion grenade landed in the crack of her arm exploding and causing severe damage.

Many other protectors were struck with rubber bullets and sprayed with water cannons in temperatures that were below freezing; many were treated for hypothermia. Some 30 million people viewed the videos of this brutality that were released the same day.

The people of Oceti Sakowin, Sacred Stone Camp, Red Warrior Camp, Two Spirit camp and all the other camps will not back down, they will not give up, they will be there until the Black Snake is defeated. Big Oil is acting out of fear. Their world is crumbling; the people will win out.