Days of action demand an end to deportations 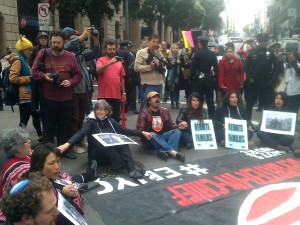 On April 4-5, people across the country rallied to tell President Obama: “Not one more deportation!” For months, heroic, militant actions led by undocumented youth have challenged the cruel, inhumane and racist deportations carried out by the U.S. government. ANSWER members joined these demonstrations in many cities. Below are reports from just some of the actions.

The "Not 1 More Deportation" rally, held at City Hall, was attended by over 100 people representing a wide range of communities across Southern California.

The protest demanded that all deportations stop immediately. Speakers called on the government to stop splitting families apart and reminded attendees of the 2 million people who have already been deported during President Obama's tenure in office, more than Bush before him. One speaker characterized Obama's legacy as that of "the Deporter-in-Chief."

One young man spoke about his experience being the child of someone who was deported, in addition to struggling to find a job while going to school all while he himself was undocumented. He urged the government to immediately halt deportations and to instead implement "humane" immigration reform.

This massive increase in deportations breaks a campaign promise made to the Latino community in order to get the president re-elected – namely, to make immigration reform a top priority – and also makes a mockery of the Democratic Party's campaign slogan of "Si, Se Puede."

Unanimously, the speakers agreed that the president could easily, through an Executive Order, immediately halt further deportations, but this would only come with increased pressure from immigrants and the wider progressive movement.

The rally ended with a show of continued solidarity for hunger-striking, undocumented workers being held in "for profit," privately run prisons across the country. Companies such as the GEO Group run a huge number of these facilities in which undocumented workers are held while facing deportation. The conditions they faced were already outrageous, but prisoners now face retaliation from GEO's guards for bringing much-needed public attention to the inhumane conditions where they are being held.

Around 150 people gathered in downtown San Francisco on April 4 to demand an end to the deportations of undocumented workers. Speakers noted that while the Republicans have been the primary culprits in stalling immigration reform, President Obama and the Democrats have still overseen the deportation of over 2 million people, breaking up families and ruining lives.

Twenty-six protesters, including ANSWER activist Frank Lara, formed a circle around the large banner, which labeled Obama “Deporter-in-Chief,” in a busy intersection. When police ordered the protesters to move, they refused and were arrested. Many of the protesters courageously and openly acknowledged their undocumented status, including 13 of those arrested.