Days of action demand freedom for the Cuban Five 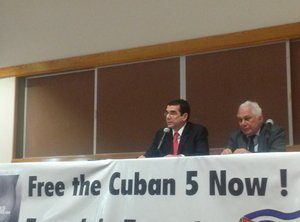 The week began with a well-attended press conference both on the case and highlighting events to come. Featured speakers included René González, one of the Cuban Five, who has been granted the right to serve his parole at home in Cuba. René continued to stress that until all his comrades were freed he did not consider himself to be entirely free, emphasizing that the time is as ripe as ever to continue to fight for the release of the Five. The press conference also featured famed leader of farm workers struggles Dolores Huerta and former editor of Le Monde Diplomatique Ignacio Ramonet. In attendance were several prominent international guests, including renowned Brazilian author Fernando Morais.

On the evening of May 30, Howard University hosted a meeting highlighting the role of Cuba in Africa, and its intersection with the case of the Cuban Five. Cuba’s heroic exploits in defeating apartheid and assisting national liberation movements in Africa were detailed, highlighted along with the fact that three of the Cuban Five were internationalist volunteers with Cuban forces in Angola, directly contributing to that victory. Speakers included Cuban Ambassador Jose Ramón Cabañas and Angolan Ambassador Alberto do Carmo Bento Ribeiro, as well as Glen Ford of Black Agenda Report and Eugene Puryear from the ANSWER Coalition.

The week of action also include a rally in front of the White House on June 1, attended by people from the D.C. area, New York City, Montreal and elsewhere, which also reached several hundred tourists visiting the area. The rally helped highlight the significant international participation, with banners flying in support of the Five from solidarity committees in places such as Quebec and Italy, with active participants from Vancouver, Argentina, and other Latin American nations. Notably, a large contingent of Cuban-Americans and Cuban immigrants from Miami had a vibrant presence. The rally was followed by an evening event at historic St. Stephens Church featuring Angela Davis.

Other events over the course of the days included meetings of legal experts discussing various aspects of the case and further legal efforts, as well as a meeting of trade unionists discussing the wide support for the Five amongst trade unions around the world. One of the Five, Antonio Guerrero, is an accomplished artist and on June 3 an art exhibit was held with many of his pieces, which also featured a panel discussion with many prominent names including Miguel Barnet, President of the National Union of Artists and Writers in Cuba.

The undercurrent beneath all of the events was the crucial important of the fight to free the Five. Cuba has been victimized by U.S.-sponsored terrorism for decades, as well as subject to a criminal blockade. The Five were on a mission aimed purely at protecting their own country, but as a result of the twisted anti-communist politics of the United States, were thrown in prison for interfering with the CIA-sponsored terror program. All people of conscience can't help but be revolted not only by the hypocrisy of the United States government, which kills millions in the name of fighting terrorism as they continue to imprison the Five, but by the blatant attempts by the U.S. government to bias the trial. In just one example, investigative reporting by Liberation newspaper and the National Committee to Free the Cuban Five, and the work of the Partnership for Civil Justice Fund, has revealed that the U.S. government illegally paid journalists to report negatively on the Five in an effort to tamper with the jury pool.

This blatantly political case has nothing to do with crimes or spying, but instead with the relentless attempt by the U.S. government to undermine the Cuban Revolution. Terrified of its example, the United States hopes to bury the revolutionary achievements of Cuba under mountains of propaganda, accusations of terrorism made up out of thin air and holding the Cuban Five in U.S. prisons.

The Five Days for the Five actions showed that in the United States and around the world, a jury of millions is assembling to pass judgment on the outrageous conduct by the U.S. government and to demand the immediate freedom of the four Cuban heroes still trapped in U.S. prisons!