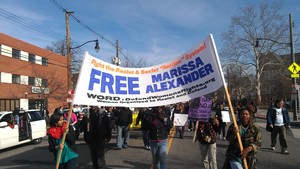 The WORD contingent at the Peace Walk 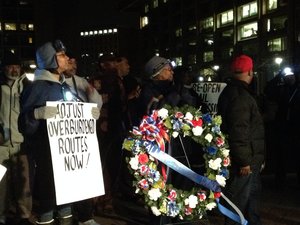 On Jan. 20, Washington, D.C., celebrated the Dr. Martin Luther King Jr. holiday not simply in remembrance, but in struggle. As Dr. King noted, the United States is afflicted by racism, poverty and war; fighting against these three “evils” was the centerpiece of his campaign for justice. While many choose simply to remember the general greatness of the man, those wishing to honor his true legacy seek to continue his fight. That spirit was clearly on display in the country’s capital.

For the eighth straight year, hundreds of people gathered in Southeast Washington, D.C., in the heart of the city’s Black community, for the Dr. Martin Luther King Jr. Peace Walk. This year’s theme, “Global Peacemakers,” highlighted those fighting around the world against war and other senseless violence, calling for an end to war-like policies abroad, as well as peace and unity in oppressed communities in Washington itself.

Also for the eighth straight year, the ANSWER Coalition was a sponsoring organization, participating in the planning and promotion of the event. The Peace Walk heard from ANSWER organizer Eugene Puryear, who urged the crowd to continue to fight against the triple evils identified by King and still afflicting the country and the world today.

Women Organized to Resist and Defend (WORD) marched alongside ANSWER as part of a contingent demanding freedom for Marissa Alexander. Marissa is a Black woman who until recently was unjustly imprisoned and is now being held under house arrest for firing a warning shot to deter an abusive partner. Marissa harmed no one, yet the same Florida court system through which racist murderer George Zimmerman was acquitted is prosecuting her a second time, after the first verdict was overturned. WORD marched with the Free Marissa Now Mobilization Campaign and others to demand that all charges against Marissa Alexander be dropped immediately and unconditionally, and for an end to the racist, sexist criminal "justice" system.

Activists advocating that the racist name of the Washington football team be changed also marched under the banner of "Change the Name Now," a campaign initiated by the ANSWER Coalition.

The issue of poverty was not neglected by the Peace Walk, and participants heard, in particular, from Wessita Mckinley of Sistas United, Inc., who spoke passionately about the plight of the unemployed and those fighting against the criminal cuts to unemployment benefits. The Peace Walk, which proceeds down much of the length of MLK Jr. Avenue, ended at historic Covenant Baptist Church with a program involving a number of cultural and other presentations, many conducted by young people. As always, the Peace Walk also conducted a clothing drive for needy families in the area.

Also on Martin Luther King Day, postal workers from around the D.C. metro area and up and down the East Coast marched to demand an end to the dangerous practice of delivering mail after dark. The rally was sparked by the murder of Letter Carrier Tyson Barnette in November of 2013 while working his delivery route.

The extension of mail delivery into the night hours is a result of the brutal cuts to the Postal Service being enforced by Congress and the Postmaster General, who are desperate to break the union and ultimately privatize the service.

Wearing head lamps and mostly in uniform, Postal Workers began their action with a rally at the Dr. Martin Luther King Jr. memorial on the National Mall. The rally heard from postal workers, community groups like the ANSWER Coalition and also from Tyson Barnette’s family, who travelled hours to attend the event. Following the rally, the workers and their allies marched to the Post Office headquarters, holding another rally restating their demands to end night delivery and placing a wreath in honor of Mr. Barnette in front of the building.

The rally was organized by Communities and Postal Workers United – a national organization of postal workers and allies fighting to stop the cuts to the Postal Service.