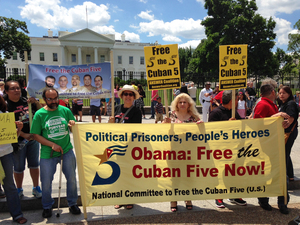 From June 4-11, a range of events took place in Washington D.C., discussing the case of the Cuban Five and U.S.-Cuba relations. The activities demanded the immediate freedom of the three members of the Cuban Five still held in U.S. prisons. The days of events began with a press conference, held at the National Press Club, and presided over by the NPC chairman, drawing a wide range of both U.S. and international media. In a fairly rare event the press conference drew positive coverage from the Washington Post, which wrote about events on upcoming days.

The press conference had two main themes that ran throughout all the events: the case of the Cuban Five and the current situation regarding U.S.-Cuba relations. Attorney Martin Garbus and author Stephen Kimber presented.

Also part of the actions was a two-day conference covering the two basic themes with the title “A New Era in U.S.-Cuba Relations.” Messages from and in solidarity with the Five opened the conference, the first session of which was headlined by actor Danny Glover, who expressed and explained his long-running support for the Five and the Cuban Revolution.

Further topics included updates on the case of the Five, prospects for ending the blockade, the recent revelations about USAID attempts at subversion, the long history of CIA-sponsored terrorism against Cuba, and the relationship between the Cuban Five and other political prisoners.

One highlight was the presence of Puerto Rican freedom fighter Rafael Cancel Miranda, himself a former political prisoner freed through mass struggle.

On June 6, a concert headlined by hip-hop group Dead Prez and a number of local D.C. artists was held. The concert served as both a part of the activities to free the Cuban Five, and also as a launch party for the new CD “Battle Cry for Cuba and Zimbabwe” featuring a range of artists deploying their talents in solidarity with the two countries.

June 7 saw hundreds of people gather in front of the White House for a militant picket line, followed by a march to the White House demanding freedom for the Cuban Five. The events ended June 10 with a reception at the Bolivarian Hall featuring presentations by many of the international delegates who came from 31 countries, as well as various U.S. groups in solidarity with Cuba and the Five.