D.C. march continues the struggle for justice for Michael Brown 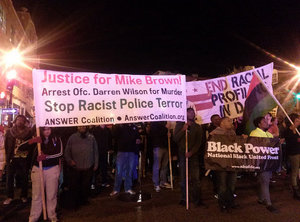 Following several weeks of marches and rallies that have taken over the streets in major commercial areas, protesters took to the streets Oct. 4 to demand justice for Mike Brown, stand in solidarity with the people of Ferguson, Mo., and demand police reform in the District of Columbia. Demonstrators gathered for a brief rally before marching into the elite Georgetown neighborhood.

As protests continue in Ferguson, people around the country are likewise continuing to show their solidarity, and join the call for justice and in opposition to police brutality that is rampant nationwide. Washington, D.C., is no exception. Rallies and marches have been taking place across D.C. over the past few weeks, from Howard University’s campus to Malcolm X Park to the Justice Department to the White House.

The march and rally built on all of these events, bringing together many organizations and individuals. The sponsors of the event included the National Black United Front, the ANSWER Coalition, We Act Radio, the Party for Socialism and Liberation, the American Muslim Alliance as well as independent organizing networks that have sprung up in the wake of Michael Brown’s killing.

Specifically, the demonstration demanded the arrest of Officer Darren Wilson, the demilitarization of the police, and the institutionalization of civilian review boards of the police with the right to hire and fire. Particular to D.C., the #DCFerguson Movement has placed significant focus on the so-called “jump-out” phenomenon, a military-style set of tactics that routinely violate residents’ civil rights.

The call to action issued for the march explains: “Residents of the District of Columbia, just like millions around the country, recognize that at the root of Ferguson are the social, racial and economic injustices that exist nationwide. They know that Ferguson could really be anywhere and Michael Brown could be any young Black male. According to a report by the Malcolm X Grassroots Movement, every 28 hours a Black person is killed by a police officer, security, or a vigilante in the United States. There is almost complete impunity for the perpetrators of most of these crimes. The political marginalization and racialized poverty that exist in Ferguson are replicated in communities across the country.

“The murder of Michael Brown and the situation in Ferguson can and should be a turning point where we finally come to terms with the root causes of these issues and address social deprivation and oppression and the police brutality that comes with it.”

Click below to view a slideshow of photos from the demonstration