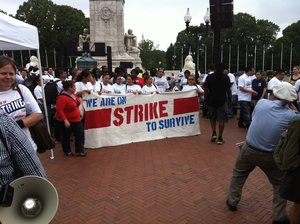 On May 21 hundreds of low-wage workers from across Washington D.C. took part in a strike for higher wages. The strike follows closely behind strikes by poorly paid workers in five other cities: New York, St. Louis, Milwaukee, Detroit, and Chicago. The strike brought workers together from the Ronald Reagan Building, several Smithsonian museums and Union Station—one of the city’s main transit hubs. Most of those on strike were service workers of some kind including many janitors and fast-food workers who are employed in the food courts of the various locations.

The strike culminated in an action at Union Station where workers marched into the building in the middle of the lunch time rush significantly interrupting operations at the station. They gathered in front of the station’s A. Phillip Randolph statue to both honor the labor leader and link their fight to the long history of workers struggles in the United States. Randolph, famously the organizer of the Brotherhood of Sleeping Car Porters, 1948 March on Washington Movement and 1963 March on Washington, served as a particular inspiration for many of those on strike because of his history. A significant majority of strikers were Black and the rest Latino. Randolph’s twinning of labor rights and opposition to racial discrimination clearly resonated with those on strike given the unavoidable reality that most low-wage workers in major cities are people of color.

A number of workers shared their personal stories at a rally, and told of the disgusting conditions they are forced to deal with. Janitors at Union Station, for instance, mentioned the fact that they have no benefits, paid sick days or paid holidays, not to mention any affordable health insurance. Almost all the workers make the D.C. minimum wage of $8.25, and discussed the near impossibility of supporting themselves and their families. In the United States $12 an hour, assuming one works full-time, puts a person right at the official--and shamefully low--poverty line for a family of four.

In other words the workers on strike were almost uniformly making below-poverty wages.

An interesting aspect of the Washington strikes is the fact that all of these workers are working at business sub-contracted by the Federal government. That is, they are being paid poverty wages with Federal dollars. As many at the rally pointed out President Obama could raise their wages with the simple stroke of a pen by issuing an executive order. In fact, President Obama could lift the national living wage with an executive order as well.

Those on strike in D.C. and around the country are demanding the President end this shameful state of affairs, and are pledging to both continue and escalate their actions until decent wages, benefits and living standards are achieved.