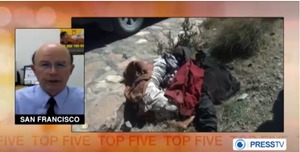 Below is a transcript of an April 23 interview Press TV held with Richard Becker, West Coast Coordinator of the ANSWER Coalition. Click here to watch the video

Press TV: As the US is preparing for a possible true withdrawal from Afghanistan, what will happen to the drone program? I mean, how likely will that be scrapped too?

Becker: Well, it appears that the drone program, especially based on the events of the last couple of days, the drone program is unfortunately alive and continuing and maybe intensifying and so this represents a great danger to the population in Afghanistan as well as Pakistan, Yemen, Somalia as you mentioned.

Press TV: And of course the fact that the drone program is internationally illegal and violates the sovereignty of the targeted nation and nations - including Yemen and Somalia and other nations - just how much can Afghanistan follow the case and sue the United States for this?

Becker: Well, I think that we have seen that in the international bodies like the International Court of Justice and the International Criminal Court, the latter the United States refuses to join stating openly that it won’t join because its military forces could be subject to criminal prosecution if it were a member of the court.

But these bodies have very much been under the control of the big Western powers - the United States, Britain France, and Germany. Really the imperialist powers in the world today dominate them and really mete out justice to those who they have targeted, primarily thus far in Africa and in the former Yugoslavia.

So there is no real international justice. I mean, I don’t believe that the Afghan government could not bring a case but it is very unlikely either a court in the United States or the international bodies that I have mentioned will allow them to bring it.

Press TV: And will compensations be given to the victims, the civilians that is?

Becker: Well, we of course don’t know who are civilians and who are combatants. And in fact, United States is not at war officially with any of these countries. So in fact, they all are in reality civilians.

But the United States does compensate with small amounts of money the families of some people they judge to be civilians. But that does not provide any justification whatsoever for what you mentioned before, the clear and really terrible violations of international law.