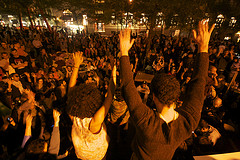 New Yorkers: Be at Liberty Plaza, Friday between midnight- 6am!
Everyone else: Flood the Mayor's Office with calls and letters!
Click this link to send your letter

In addition to forcing an evacuation of the park on Friday at 7am, Bloomberg has announced that all bedding, mattresses and tarps will be banned from the park, and it will be illegal to "lie down" there. This is a blatant attempt to end Occupy Wall Street altogether.

Organizers of OWS and a coalition of community groups has called for all people of conscience to come to Liberty Plaza Friday between Midnight and 6am to defend the occupation.

Wherever you are, call 311 (or +1 (212) NEW-YORK if you're out of town) to tell Bloomberg "Hands Off Occupy Wall Street!" and send him a letter by clicking here.

Occupy Wall Street has a Sanitation Working Group that has kept the park clean over the last four weeks, and teams of volunteers have been working furiously all day to clean it further.

It is no surprise that Bloomberg and his billionaire friends would want to see an end to Occupy Wall Street. The occupation there has sparked a nationwide movement, gaining momentum by the day, in which people from all walks of life have united in opposition to the Big Banks.

The NYPD has already been used repeatedly to harass, brutalize and mass arrest peaceful protesters. We must stand together against these repressive tactics, so this movement is able to grow and develop.

Be at Liberty Plaza tomorrow between Midnight and 6am!
Wherever you are, call 311 (or +1 (212) NEW-YORK if you're out of town) to tell Bloomberg "Hands Off Occupy Wall Street!" and send him a letter by clicking here.