Dec. 4-6: Rallies to Defend the Bolivarian Revolution in Venezuela 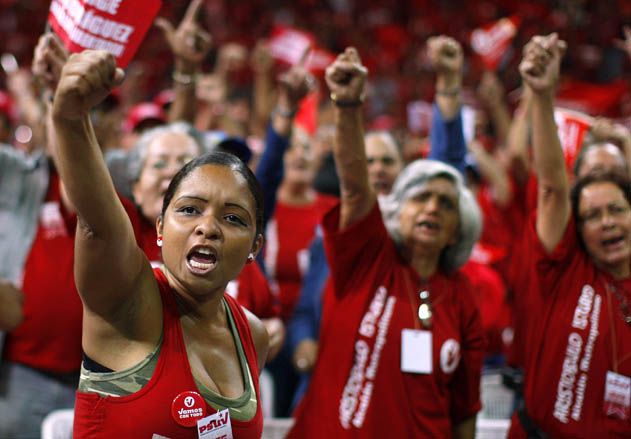 This is a critical time for the Bolivarian Revolution of Venezuela.

For years, the U.S. government has been financing and promoting a destabilization campaign with the objective of overturning the tremendous progress for the Venezuelan people, first launched by Hugo Chávez’s presidency of 1999.

President Nicolás Maduro, the National Assembly progressive members, government leaders and the Venezuelan pro-Bolivarian masses, are struggling to continue and advance the revolutionary process, while standing up against a vicious right-wing campaign of violence, illegal attacks on the democratically-elected government, false accusations by the U.S. government and its corporate allies in Venezuela.

More than 16 years of a radical process by Venezuela’s democratic Bolivarian Revolution has lifted up millions from poverty, eliminated illiteracy, provided a healthcare system available to all, has built almost 1 million new housing units, with more to come. But it is threatened by the United States government’s attempt to restore the Venezuelan capitalist class to political power.

The real aim of the U.S. is to re-capture Venezuela’s oil reserves, the largest in the world, and to destroy ALBA (the Bolivarian Alliance for Latin America). ALBA, founded by Cuba and Venezuela, today includes Bolivia, Ecuador, Nicaragua and some of the Caribbean states. It is an alliance of resistance to the long and destructive history of U.S. domination of Latin America, and Washington desperately wants to smash it.

On Sunday, Dec. 6, elections will take place for all seats in the National Assembly.

The Cuba and Venezuela Solidarity Committee, together with many progressive forces worldwide, are calling on people in the United States and around the world to join together with rallies and other actions to demand:

Initiated by the Cuba and Venezuela Solidarity Committee.