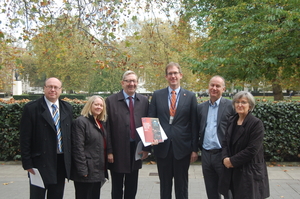 This morning [Nov. 6] a high level delegation representing millions of people from across the globe met with US Government officials to hand over the final report of the International Commission of Inquiry into the case of the Cuban Five.

The delegation was made up of parliamentary representatives, Trade Unions, lawyers and NGOs and included two members of the British Parliament Cathy Jamieson MP, and Grahame Morris MP. Len McCluskey, General Secretary of UK’s largest trade union Unite, represented the global trade union movement and barrister Elizabeth Woodcraft, who was one of the coordinators of the International Commission of Inquiry, came on behalf of the legal community. Rob Miller, Director Cuba Solidarity Campaign, represented the thousands of supporters and organisations who made up the international coalition 'Voices for the Five' which had organised the Commission of Inquiry in March 2014.

The delegation described the standing of the International Commission of Inquiry and the rigour of its investigations into the case held over two days of intense scrutiny in March 2014 in London. The Commission had been presided over by three eminent international judges from France, India and South Africa.

Len McCluskey set out the three key findings from the Commission report: Firstly, that none of the conduct of any of the Five was aimed at the United States of America or its Government. Secondly, the Commissioner’s report urged President Barack Obama to grant humanitarian pardons and immediately release the remaining three prisoners. Thirdly, that the granting of such Presidential pardons has the potential to contribute substantially to the normalisation of relations between the United States and Cuba.

Len McCluskey, who led the delegation, said “We are here representing millions of people from across the world who are now asking President Obama to grant humanitarian pardons for the three remaining Cubans held now for 16 years in US jails. At the same time we would like to see the release of the US contractor Alan Gross who has been held in Cuba for the past five years. It is time for all four of these men to be freed and returned to their families”

Cathy Jamieson MP said “This issue is one that is widely supported by UK parliamentarians. MPs have raised this case repeatedly over many years though the tabling of Parliamentary questions, meetings in the House of Commons and Parliamentary motions. In 2013 126 MPs signed a parliamentary motion calling for visitation rights and in support of the Five. We want to see the United States end this human tragedy as soon as possible”

Rob Miller, Voices for the Five, said “Last week's editorial in the New York Times reflected international opinion that whatever the history of the two cases, whatever the circumstances, 16 years is long enough and now is the time to reach out, find a solution, and send Alan Gross and the remaining three Cubans home”

Kevan Higgins, First Secretary Political Affairs said that he welcomed the chance to meet with the delegation and hear about the case. He quoted from a two page report sent over from Washington which reiterated the US position that there was no equitability between the work of the three Cubans who were engaged in ‘espionage’ and that of Alan Gross who was ‘purely an aid worker’.

There were however interesting and fruitful discussions and details were exchanged about various avenues to look at which could assist with progress towards possible solutions to the two cases.

Mr Higgins assured the delegation that the appeal for humanitarian pardons and the copies of the Commission report would be delivered to both US Ambassador Matthew W. Barzun and to President Obama in Washington.

The International Commission of Inquiry report can be viewed in full here: http://www.voicesforthefive.com/commission/report/