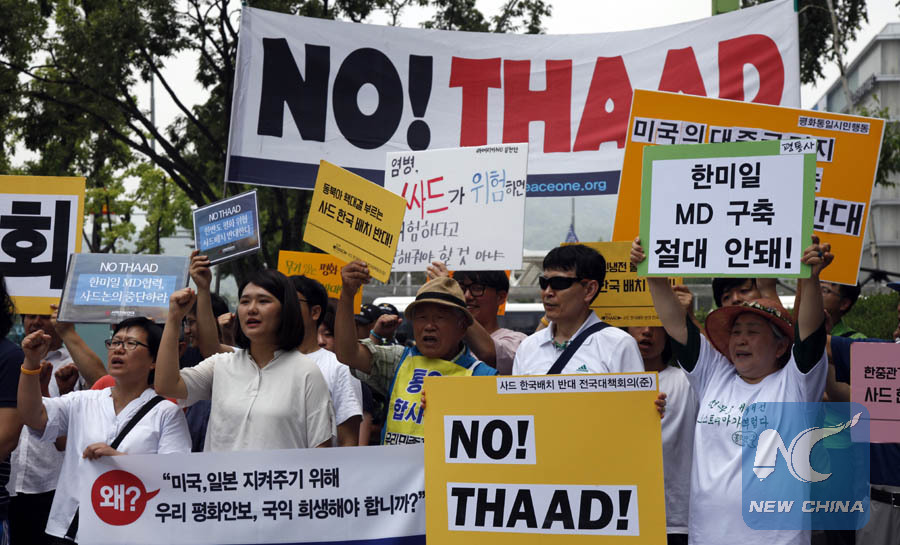 The Stop THAAD in Korea and Militarism in Asia and the Pacific (STIK) and the Channing and Popai Liem Education Foundation are sponsoring a solidarity peace delegation to South Korea, July 23-28. Our aim is to strengthen U.S. solidarity with Koreans opposed to THAAD who are also waging the fight against all aspects of U.S./ROK militarism in Korea.

The document below is the official statement of our delegation. We are appealing for organizational endorsements and individual signers. Your support will add a great deal to our efforts to build solidarity with progressive forces in Korea and create a foundation for collectively addressing our mutual interests in peaceful, negotiated settlement of all conflicts.

Fill out the Endorsement Form here. Deadline: July 19 (end of the day).

Below and attached is the official statement of our delegation that we are asking you to endorse:

Under cover of darkness a Terminal High Altitude Area Defense (THAAD) missile defense system was installed in Seongju City, ROK in April 26 this year, in spite of daily and growing opposition from local villagers and their nation-wide supporters and without official deliberation by South Korea’s governing bodies. Protesters correctly fear that its deployment will strain their country’s already delicate relationship with China, embolden militaristic and anti-democratic political forces in their own country, and exacerbate tensions between North and South Korea. They also worry about potential negative health and environmental effects associated with the operation of the THAAD radar system, and defilement of sacred lands like the nearby pilgrimage site of the Won Buddhist community.

U.S. and some ROK officials claim the THAAD system will protect South Korea from the threat of North Korean missiles. However, because it is stationed 135 miles south of Seoul, virtually all observers agree that the 25 million Koreans living in the capital city area fall outside THAAD’s protective shield. Even more damning, missile defense expert, MIT physicist Ted Postol, adds there is no demonstrable evidence that THAAD is effective under live fire conditions with multiple incoming missiles and decoys. On the other hand, THAAD radar in South Korea has the capacity to monitor missile systems in China, which many suspect is a chief U.S. objective in insisting on stationing it in Korea. China has voiced its opposition to THAAD in Korea in no uncertain terms, enacted economic retributions against South Korea, and threatened an accelerated arms race.

The U.S. THAAD deployment in South Korea is part of the U.S. “pivot” to the Asia Pacific. It expands the already significant network of U.S. missile defense systems encircling China and Russia. This effort to boost declining U.S. political and economic influence in the region comes at a high cost, however, to the American people. It diverts billions of dollars away from critical domestic needs at a time of decaying infrastructure, unprecedented economic inequality, and limited access to basic human services. It also compromises the principles as well as safety of peace-loving Americans by intensifying regional military tensions, fuelling a new arms race, and threatening a renewed outbreak of fighting on the Korean peninsula, this time involving nuclear weapons with unimaginable consequences for human life.

The U.S. deployment of THAAD also complicates North/South Korean relations at a time when North Korea has offered to freeze its nuclear weapons program in exchange for an end to or significant reduction in annual U.S.-South Korea war games. This proposal was routinely rejected by the Obama administration. But today a growing number of respected U.S. officials and policy analysts such as Richard Haass, president of the Council on Foreign Relations, Jane Harman, former congresswoman and head of the Woodrow Wilson International Center for Scholars, and William Perry, Secretary of Defense during the first Clinton administration, have expressed support for considering a freeze and halting war games as a first step toward addressing North Korea’s security concerns as well as those of the U.S, its allies, and China and Russia in light of North Korea’s progress in producing nuclear capable ICBMs.

Most Americans know nothing about THAAD, the opposition of South Koreans to its deployment, or recent diplomatic overtures by North Korea to reduce tensions on the peninsula. Even fewer remember the Korean War, are aware that the U.S. retains war time control over South Korea’s armed forces, or understand the desire of the Korean people to achieve the peaceful reunification of their country. Yet, these unknowns should be of vital concern to people in the United States. Should the fragile armistice agreement that halted the fighting but did not end the Korean War give way to renewed fighting, we, along with Koreans in the North and South and countless others in the region will suffer untold losses. In the words of U.S. Secretary of Defense, James Mattis, “…if this goes to a military solution, it is going to be tragic on an unbelievable scale…”

At this critical moment, the U.S. and South Korean governments can continue to fuel the fires of war in Korea by further militarizing South Korea or take steps to create international conditions for a lasting peace in Korea. Whichever path the U.S. adopts will be done in the name of the American people. It is, therefore, incumbent upon citizens of the U.S. to engage and work with the people of Korea to arrive at mutually agreeable, peaceful means to resolve hostilities in the region. Beginning this collective work is a primary goal of our delegation.

The Solidarity Peace Delegation travels to South Korea to express the solidarity of peace-loving Americans to those in Korea fighting the THAAD deployment and seeking a fundamental resolution to conflict on the peninsula and in the region. We aim to strengthen mutual understanding about how to achieve these objectives with the goal of aligning U.S. policy with the desire of the Korean people to achieve a lasting peace on the peninsula and, ultimately, the peaceful and independent reunification of Korea.

Recognizing the immense social and economic costs of increased militarization of Korea for both the American and Korean people, the Solidarity Peace Delegation calls upon the governments of the United States and the Republic of Korea to:

Finally, we state our intention to build solidarity in the U.S. for the struggle against the stationing of THAAD in South Korea and the expansion of U.S. militarism in Asia. We also call on peace-loving people in the United States and globally to join us in this effort.

Will Griffin, Veterans for Peace, Task Force to Stop THAAD in Korea and Militarism in Asia and the Pacific

Juyeon Rhee, Task Force to Stop THAAD in Korea and Militarism in Asia and the Pacific

Organizational and individual endorsers of the statement will be listed below the sponsors and delegates. To add your endorsement, please fill out the Endorsement Form no later than July 19, 2017 (at the end of the day).