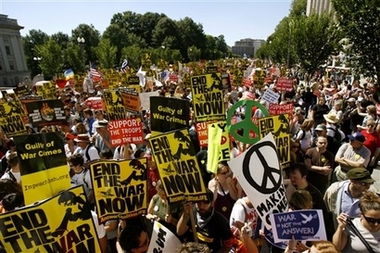 The Sept. 15 March on Washington was unique.

The energy, the youth, the multitude of new people who were joining a protest for the first time; the large number of Iraq war veterans as well as active duty service members; the determination of Gold Star family members to unite together in the streets against the war that stole the lives of their children and the inspired willingness of thousands to die-in and risk arrest—these were the features that made Sept. 15 somewhat more akin to the militant marches and actions that became a characteristic feature of the movement that helped end the Vietnam War.

The people who attended knew this to be true. This was not the same crowd strolling down the street. What the people saw and felt and experienced and knew to be true could not be easily erased by the typically bad, cynical and misleading corporate media coverage.

Tens of thousands of people, led by Iraq war veterans, Gold Star families whose loved ones were killed and other veterans, marched shoulder to shoulder across eight lanes of Pennsylvania Avenue. The police suddenly locked together barricades which were taken down just as quickly as the Iraq veterans led the march straight up the broad sidewalk leading to the Congress where they were again violently blocked by platoons of riot clad police.

People marched forward towards the steps of the Capitol determined to carry their anti-war message as the heavily armed police attacked and blocked peaceful protestors. Thousands joined a Die-In and symbolic funeral for the US Servicemembers and the legions of Iraqis who have perished in this criminal endeavor. Police reinforcements with shields and helmets marched down the steps of the U.S. Capitol building with guns and sticks in hand.

Iraq war veterans and the family members of soldiers and marines, joined by thousands upon thousands of high school and college students, stood face to face with a line of armed force that prevented their forward march to redress grievances for an illegal war and occupation.

Police forced Iraq War veterans and elderly veterans of other wars face into the ground and tied their hands behind their backs. Men and women in fatigues, students, mothers of soldiers and members of the American Muslim community were taken away in handcuffs and marched or dragged up the long Capitol steps.

More than 190 were arrested in all and when they were brought to jail together it was obvious that their spirit and solidarity was a testament to their determination to resist the war machine. Throughout the demonstration, and among those who were detained too, a collective spirit was crystallizing. Almost everyone could sense that something was new.

People were held on busses, many in tight cutting handcuffs, until the early morning hours. When finally processed at the police vehicle garage where everyone was held, people were directed to a door leading to an alley uncertain where they were, what they were to do or what would happen next as the door closed behind them. But as each person stepped outside a few yards and was seen a great cheer went up and across the street they saw people on the grassy embankment waiting for them. ANSWER organized hundreds of supporters and a legal team that stayed outside the jail all night long and greeted each newly released person with coffee, food, rides to the bus station or home if they lived in the DC area.

Before the action the government undertook significant efforts to try to suppress and repress the organizing efforts. The ANSWER Coalition (Act Now to Stop War and End Racism) was slapped with $38,000 in fines for putting up 194 posters that were legally wheat pasted announcing the Sept. 15 action. ANSWER was told they had to be taken down immediately, and refused. Instead, we filed a suit with the Partnership for Civil Justice challenging the constitutionality of the government’s actions.

When ANSWER held a press conference in front of the White House to protest the fines, the police from the National Park Service arrested the speakers and organizers—and horse-mounted police charged into the assembled media.

Ironically, this police attack in front of the White House came hours after Laura Bush gathered the media together inside the White House to condemn the police crackdown of “pro-democracy activists” in Myanmar.

If anything, the government’s attempts to suppress these efforts not only failed but also drew additional thousands, and perhaps tens of thousands, of angry people to the streets.

When the large crowd, with so many high school and college students in attendance, poured into the streets around 1:00pm on Sept. 15 the excitement and buzz was palpable. People knew they were part of something very special, something different from the earlier anti-war marches. It wasn’t just the large crowd, which was marching 120 abreast, and filling up all eight lanes of Pennsylvania Ave. for many blocks. The march was impressive and new at other levels as well. ANSWER initiated the action and provided hundreds of organizers and volunteers. These people were the organizational and administrative anchor of the protest. But this was not an action of one group or entity.

The groups achieved an admirable level of cooperation and comradely working relations based on mutual respect and shared responsibility. Many other organizations also contributed. Ramsey Clark and thousands in the ImpeachBush movement mobilized as well.

As a response to the fascist mobilization of the so-called Gathering of Eagles, numerous local and national organizations joined together to offer a united security team.

Sept. 15 may be a harbinger of an even greater unity in the anti-war movement among Iraq war veterans and military families, the Arab American and Muslim communities, students and youth, the immigrant rights movement and other oppressed working-class communities—both those who are already unionized and the millions who need to be.

In our ongoing evaluation of the action, we will have to assess not only its strengths but any of its defects, weaknesses and mistakes. It is not possible to have such an energized action with many tens of thousands of people without there being a fair share of mistakes to learn from. None of the defects, however, can take away from the broader significance of the action.

The rest of the night those released earlier and other solidarity activists had the great privilege of welcoming people as they got out of jail and shuttling individuals to the bus and train stations between 1:00am and 8:00 am the next morning.

We got a chance to meet and learn the stories of these brave souls. Many were Iraq war veterans and young students for whom this was their very first demonstration and their first arrest. They were inspired, pumped up and eager to keep mobilizing. They were proud of what they had done.

Many people told us in person, and in emails and phone calls, that Sept. 15 was an event of great importance in their life and outlook.

There is no scientific method to assess how many people fit into this broad category, but by the anecdotal feedback we believe this was a large group.

People come into the streets, risk arrest, join a movement and become activists because they have certain hopefulness that their actions can make a difference.

We have been through a period of pessimism and political apathy—hallmarks of generalized mood where the mass of people do not have the confidence that change is possible. But on September 15 it felt that this may be changing.

On Sept. 20, just five days after Sept. 15, tens of thousands people traveled to Jena, La. to stand with the Jena 6 and the African American community.

These two events coming within one week’s time are the first signs that we are waking to a new morning of action, resistance and militant struggle. New movements are not born in the minds of social critics and Ivory Tower observers. They are forged in the streets. Real people, volunteering their time and ignoring the armies of naysayers, are the ones who ignite new historical processes. This movement is coming together because it is needed. Its time has come.

By acting together against war and racism, and linking this movement to all the needs of society that are being sacrificed and destroyed by the power of corporate domination, we can fill the void and vacuum left by the earlier collapse of the progressive movement.

Sept. 15 in Washington, D.C. was a meaningful day and for some a life-altering day. It will be remembered as significant in a broad historical sense if it emerges as a step toward an even greater development. That is the goal and task of all those who are committed to waging a broad struggle for the radical transformation of this country.

That, and nothing less, is the order of the day.

Brian Becker is the National Coordinator of the ANSWER Coalition.