Democracy under attack in South Korea 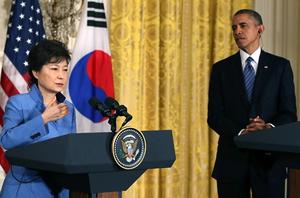 The following appeal was issued by the newly formed Solidarity Network for Democracy in Korea. The ANSWER Coalition encourages all of its supporters to sign the petition referenced below.

Hard-won democracy is under a serious attack under Park Geun-hye administration, which has been in power only less than one year.

Especially, interference and surveillance by the Korean National Intelligence Services have increased, and government repression of the social movement has intensified. And then there is Lee Seok-ki's case pending in court as the prime example. While there may be different opinions and perspectives about the Unified Progressive Party, I hope you will agree with us that the attack on the UPP in and of itself has been a strategic "divide and conquer" move to weaken the progressive movement by the government. If the government is successful in banning the UPP, there will be more severe attacks on democracy, and without people's resistance, the progressive social movement of South Korea will suffer great setbacks.

Although the news media has been really quiet about Lee Seok-ki, his trial is now ongoing and will be decided by the end of January. It has been revealed in the trial that the prosecution's key evidence, the transcript of the audio recordings, contained 272 "errors" in the original version that was leaked to the media and was the basis for the indictment.

The Task Force against State Repression is now urgently collecting petitions/letters to the presiding judge (the Honorable Kim Jong-Woon) in the case urging a fair trial.

As people living in the U.S. who are concerned about democracy in South Korea, some of us plan to create the "Solidarity Network for Democracy in Korea (Sol-Net Korea)" so that we can work with the progressive movement in South Korea in more timely fashion, issuing needed statements, circulating petitions, op-eds, and publicizing the people's dire struggles against government repression of democracy. The conscientious people in the United States have played an important solidarity role in disseminating truthful news to the international communities, providing and increasing public pressure on the South Korean government, and encouraging people in South Korea by standing by them in spirit.

Now, you are cordially invited to:

1) Join the Sol-Net Korea --> if you are interested, please send an email to [email protected], your name, city and country, and email address for our listserv;

3) Please send this statement to your friends, comrades, and colleagues and help spread the words to the conscientious people in the United States