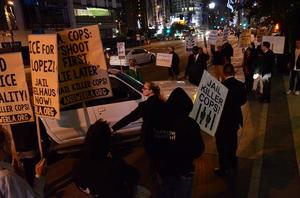 On Nov. 16, the Los Angeles Police Protective League hosted its annual “In the Line of Duty” Awards Gala. Victims and families of innocent people killed by police, L.A. community members, and organizations like WORD (Women Organized to Resist and Defend), the National Brown Berets and the Young Survivors Legacy Support Network held a picket outside the event to highlight the multiple cases for which there has yet to be justice. The protest was initiated by the ANSWER Coalition.

Those entering the ceremony were met with chants demanding justice for different victims of police brutality. To the vast majority of poor and working class people in Los Angeles, the police are violent racist oppressors who harass and brutalize, not protect and serve. The Los Angeles Police Protective League defends officers who commit acts of brutality, misconduct and corruption by developing public relations campaigns.

After the picket, which was warmly received by people passing by, protestors organized a speak-out. Gisela Santiago of WORD said, “The real people who deserve the awards tonight are the mothers, sisters and daughters, who have lost their loved ones due to police brutality.” The anti-police brutality movement in California has many dedicated women leaders who have lost their loved ones and have dedicated their lives to fighting for justice.

Genevieve Huizar is one of those mothers who lost her son Manuel Diaz, whose death at the hands of the Anaheim Police Department led to the Anaheim Uprising in July 2012. At the demonstration, Genevieve vowed to continue to fight for justice for her son and for all victims of police brutality.

Until real justice is served, families and their supporters will continue to demand an end to police brutality at every gala and every award ceremony!