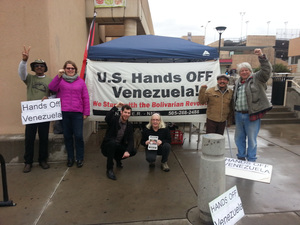 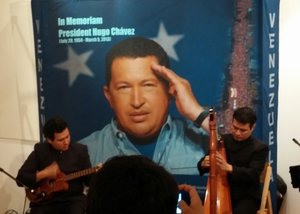 Ever since the U.S. government-backed campaign of violent destabilization began in Venezuela last month, people around the world, including in the United States, have taken to the streets in solidarity with President Nicolas Maduro and the country’s ongoing revolutionary process. This has taken on even more significance with the one-year anniversary of the late President Hugo Chavez’s death on March 5. You can also read reports from similar actions in Washington, D.C., on Feb. 15, again in D.C. on Feb. 19, Chicago on Feb. 22 and Los Angeles on Feb. 23.

Despite harsh winds and rain, people gathered on Central Avenue in front of the University of New Mexico in Albuquerque March 1 in an informational picket line to express solidarity with the Bolivarian Revolution.

Called by ANSWER New Mexico and endorsed  by several progressive organizations including Stop the War Machine, Veterans for Peace and Stop $30 Billion to Israel, the demonstrators held signs demanding that the United  States stop intervening in the affairs of the sovereign nation of Venezuela with the aim of overthrowing the democratically elected government of Nicolas Maduro.

Leaflets documenting more than 12 years of support by the United States for a coup d'etat against first Hugo Chavez and now Nicolas Maduro were handed out to passersby and were well received.

Signs stating "We stand in solidarity with the Bolivarian Revolution" and "USA/CIA hands off Venezuela" were visible, and many drivers honked their horns in solidarity.

On March 5, a diverse group of about 150 packed Bolivarian Hall to honor the memory of Hugo Chavez on the one-year anniversary of his death. The Bolivarian Hall, dedicated to the Revolution which shares its name, was packed full of supporters of President Nicolas Maduro and the people of Venezuela.

To celebrate Chavez's life and memory, Gabriel Torrealba, the Venezuelan First Secretary of Consular Affairs, presented a timeline of Chavez's life, which matches the one at Chavez's burial place outside Caracas. Torrealba recounted Chavez's life, outlining the tremendous advances for the Venezuelan masses under the Bolivarian Revolution along the way. It was abundantly clear that among the crowd—members of the working class from Washington to El Salvador to Venezuela—Chavez's memory is as potent and inspirational as it was during his lifetime.

Beginning under his leadership, Bolivarian Venezuela courageously broke free from the rule of exploiters, both foreign and domestic, as Chavez helped set into motion Venezuela's trajectory as a centerpiece for resistance to U.S. designs for domination in Latin America. Chavez's leadership helped pave the way for the formation of the Bolivarian Alliance for the Peoples of Our America (ALBA), a trade organization built around the interests of Latin American countries, rather than those of the United States and Canada, meant to challenge NAFTA, the OAS and other imperialist institutions.

Bolivarian Venezuela also extended solidarity to Cuba during the depths of the Special Period, when the country came under especially intense attack by the United States as it faced economic crisis after the dissolution of the Soviet Union. As Cuba was forced to weather an economic siege led by the most right-wing elements in Washington, Venezuelan trade represented a lifeline, offering much-needed access to global trade and offering oil at discounted prices.

Chavez's displays of friendship were not limited to Cuba: under his leadership, Venezuela offered to ship 1 million barrels of oil and $5 million to New Orleans following Hurricane Katrina. His legacy is one of friendship and anti-imperialist unity in Latin America.

The event at the Bolivarian Hall paid tribute to Chavez's history of courageous service to the people and the revolution. The event, ending with a reception featuring music from Chavez's home region in the plains of southern Venezuela, helps preserve the legacy of one of the most important figures for the people of Venezuela and the world.