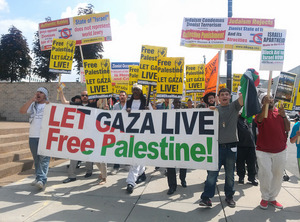 On the Sunday of Labor Day weekend, hundreds rallied and marched through the streets of Detroit demanding an end to the siege of Gaza. They came in response to a Call to Action issued by a broad coalition of anti-war, Muslim and Arab-American groups, who joined together to organize a response to the ongoing war crimes and crimes against humanity being committed by Israel in Gaza with U.S. support and funding. The demonstration was announced following the march of tens of thousands that took place on Aug. 2 in Washington, D.C.

The group gathered in front of the Cobo Center in downtown Detroit, with participants coming from various cities in Michigan, and from Ohio, Indiana and other neighboring states, as well as some from Washington, D.C. Under the blazing sun, the march weaved throughout the downtown area, stopping in front of the offices of the Detroit News and Detroit Free Press, and the Federal Building, before returning for a closing rally at the Cobo Center while many people looked on.

Click here to view a slideshow of photos from the demonstration

The rally was chaired by Hasan Newash of the Palestine Cultural Office in Dearborn, Mich. Speakers at the rally included Mahdi Bray of the American Muslim Alliance; Nihad Awad, Executive Director of CAIR, the Council on American Islamic Relations; Abbas Hamideh from Al-Awda – Cleveland; a representative from American Muslims for Palestine; local organizers from Detroit and more.

At the rally, Sarah Sloan spoke on behalf of the ANSWER Coalition, delivering the following message:

"We are here today as part of a global movement of solidarity with the people of Gaza and with the just struggle of the Palestinian people.

"We are here to demand that the United States government end all aid to Israel. U.S. taxpayers’ money to the tune of $4 billion each year goes to Israel. Israel is the largest recipient of U.S. aid. That money goes to buy missiles, bombs, tanks, fighter planes and attack helicopters. That U.S. money was used in the last month to kill 2,000 people – mostly civilians, including hundreds and hundreds of children and babies.

"We are here today to demand a complete and immediate end to the siege of Gaza, an end all U.S. aid to Israel, and the indictment and prosecution of Benjamin Netanyahu at the Hague for war crimes.

"The ANSWER Coalition has launched a letter-writing campaign to demand that Netanyahu be prosecuted by the International Criminal Court for genocide and war crimes. You can send a letter to the ICC Secretariat through our website, www.AnswerCoalition.org.

"We the people of the world must do what we did 25 years ago when the global movement helped the oppressed people of South Africa end apartheid. Until it came to an end, the United States was the biggest backer of South Africa. It was the intensifying grassroots movement that shifted the balance. That’s why we are marching in Detroit. That’s why tens of thousands of people marched in Washington, D.C., on Aug. 2.

"The Israeli war machine thought they could smash the resistance in Palestine. They failed in this strategic objective. They succeeded in creating an ocean of human suffering in Gaza, but it is the Israeli regime and their backers in Washington who have suffered a strategic defeat.

"The Palestinian people are strong. They are an inspiration. And their struggle has ignited a global movement of international solidarity that will help turn the tide."