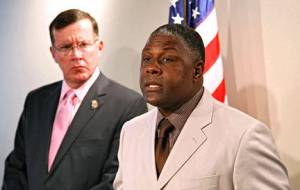 The following report was issued by the Syracuse branch of the Party for Socialism and Liberation.

William Fitzpatrick, the Onondaga County district attorney, has been hard at work over the last few weeks brushing police brutality under the rug and helping to exonerate killer cops.

The allegations of brutality filed against the Syracuse Police Department stem from the videotaped July 30 arrest of Edward Jones on the city’s Northside. Cell phone video footage clearly shows one police officer walking Jones down a sidewalk to a police cruiser. Jones is restrained in handcuffs and another police officer is seen in the background. When the first officer approaches the cruiser, he slams Jones’ head on the side of the car before placing him in the backseat.

The video footage was leaked to the press the next day, and there was palpable anger toward the police throughout the community. TV station CNYCentral, which broke the story, asked Derek Ford, a representative of the local ANSWER Coalition, to respond to the public outcry. Ford replied, “I think there's a feeling that the police operate above the law and above society and that they're sort of untouchable.”

The SPD and DA work hand in hand in covering up the criminal acts of cops, but, because there was video evidence that was being widely circulated they had to respond. Instead of justice, however, the community received calm assurances from Fitzpatrick that the criminal cop was a “very, very highly regarded officer,” and that this was just an “aberration.”

The DA told the public that the officer involved was given a strict punishment, offering no details. The city refused to release the officer’s name. This is a common practice in publicized police brutality cases, and it sends a signal to other cops that they will be protected from public scrutiny for their brutality and violence. Court papers identify the officer as Nicholas Stuper. The Syracuse community should beware of this violent cop.

Earlier in the same day of July 30, the police shot and killed Dominique Smith, a young Black man, on the city’s Southside.

The cops involved, Gordon Quonce and Henry Hilton, claim that Smith was “acting erratically” during a traffic stop. Smith was a passenger in the car. He ran from the police, who were questioning the driver outside.

Smith ran across the street into a parking lot. The police story is that Smith then turned towards the officers and pointed a gun, at which point Quonce shot and killed him.

The autopsy, however, revealed that Smith was shot in the back of the neck, with the bullet exiting his mouth. This clearly indicates that either Smith had his back toward the officers when they shot him, or Quonce’s gun was loaded with magic bullets.

Immediately, police chief Frank Fowler held a press conference at which he stated that a gun was found on Smith, and that it was believed to have been used in earlier shootings. This has been reiterated by the SPD several times, but no evidence or other specifics have been provided to support this claim. Fowler appears to be attempting to try Smith postmortem in the press by linking him to violent crimes and “gang activity.”

On Aug. 23, Fitzpatrick held a press conference announcing that a grand jury had cleared Quonce of any wrongdoing and that it was a justified shooting. However, the deck was stacked against the grand jury uncovering the truth, as Fitzpatrick had convened the grand jury, presented the relevant “evidence” and decided which witnesses to call to the stand.

The details of the grand jury hearing are, of course, a secret. It is unlikely that witnesses were called to testify on behalf of Smith, to tell the grand jury how highly regarded he was or how it would be “aberrant” for him to be in a possession of a gun. The victims of police violence are routinely silenced in the media and in court.

Working-class and poor people cannot rely on the “justice system” for justice. The courts under capitalism function to protect the interests of bankers and bosses and cover up the crimes of the police who serve them. Even though white-collar crimes cause more death and destruction than street crimes, they are almost never investigated or pursued by district attorneys. Bankers are never jailed for insider trading or bribery. Justice for the working class cannot be achieved under capitalism. To achieve true justice, we need a revolution.