Does the U.S. government have a strategy in Iraq and Syria? 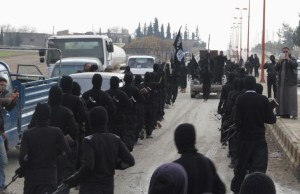 ISIS forces march in Syria near Turkish border, in January of this year

On Aug. 29, referring to the U.S. approach toward the Islamic State, President Obama said: “We don’t have a strategy yet.” Obama went on: “I think what I’ve seen in some of the news reports suggests that folks are getting a little further ahead of where we’re at than we currently are.”

The next day, British Prime Minister David Cameron also made comments on ISIS. Interestingly, Cameron brought up the real roots of the problem if only to dismiss them: “This threat cannot be solved simply by dealing with the perceived grievances over Western foreign policy, nor can it be dealt with by addressing poverty, dictatorship or instability in the region, as important as these things are.” Similar to Obama’s, Cameron’s comments revealed the lack of a cohesive strategy on the part of Western imperialist governments.

Obama should be taken at his word. He does not have a strategy. It is not just Obama. The U.S. foreign policy establishment has not developed a strategy. It is particularly challenging for them to develop a new strategy considering that U.S. strategy in Iraq and Syria has been an abysmal failure.

Of course, for the targeted countries, U.S. military interventions always have catastrophic consequences. Over a million Iraqi deaths as a result of the eight-year occupation of Iraq leaves little doubt about the depth of the tragedy.

But leaving aside the cost in Iraqi lives and U.S. troops, as do Washington strategists, U.S. strategy in the region has totally failed in reaching its goals. Imperialists strategize in hopes of achieving concrete goals. Iraq was supposed to be the first phase of “redrawing the map of the Middle East.” After overthrowing the independent, albeit inconsistent, state led by Saddam Hussein, the U.S. was hoping to turn Iraq into a stable client state; one that would be a proxy in regional conflicts, one that would give Iraq’s oil away to big oil, one that would provide exclusive investment opportunities to U.S. corporations and shut out Chinese and other competitors.

None of these goals have been accomplished in Iraq.

The occupation did not turn out to be the cake walk that the State Department and Pentagon strategists had hoped for. Resistance to the occupation was so strong that, three years into the occupation, illusions of an easy victory gave way to a desperate effort to avoid outright defeat. By promoting sectarian conflict, the U.S. and the British prevented Iraq’s unity against the occupation. But Washington ended up settling for an Iraqi state run by Shiite forces closely allied with Iran. Then, again to avoid outright defeat, the U.S. also ended up reaching a deal with many forces up to then fighting the occupation. Hence the Awakening Councils were put on the U.S. payroll and integrated into Iraq’s army.

To the chagrin of Washington, Iraq’s government signed many major contracts, including oil contracts, with China. The “coalition of the willing,” Iraq’s occupiers, did not get exclusive rights to Iraq’s markets and resources as they were hoping to.

In Syria, since the early days of anti-government protests in 2011, the United States developed a strategy of overthrowing the state. Of course, Washington had always wanted regime change in Syria, as in any other country with an independent state. But the protests and the emerging rebels made possible the development of a concrete strategy.  The plan was to organize those who had taken up arms against the state into the so-called Free Syrian Army. Then the U.S. would form a “respectable” coalition from Syrian academics and intellectuals in the Diaspora and call them the Syrian National Council. The Free Syrian Army would serve as the ground force of this “democratic” coalition. Once Assad was overthrown, political power would be handed to the SNC, which would have no choice but serve the interests of its benefactors in Washington.

But things did not go as planned. For one thing, despite U.S. efforts, the Syrian National Council, and the Syrian National Coalition that it morphed into, never really gained any legitimacy among the Syrian population. Especially damaging were statements coming from the Free Syrian Army that indicated a total lack of trust in the SNC.

The other problem was on the military front. With time, rebel groups not affiliated or allied with the FSA gained much more strength. Buoyed by recruits from all over the world, the jihadist forces proved to be better fighting forces, and much more capable of recruiting and replenishing their ranks.

Since the Jabhat al Nusrah (Al Qaeda affiliate in Syria), other Jihadist groups and ISIS were fighting against the Syrian state, the U.S. welcomed their existence. The U.S. had no problems with client states Jordan and Turkey providing the jihadist groups with free passage over the borders and training grounds. Nor did the U.S. have any problems with generous funding of the jihadists by arch-reactionary Gulf monarchies Saudi Arabia and Qatar. Once Assad was overthrown, U.S. strategists assumed, the “good” rebels, the FSA, would have the upper hand and the new “democratic” state, the SNC, would deal with the jihadists.

But this strategy has completely failed. Today, the FSA is a marginal player. At best, the FSA is the third strongest force among the rebels, after ISIS and the Nusrah. What territory the FSA hasn’t lost to the state, it has ceded to ISIS. The Syrian National Coalition is a joke. The only real fighting on the SNC’s record is against each other, as evident from leadership changes every few months. Hardly anyone outside of Washington considers the SNC a major player.

Obama’s Republican detractors have tried to score political points on his admission of lacking a strategy. But the fact is that, for the long-term interests of U.S. banks, oil giants and other corporations, there are no good strategic options. In Iraq, while the U.S. wants ISIS to be defeated, it does not want the central government of Haider al-Abadi to be significantly strengthened. Abadi is from the same exact party—Da’wa—as Maliki is and is nowhere near what Washington might consider its man.

The strengthening of the semi-autonomous Kurdish region in northern Iraq has its own set of problems for Washington. The Kurdish leadership has proven to be no threat for U.S. strategies otherwise, but Kurdish independence in Iraq would pose a serious threat to Turkey, a NATO member and client the U.S. has to rely on.

Today, ISIS controls approximately one-third the area of Iraq and one-third the area of Syria. Currently, there is no border between the two countries, with ISIS controlling both sides of what used to be the border. There is talk of the U.S. targeting ISIS within Syria. Of course, violating the territory of a sovereign nation has never been a problem for U.S. strategists. But how would the United States effectively target ISIS from the air? On Aug. 31, journalists Isabel Coles and Peter Apps reported that the Islamic State had adjusted its tactics to make its forces harder to target by U.S. and Iraqi aircraft. They are no longer mounting machine guns on the backs of pickup trucks. They are no longer prominently displaying their large black flags that would make them an easy target. They are consciously making an effort to blend in with the population of the areas they control.

In Syria, in the absence of coordination with Damascus, without information from the ground, how would the U.S. know exactly where to target? And with ISIS being by far the strongest rebel force in Syria, how would the U.S. bombing of ISIS not strengthen the position of Damascus, an independent state whose overthrow has been U.S. strategy for the last three years? How would the U.S. ensure that the FSA, now only a marginal force, can capitalize on the defeat of ISIS?

It is important to recognize that U.S. foreign policy is not determined by the ideas or personalities of this or that president, politician or general. Strategies are implemented in the conscious pursuit of the long-term interests of U.S. banks and corporations. They aim to crush socialist and workers states as well as nationalist and independent ones, secular or sectarian.

In this, U.S. foreign policy has been consistent for decades, through Republican and Democratic administrations alike. Failure to recognize this fact leads individuals and forces to fall for U.S. propaganda, believing that this time the U.S. might be on the right side. Recent examples of this are Libya and Syria, where many liberals took up the defense of the “revolution.”

It is equally important to recognize that U.S. strategy does not always generate the desired outcome for its planners. While U.S. strategists are clear about the goals they are pursuing, their strategies often fall short of reaching those goals. Whether it is Vietnam, Afghanistan or Iraq, it is obvious that U.S. strategy at times suffers catastrophic defeats. Failure to recognize this fact prompts some to think that everything that occurs is based on a blueprint, a master plan, that the U.S. has had in place.

Along this line, some have incorrectly suggested that the rise of ISIS is in accordance with a U.S. plan.

From the perspective of the U.S. foreign establishment, the rise of ISIS is an unintended consequence of its failed strategies in Iraq and Syria. It is not their desired outcome. Not only does the strength of ISIS serve no useful purpose for Washington, it causes a litany of problems that put Washington in a precarious position.

The false premise that everything that occurs is in accordance to a secret U.S. plan is a disempowering, disabling, demoralizing assumption. It leaves no room for the role of struggle in determining the future. It discourages workers and oppressed peoples from fighting. What’s the point of fighting if everything will go exactly as planned by the imperialist ruling class? And, above all, the premise that all is going as Washington planned does not conform to reality.

Will the Obama administration expand its military intervention in the Middle East? That is a real danger as the U.S. has already been bombing ISIS on a daily basis. Progressives and anti-war activists should take every opportunity to protest further U.S. bombings in the region. The crimes that ISIS has committed, and they have committed plenty, pale in comparison to the crimes of the U.S. in Iraq through 13 years of sanctions and eight years of occupation.

The ultimate solution is for the Iraqi people to regroup and reunify, re-establish their independent state and overcome the danger of ISIS and another U.S. military intervention. This will not be easy given the legacy of the U.S. occupation, but it is the only path forward for the independence of Iraq. Objectively, the U.S. military has killed many more Iraqis than ISIS ever will. The butcher of the Iraqi people, the U.S. government, cannot now become their savior.