Dream Defenders fight back against racism 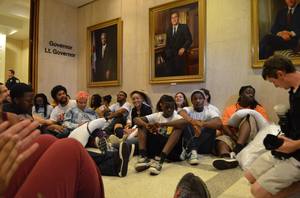 Submitted by Bryan Ellis, an FSU student and ANSWER Tallahassee member who has been active in supporting the sit-in. After the writing of this report the Dream Defenders announced the escalation of their campaign against racial profiling and decided to end the sit-in to focus on state-wide organizing. Dream Defenders executive director Phillip Agnew said in a press conference Aug. 16, "Our work and our power have grown too big for these halls… It's time for the movement to continue."

For the last month, the Dream Defenders, a human rights organization directed by Black and Brown youth, has used Florida Gov. Rick Scott's office in the Capitol as an organizing center for real people's power. The sit-in began July 16, three days after George Zimmerman's acquittal in the racist murder of Trayvon Martin. It was initially called "Takeover Tuesday" but has since expanded into just "The Takeover." Several high profile entertainers and civil rights activists, such as Rev. Jesse Jackson, Harry Belafonte, Talib Kweli and Julian Bond, have paid it a visit. Activists show no sign of leaving and continue to attract national media attention.

When the governor met with Dream Defenders to discuss these demands, he refused to call a special session. Organizers rejected his callous suggestion that "praying" was their best option and vowed to stay encamped in the Capitol. They came closer to their goal this week when enough legislators filed written certificates with the Department of State to trigger a poll that could lead to a special session.

The Takeover has displayed incredible creativity, endurance and militancy. Many organizers have lived at the Capitol for a month, only rarely leaving for a shower or good night's sleep on a couch or bed. Meanwhile, Florida Department of Law Enforcement does what it can to hassle them, turning the air conditioning off after hours, keeping the lights on at night to disturb their sleep and preventing food and supplies from entering when possible.

Still, the Dream Defenders and their allies wake up each morning and begin the long day of workshops, strategy discussions, media events and rallies. Icebreaking activities, singing, chanting, dancing and imaginative games of all kinds have kept spirits high and solidarity deep.

Many of the workshops and "People's Sessions" (mock congressional hearings held by activists) take place in the plush reception room of the Florida executive branch. A path through the room is taped across the green carpet to allow lobbyists and politicians into the governor's off-limits chambers. Sitting in a circle on the expensive, palm-tree printed furniture and on the floor, activists talk strategy and share personal stories about militarized schools, racism and the prison-industrial complex.