Drop all charges against the CUNY 6! 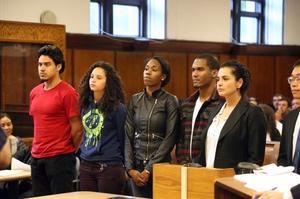 Four of the CUNY 6 in court

On Sept. 16, the New York Police Department violently arrested six student protesters outside of a fundraiser attended by David Petraeus, former general and CIA Director who presided over the Iraq and Afghanistan occupations, as well as the CIA's secret drone wars. The loud, peaceful protest was obstructed by police barricades and forced into the streets before being attacked. Several students were punched, thrown face-first into the pavement during the arrests.

A group of supporters immediately went to the 20th Precinct where the students were being held, remaining for hours outside in solidarity and showing the police that the protesters were not alone. Supporters were there again when the students were arraigned in court nearly 24 hours later on a range of false charges.

There is now a determined campaign from students, faculty and other antiwar activists to have the charges dropped against the "CUNY 6." The ANSWER Coalition joins in and encourages all its supporters to show solidarity with these efforts.

Despite his record as a war criminal, Petraeus has been hired as a Visiting Professor at the City University of New York's Macaulay Honors College. In response, students, faculty and anti-war activists formed the Ad Hoc Committee Against the Militarization of CUNY. The committee is demanding that CUNY, a historically working class public institution, fire Petraeus because of his war crimes. They note that his presence is part of a larger effort to build sympathy for U.S. militarism among the student body.

Drop all charges on the CUNY 6! Fire Petraeus and arrest him for war crimes!