The U.S. says it wants to help us but maintains an unjust blockade' 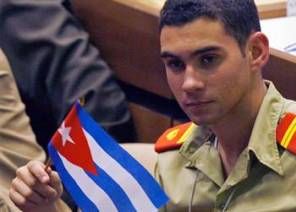 He was seen sharing with everyone, having his picture taken, laughing, telling stories undisturbed by the media siege, in parades, in presentations, debates; just as any other Cuban, one among the 300 that represented the country at the 18th World Festival of Youth and Students.

Elián González Brotons attended the festival. He was the child whose return to Cuba, over 13 years ago, opened an unprecedented chapter in the history of the struggle of the Cuban people who took to the streets to get him returned to his father and homeland.

During those days of celebration and discussion, El Telégrafo, the dean of the Ecuadorian newspapers, interviewed him. JR shares the interview with its readers.

It is a dialogue that brings us closer to this 20-year-old who is humble, private, with a down-to-earth way of thinking and acting, and is always very sensitive about Cuba.

Last Tuesday, during the funeral of Nelson Mandela in South Africa, the presidents of the United States, Barack Obama, and of Cuba, Raul Castro, shook hands. Would you comment on that?

“I do not know what his intentions were (of Obama); if it was just some double standard or plain protocol. I wish that handshake would change history. This is Obama's last term and why not be the president who changed history, who lifted the blockade against Cuba, who ended wars, who freed the Five Heroes [Cubans imprisoned in the U.S.] thus living up to his Nobel Peace Prize.”

“Of course we wish that handshake had been real, a friendly gesture, a gesture of solidarity with the Cuban people on the basis of mutual respect and for our sovereignty."

This is your first trip outside Cuba since you returned. Why did it take you so long?

“Yes, this is my first trip because we know that imperialism makes every effort to damage the integrity of the Revolution, to hurt our people and make us suffer. There was also fear of retaliation, fear of actions against me, so I had not been allowed to travel abroad and also I was very young. Now that I'm older and I was coming to a brotherly country, we felt certain that nothing would happen in Ecuador. It was time for me to go out and tell the world how I feel, what my thoughts are and my support for the Cuban Revolution, for Fidel and for the progressive movements that are emerging.”

Since this the first time you are outside Cuba, how do you feel surrounded by all this media attention? How is the situation in your country?

“In Cuba I'm not overwhelmed as much; overwhelmed in the sense that they let me live as an ordinary young guy. What happens is that in Cuba everyone wants to meet me, make friends, because I became part of their lives.”

"Here too, the people of Ecuador have been very warm and supportive. I had no idea how big the struggle had been, but here I have realized that people around the world joined in the struggle for returning me to my father. I thought my story was not well-known, but it is. It's something the Americans gave me, they made me famous and sometimes, I'd like to go unnoticed. But it is also my obligation and duty to be nice to anyone who comes to see me, to treat them kindly and to assist them in any way I can, because the international community took up this struggle and supported me."

How is your life in Cuba? You are studying Industrial Engineering, in Matanzas where you live. Why did you choose this profession?

"I am just an ordinary young guy; I go to school in the morning, I attend classes, I go to parties, listen to music, I practice sports, I go out with my family. My life is very normal. I chose this profession because in Cuba a restructuring of the economy is being carried out following the Guidelines of the Party. Although we are blockaded, we try to push development forward. That is precisely what this profession is about: managerial techniques in order to make processes more effective, more efficient and to achieve better results with the smallest possible amount of resources. Also you learn to manage quality and human resources."

"I thought it was the most suitable profession to respond to what the Revolution needs, to what our country needs today: a change in our economic policy to continue improving our economic model. I'm two years away from graduating; it is a five-year program."

How do you view the reforms that are being implemented in Cuba?

“These were necessary reforms. Changes have been introduced to restructure our economy, in order to make it more productive. New openings are in place; the number of self-employed people is growing, the number of agricultural cooperatives is growing. All this has been done to promote the development of the economy in Cuba.”

"There have also been changes in immigration policy and other sectors. They are very positive changes that have been well-received by the people, because they are aimed at improving our situation. The road ahead is hard; it is difficult to sustain an economy being such a small country, a country without great resources except for the most valuable one: our human resources.”

"Although we are blockaded, we always come out ahead. These policies are aimed at solving problems of the population. The United States says it wants to help the Cuban people, but it maintains an unjust blockade, a series of laws only to harass us and cause economic problems."

How did you get involved in politics? Do you see yourself replacing any of the leaders of your country?

“If that comes to pass, I would undertake it with great pride. But that is not what I want. I do not want any leadership job or anything like that.  I want my life to be as quiet as possible, but if that is what is needed of me, I’d be willing to do it.”

“Young Cubans have always been ready: just as Fidel and Raúl, when young, were able to see on which side their duty was, not where life could be better. ... I am now a member of the Young Communist League."

Many Cubans live in the United States. You could have stayed there, but did the opposite. You returned to Cuba. Are you aware of what this means?

“I believe I'm a positive symbol. I've had the opportunity to talk with Cubans who live in Miami and who admire me; they believe I made the right decision. They went to Miami because of the economic problems caused by the blockade. If the United States passed a law so that all Ecuadorians who step on U.S. soil could stay, and after a year were given citizenship, just imagine how many Ecuadorians would go. As Martí said, 'I saw the monster and know its entrails.' U.S. soil is no better than the Ecuadorian soil; here a Citizen Revolution is taking place for the benefit of the people.”

We recall the image of the child crying, under pressure, and who had lost his mother in an attempt to reach the United States. How do you remember her?

"I think she was somehow manipulated by her partner of the time; he was a criminal, a low-life. I remember he even abused her."

"I do not have a very clear view of the circumstances, I was very small. But maybe she was forced by him. I remember her as a good mother who gave me the love I needed. About her wish to go to the U.S., I'm sure she never had anything against the Cuban Revolution or the leadership of the people; her wish was to improve her economic situation which was a result of the blockade and the unfair laws imposed on us.”

"But greater than the suffering I could have experienced is that of the children of the Five Heroes. My thing was over in just one year, they have been 15 in this battle."