The ANSWER Coalition encourages its supporters to attend the follow emergency demonstration. Below are detailed from the Corean Alliance for Independent Reunification and Democracy. 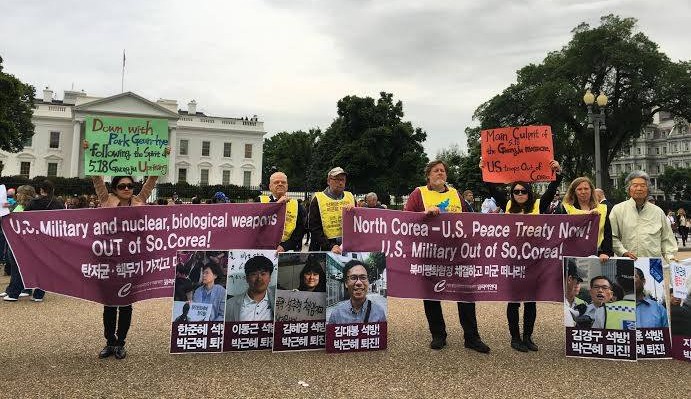 On May 26, the appeals trial of three activists including a representative of Corean Alliance for Independent Reunification and Democracy were sentenced to two years in prison. Among them is Kim Hye-young, prisoner of conscience, who had surgery for total thyroidectomy twice and still is suffering from cancer.

Last year on July 26, Kim Hye-young was arrested by Seoul police for violating the National Security Law and was brutally interrogated by a unit notorious for political repression. She resisted them by fasting for 10 days. This has complicated her health conditions.

Many domestic and foreign organizations including Amnesty International in East Asia have continued to demand the release her. But the Park Geun-hye government and Seoul Detention Center where she has been imprisoned disregarded this demand and even refused bail.

Kim Hye-young decided to indefinitely fast in prison since the May 26.

She is fasting unto death, in poor health to begin with, in a tiny, crowded and hot cell.
International Solidarity Political Prisoners Korea
Do you like this post?
Tweet
Donate to the Movement Volunteer - Get Involved Today