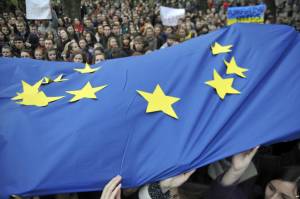 Waving the flag for EU integration at Dec. 4 demonstration in Ukraine

On March 5, the European Union offered a $15 billion loan package to bailout the Ukraine. The conditions of this loan have not been made public.

Since the issue of whether Ukraine should join the EU and borrow money from the EU and International Monetary Fund or from Russia is central to the crisis in Ukraine, it is helpful to go back a few months and go over what happened at the beginning of the crisis.

On Nov. 21, the elected president of Ukraine, Viktor Yanukovych, decided not to sign an association agreement with the EU. The same day, Prime Minister Mykola Azarov rejected an IMF loan that was one of the conditions of association with the EU.

That night, a protest movement started that demanded integration with Europe. According to the New York Times, “On Friday evening (Nov. 22), about 1,000 people protested in the rain in Independence Square waving European Union flags and chanting, “Ukraine is Europe!”   Azarov rejected the onerous conditions of the IMF loan: “raise of gas and heating tariffs for the population by approximately 40%; commitment to freeze base salary, minimal salary, general nominal salary on the current level; significant shortening of expenses for budget purposes; reducing of subsidies in energy sector; gradual cessation of the Value Added Tax exemption for agriculture and other branches and other conditions.”

The IMF loan was less than a $1 billion over seven years. Ukraine's debt is approximately $4 billion.

Ukrainians pay 20 percent of their gas bill, while the government pays the rest. The VAT tax exemption, which the IMF also wanted to undo, protects Ukrainian farms and businesses from powerful global competitors. The IMF canceled a prior loan to Ukraine because the Yanukovych government had raised the minimum wage.

In other words, for an insufficient loan the IMF was demanding conditions that would greatly harm workers and small farmers, while establishing the Ukraine as a virtual free trade zone that would inevitably lead to the selling off of industries and resources to the West. It is important to note that up until this point, Yanukovych and Azarov had been in favor of the Ukraine joining the EU.

On Dec. 17, Yanukovych signed an agreement with Russia for $15 billion in loans over five years. Russia also agreed to reduce natural gas prices to the country by 33 percent. Furthermore, Russia did not require Ukraine to change any of its laws or join the Customs Union of Belarus, Kazakhstan, and Russia in order to receive the loan. Vitali Klitschko, an opposition leader in the Ukraine, said about the deal with Russia: “They have given up Ukraine’s national interests, they have given up Ukraine’s independence, and they have given up perspectives of better life for all Ukrainians.”

But the IMF loan would be a far worse deal for the sovereignty and well-being of “all” Ukrainians.

European Union leaders, who greeted mass protest against austerity across Europe with utter disdain, were not only supportive of the protest movement in the Ukraine. They literally joined the protests.

They joined significant far-right and fascist forces, who have long maintained a social base in parts of western Ukraine. Meanwhile, a vocal sector of well-educated Ukrainians in the cities of the West of the country, who have traditionally leaned to the West, believe that integration with the West would lead to an improved standard of living. This is an illusion for the vast majority of Ukrainians.

What membership in the EU would mean to the Ukrainian masses

We only have to look at Poland, which is often put forward as an EU success story, to find clues about what would happen to Ukrainian workers under the umbrella of the EU.

Because Poland's Gross Domestic Product grew in the years following the 2008 recession, the capitalist press dubbed the country's growth, which has since slowed, as the “Polish Miracle.”

How did this “miracle” happen? What has the “miracle” meant for Polish workers?

The GDP of Poland has grown as a direct result of German investment and EU aid, while the situation for working people has not improved. In fact, the basic condition of this investment is the guarantee of cheap labor costs. When the recession hit, German capital simply went across the border where wages are lower.

The unemployment rate in Poland is 14 percent. One in 19 Poles are forced to leave the country to look for work—work that for the vast majority of emigrants is beneath their level of education and experience.

A staggering 35 percent of children in Poland now live in poverty.

On top of all this, in order to join the EU in 2004, Poland enacted drastic market reforms that greatly eviscerated the social safety net.

In other words, the EU, with the help of the IMF, has overseen the creation of Poland as a source of cheap labor for Germany and other European powers. Poland's wealth has grown, but it has been diverted from the Polish masses to the German capitalist class.

Every former socialist bloc country that has entered the EU has become a source of cheap labor and resources for the world's powerful capitalists. Whole industries have been captured and are now owned by people headquartered in foreign capitols.

For the United States and Europe, Ukraine is a big prize with large agricultural, industrial and technological sectors that, if brought into their orbit under their terms, could be exploited to enrich a tiny handful of people who live in the centers of power in the West. It also strengthens Europe in relation to Russia, a major competitor to the West who is not in the club of the Western imperialists.

The goal of the EU and the IMF is not to protect Ukrainian sovereignty, but to shape Ukraine into yet another source of super profits. While the corporate press presents the EU and the IMF as the saviors of Ukraine, these institutions have driven countries like Greece into the ground while sheltering German and U.S. capitalists from the effects of the great recession.

The other thing that the EU and IMF offer to the Ukrainian working class is a future of austerity and neocolonial domination.