Events in solidarity with the Ayotzinapa 43

The movement in solidarity with the 43 dissappeared Ayotzinapa students is gaining momentum in the United States. Below are reports from recent events in Washington, D.C., San Francisco and Chicago.

Washington, D.C.: “The revolution has begun” - Resisting state terrorism from Ferguson to Ayotzinapa 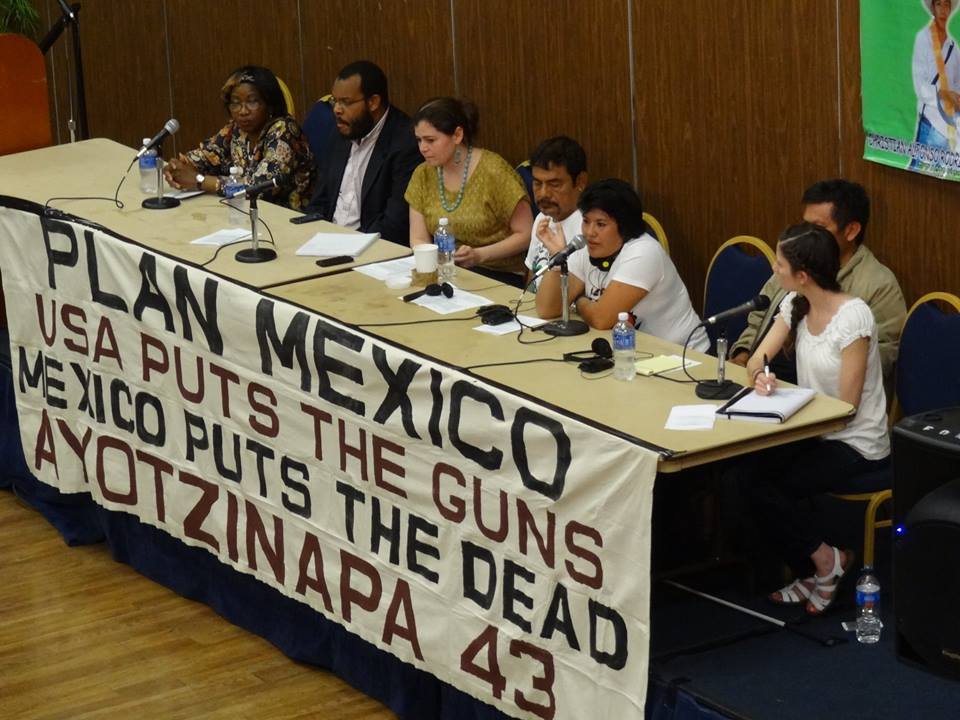 Last night, a crowd of about 250 people gathered at Howard University’s Blackburn Center to hear activists from Caravana 43, SOA Watch, #Ayotzi43DC and DCFerguson. In a show of unity against racist violence and imperialism, the event covered the respective movements in the two countries—the Black Lives Matter Movement and the movement for the Ayotzinapa 43—and their related histories.

Moderated by Sandra Macias of Ayotzi43DC, the event began with a discussion of the racist regime of police terror in the United States, with Eugene Puryear representing DCFerguson and discussing the origins of the modern Prison-Industrial complex and the roots of today’s vicious police violence directed against Black and Brown America. Comfort Oludipe—mother of Emmanuel Okutuga, who was killed by Montgomery County police—followed describing the sharply racist character of police violence in the United States and the organizing work she has done following her son’s murder. Maria Luisa Rosal of SOA Watch then related the development of police violence and mass incarceration to the broader global context of capitalism and imperialism, particularly with regard to U.S. intervention in Latin America.

The remainder of the panel focused on the activists from Ayotzinapa, who have heroically stood up to longstanding violence and oppression at the hands of a state torn between drug lords and the U.S. energy, manufacturing, agriculture and financial industries. Anayeli Guerrero de la Cruz, whose brother was kidnapped by Mexican police, gave background information on the conflict in Ayoztinapa out of which the kidnapping of the 43 students was borne. She described gripping poverty and underdevelopment facing the region, which led Clemente Rodriguez Moreno’s son to attend the Rural Teacher’s College, from which he was abducted on September 26-27, 2014. Rodriguez picked up where Guerrero left off, who said his son had begun attending the school so that he could return to his hometown to educate the youth about their history and culture. Felipe De La Cruz Sandoval, spokesperson of the parents and family members of the Ayotzinapa 43, gave the last presentation that night by giving a broader international overview, condemning U.S. meddling through Plan Merida for escalating the war on drugs and producing a general climate of militarized violence in Mexico. His son escaped the attack on the night when the Ayotzinapa 43 were kidnapped. Sandoval concluded, “the revolution has begun,” referencing the mass mobilization taking place in Mexico to stand up for independence from imperialism and freedom from violence by the Mexican government and drug cartels.

After a period of discussion, Guerrero read a list of names of the 43 students, following each with “Presente!” to express a sentiment shared by her, Sandoval, and Rodriguez that 43 are still alive and that they will continue to struggle until the Ayotzinapa 43 are free. 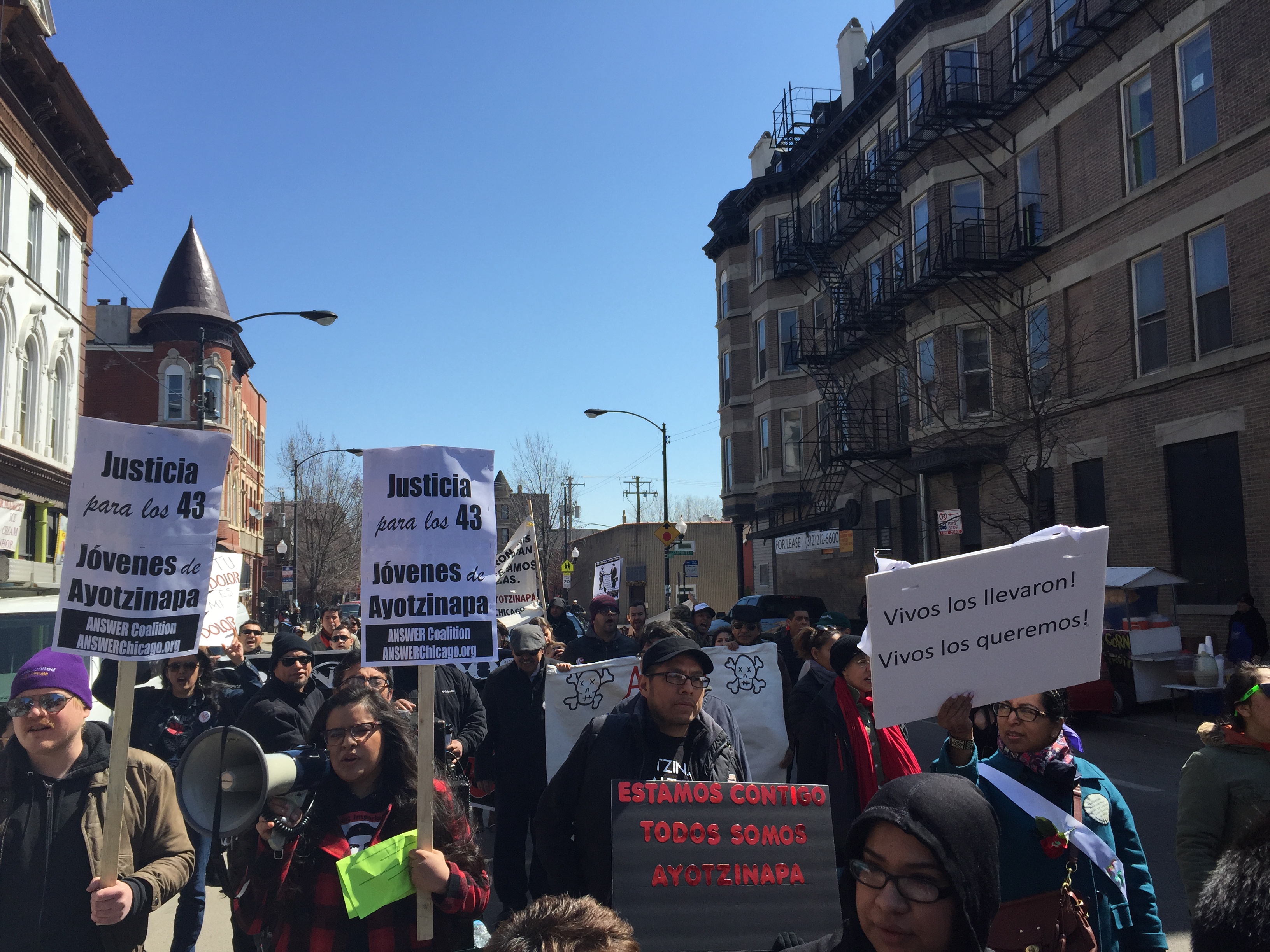 The march started with a short program from the members of the caravan sharing a brief part of their stories. The march went throughout the Pilsen neighborhood, bringing members and organizations of the community into the streets as well. The march was diverse and brought people of all ages out to demand justice and show solidarity for the families of the missing 43.

Protestors chanted “Porquè? Porquè? Porquè los asesinan? Si son la esperanza de America Latina!” as we marched through the streets. The protest had a short stop in Juarez High School’s field, in which community members spoke out against the violence that the student movement in Mexico has faced.

There was a strong connection with the police violence here in Chicago and across the U.S. Gloria Pinex, whose son Darius Pinex was murdered by CPD in 2011, spoke about how her and her family are still fighting for justice and to show solidarity with the families of the missing students. In response, the families of the 43 students and the crowd raised their hands and chanted, “Hands up, don’t shoot!”

After the brief speak out the march continued to a church where the members of the caravan and allies were scheduled to speak in depth about the struggle that is continuing in Mexico. Justicia para los 43 Jòvenes de Aytzinapa!

Both reports were reposted from Liberation News

Click here to view a video of the action in San Francisco, Calif.