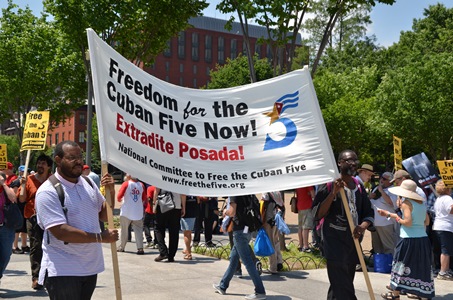 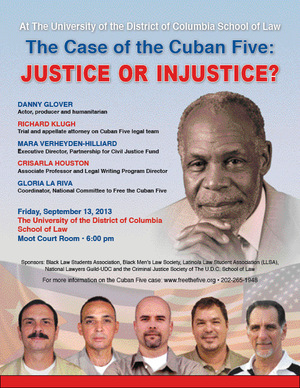 September 12 marks the 15-year anniversary of the outrageous and unjust arrest of the Cuban Five. The Five were falsely accused of committing espionage conspiracy against the United States, and other related charges. They never harmed anyone nor ever possessed nor used any weapons on their mission. Their objective was simply protecting people from anti-Cuba terrorist groups that are given safe haven by the U.S. government. To demand their immediate relese, many events around the country will be held around the anniversary. The ANSWER Coalition encourages all our supporters to attend and get involved in the ongoing struggle to free the Cuban Five.

Join the International Committee for the Freedom of the Cuban Five and many others at the White House for a vigil demanding that President Obama immediately release Gerardo, Ramón, Antonio and Fernando. The ANSWER Coalition has endorsed this protest and will be mobilizing its supporters.

Enough is enough!
End the injustice!
No more impunity!
Free the Cuban 5 Now!

An important forum will be held at UDC featuring:

Stephen Kimber's new book: "What Lies Across the Water- The Real Story of The Cuban Five" to begin U.S. Tour

As part of the international call to actions to commemorate the 15th anniversary of the unjust imprisonment of the Cuban 5, the International Committee for the Freedom of the Cuban 5 is organizing an East Coast tour with Canadian author Stephen Kimber who will be presenting his newly released book "What Lies Across the Water-The Real Story of The Cuban Five." The book is the result of an exhaustive research effort, including the author's review of more than 20,000 pages of court records of the longest case in U.S. history, that he presents in a clear and objective narrative. Kimber's style is riveting from the first page to the last as he leads the reader through the twists and turns of their mission leading up to the arrest of the Cuban 5. The book shows how embedded the case is in U.S. - Cuba relations while being so hidden from the U.S. public. Stephen Kimber is a professor of journalism at the University of King's College in Halifax and an award-winning writer, editor and broadcaster.

From September 11-17 Kimber will speak to U.S. audiences in Washington DC, Maryland, New York (Manhattan and Brooklyn) and in Boston where American linguist, philosopher, and political scientist Noam Chomsky will be speaking with Kimber about the Cuban 5.  A second tour is being planned to take place on the West Coast in early November.

"What Lies Across the Water" represents a new and important tool in explaining the Cuban 5, especially to those who know nothing about the case. Although activists familiar with the case of the Cuban 5 will find new information, the tour is aimed at reaching new audiences who will be moved to end this long injustice.

Sunday September 15
Time 5:00 pm
Place: Center for Cuban Studies
Cuban Art Space
Address: 231 West 29 St
New York City
Book presentation and Opening Exhibit "I will die the way I lived" of paintings by Antonio Guerrero, one of the Cuban 5. The exhibit includes 15 watercolors to mark the 15th anniversary of the imprisonment of the Cuban 5.