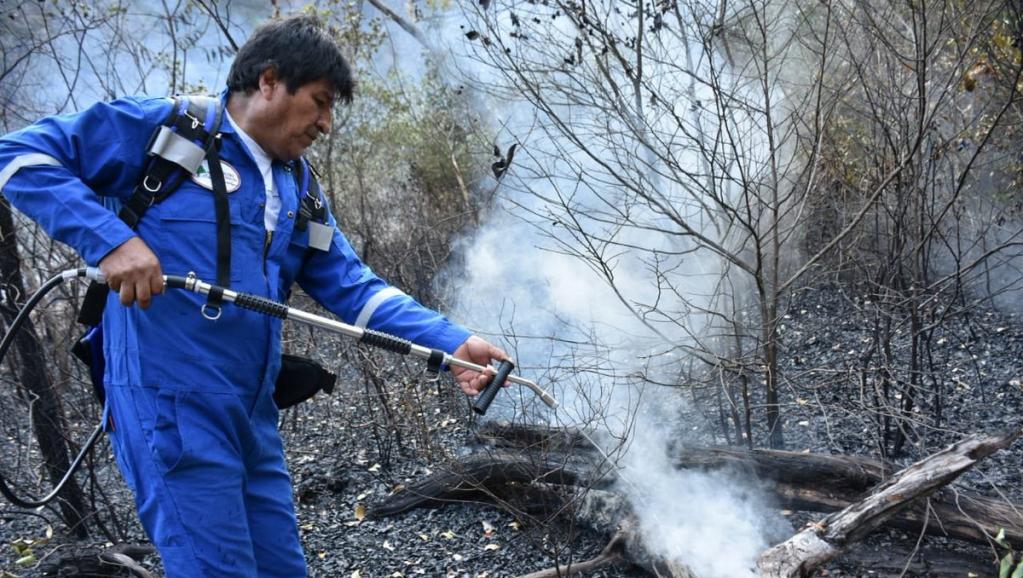 While other South American leaders stood idly by, and delayed operations to fight fires days after the flames began to spread across the Brazilian Amazon, the President of the Plurinational State of Bolivia, Evo Morales Ayma, personally led efforts to confront the tragedy in the area of Chiquitanía, located in the country’s southeast, between Gran Chaco and Amazonía.

In a Twitter message, Cuban Foreign Minister Bruno Rodríguez Parrilla emphasized the Bolivian leader’s actions in the face of an environmental disaster, writing, “We recognize the leadership of President Evo and the brothers in Bolivia, who are confronting fires in their area of the Amazon. They can count on our solidarity and support…”

The indigenous President has adopted significant measures to protect Mother Earth from the flames that have affected more than 700,000 hectares in Bolivia. First was the key step of creating an Environmental Emergency Cabinet in Roboré, in the department of Santa Cruz, charged with evaluating the situation, facilitating help, and attending to the most urgent needs of the population and nature impacted by the fires, according to the country’s Ministry of Communications.

Official Bolivian reports indicate that working in the area are 1,800 soldiers, 450 police, 21 ambulances and 42 water trucks with their crews, as well as a large number of doctors and volunteers, for a total of more than 4,000 persons. This coordinated response has contributed to preventing any loss of human life, to date.

Some 2,000 residents and firefighters have been provided medical assistance, although no severe cases have been reported, according to statements by the country’s Health Minister, Gabriela Montaño.

Also deployed were veterinary personnel to aid domestic and wild animals, and refuge centers were created for the area’s fauna. A report on RT indicated that seven aircraft are fighting the fires, among these a Boeing 747 Super Tanker leased by the Morales government.

Of course, criticism from the opposition was not long in coming, but quickly lost steam given the preliminary results of measures taken by the President, who tweeted, “I thank the press for visiting Chiquitanía to verify the struggle underway against the fires. Together we confirmed a reduction in the number of hotspots over the last few days, from 8,000 to 162.”

Morales has provided a personal example of the attitude required to overcome a natural disaster: cooperating with the firefighting brigades; coordinating the Emergency Cabinet’s work; inspecting affected areas from the air; holding meetings with residents; and temporarily suspending his campaign as the Movement to Socialism (MAS) candidate for President in the upcoming October elections, given the difficult situation in Chiquitanía. He has additionally declared an “ecological pause” in affected areas, which includes a prohibition on land sales, and accepted international aid, which is still insufficient.

No less important is his call for a meeting, to address the fire emergency, of foreign ministers from the Amazon Treaty Cooperation Organization’s (OTCA) member countries, which includes Bolivia, Brazil, Colombia, Ecuador, Guyana, Peru, Suriname and Venezuela.

The Bolivian government, and its President in particular, have promoted the hashtag #UnidadEnLaAdversidad (UnityInAdversity), sharing news on the fires via social media. A good maxim for a sister people confronting a great challenge – a difficult task that requires the best from human beings, and especially unity to fight the flames and begin the recovery.

The Amazon’s importance for the world

– The Amazon River is the largest in the world, carrying an average of 230,000 cubic meters of water per second, 20% of the fresh water on the planet.

– Indigenous groups, with great cultural and linguistic riches, account for 17% of the population in the region. These native peoples have always used the rainforest’s resources in a sustainable manner thanks to their knowledge of its biodiversity and ecosystem.

– Amazonia is a region of great geopolitical importance both nationally and internationally, given the scarce, strategic resources it holds, its environmental importance, and cultural patrimony.