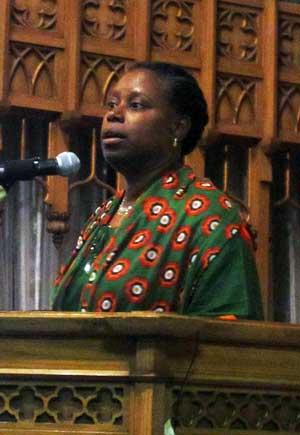 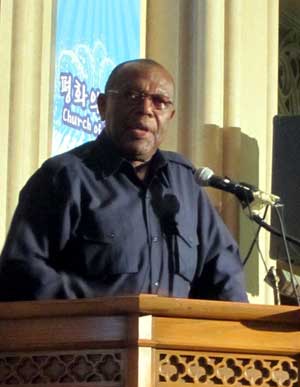 On Saturday, June 18, a vibrant, multinational crowd of over 200 people packed into the Los Angeles meeting of the “Eyewitness Libya” national speaking tour, featuring former congresswoman and presidential candidate, Cynthia McKinney. McKinney returned to the United States from Libya only hours before the event began.

ANSWER Coalition organizer Peta Lindsay emceed and opened the event: “ANSWER is proud to be hosting this speaking tour in many cities around the country. We are committed to organizing, spreading the word and taking to the streets to fight back against U.S./NATO intervention in Libya, as long as the bombing continues and until the right to self-determination for the people of Libya is upheld.”

In a rousing speech, Akbar Muhammad of the Nation of Islam highlighted the destructive nature of the U.S./NATO mission targeting Libya. He spoke of the need to unite the African continent and pointed out that the war on Libya is doing the opposite. Muhammad said: “The dollars going to this war come directly out of our communities. And, as the polls now show, the reality is that most people in the United States do not want war with Libya.”

Radio host Dedon Kamathi spoke about his eyewitness experiences in Libya and urged solidarity with the people struggling to survive as NATO bombs drop around them each day.

Iraq war veteran Mike Prysner discussed the false “humanitarian” motives behind the war on Libya and what U.S. activists can do to stop it. Prysner said: “We must explain to our friends, neighbors, co-workers, that this war, which we never had any say in starting, is being waged with our money, with the great wealth that could be used for our jobs, our communities, our schools. We must use their blatant hypocrisy to expose the U.S. government and build a movement that will stop this war machine in its tracks once and for all.”

Keynote speaker Cynthia McKinney opened powerfully, recounting why she became an activist: “My father always talked with me about people who lived their lives without purpose. I didn’t want to be one of those people. I wanted to tell the truth and be on the side of the people demanding justice.”

Receiving several standing ovations as she spoke, McKinney discussed what she saw in her two recent delegations to Libya in great detail. She recounted meeting with teachers, students and university professors. McKinney also spoke about hearing dozens of NATO bombs falling around Tripoli, Libya’s capital, each day. “As the bombs fell, each time buildings shook violently. Tripoli is under heavy aerial bombardment in all areas, in civilian areas,” she said.

McKinney presented a new video with analysis and first-hand footage from Libya taken during the NATO bombing.

A lively question and answer session followed with more questions about what McKinney witnessed in Libya and whether she would return. To the latter question, McKinney said: “Yes, I will try to return after this tour. The truth needs to be told.”

The Los Angeles event was a major success and a step toward building more support for the struggle to stop the war on Libya. Each speaker at the event expressed their thanks to ANSWER for its steadfast anti-war work and for organizing the tour.

The national tour includes upcoming stops in San Francisco, Chicago, Washington, D.C., New York City and Syracuse, N.Y. McKinney will speak at all the events, and Akbar Muhammad will continue on the tour. Other featured speakers include former U.S. Attorney General Ramsey Clark and Brian Becker, National Coordinator of the ANSWER Coalition.