Factsheet: Who is the real threat to peace? 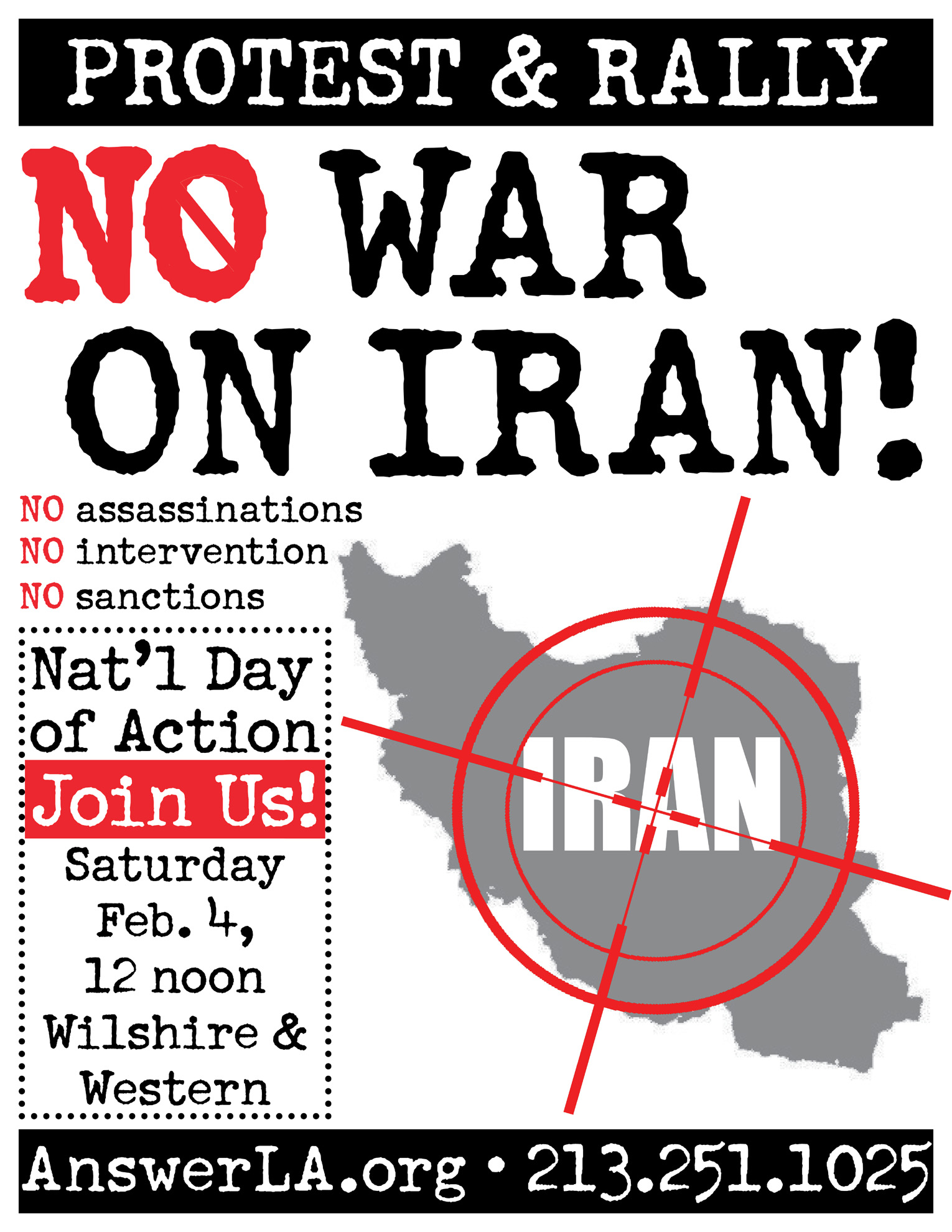 The ANSWER Coalition is calling on everyone to join a demonstration or to organize one on the National Day of Action on Saturday, February 4, to demand: “No War on Iran, No Sanctions, No Intervention, No Assassinations.” The call is sponsored by scores of progressive organizations.

Below is an instructive fact sheet developed by the ANSWER Coalition that breaks down the propaganda campaign against Iran carried out by Washington and the corporate media. Please share this with friends, family and co-workers via email and social networking sites.

Fact: Iran does not possess a nuclear weapon.

Fact: Iran has the right, according to international law, to develop nuclear energy for civilian use.

Fact: The United States is the only country to have ever used nuclear weapons. It did so when it incinerated hundreds of thousands of Japanese people living in the cities of Nagasaki and Hiroshima. Neither city had any military significance.

Fact: The United States has spent $7 trillion on nuclear weapons. The U.S. military budget for 2012 alone is about equal to Iran’s entire Gross National Product.

Fact: Israel, the largest recipient of U.S. foreign aid (about $3 billion in 2011), unlike Iran, possesses hundreds of nuclear weapons.

Fact: Israel, unlike Iran, refuses to sign the Nuclear Non-Proliferation Treaty, or allow the International Atomic Energy Agency (IAEA) into Israel to monitor its nuclear program.

Fact: There is active discussion in the Israeli media about whether Israel will carry out military strikes against Iran’s nuclear energy facilities. Israel bombed similar nuclear civilian energy facilities in Iraq in 1981 (“Operation Babylon”) and in Syria in 2007 (“Operation Orchard”).

Fact: The United States and Britain used severe economic sanctions and CIA covert operatives to overthrow the democratically elected government of Iran led by Dr. Mohammad Mosaddegh in 1953. The Iranian government under Mosaddegh had nationalized the Anglo-Iranian Oil Company (AIOC), which became known as British Petroleum (BP), in a campaign to use oil profits to eradicate widespread poverty within Iran. The successful CIA and British Intelligence coup d’état put the Shah of Iran (King) back in power. The Shah’s dictatorship denationalized Iranian oil and returned it to the ownership of British and U.S. oil companies. The Shah executed and tortured thousands during his 26-year bloody reign, which ended in the 1979 revolution that created the Islamic Republic of Iran.

Fact: The United States broke diplomatic relations with Iran and has pursued a policy of economic sanctions against the country since the overthrow of the U.S.-backed Shah (King).

Fact: The new economic sanctions against Iran include a ban on the import, sale and trade of Iranian oil, which constitutes half of Iran’s Gross National Product. It forbids any company in the world that does any business with Iran or its Central Bank from having any trade or economic transaction with a U.S. bank or corporation.

Fact: The economic sanctions are an effort to create economic suffering in Iran and to deprive the country of the goods and services to sustain life. According to international law, these economic sanctions constitute a blockade or an act of war against Iran even though Iran poses no threat to the people of the United States or Europe.

The ANSWER Coalition is organizing or supporting several of the Feb. 4 demonstrations taking place across the country in opposition to the new threats against Iran. Please make an urgently needed donation now to support this critical work.

See a list of endorsers of the Feb. 4 National Day of Action.