Feb. 5th- International Day of Mobilization in Solidarity with the Egyptian and Tunisian Revolutions 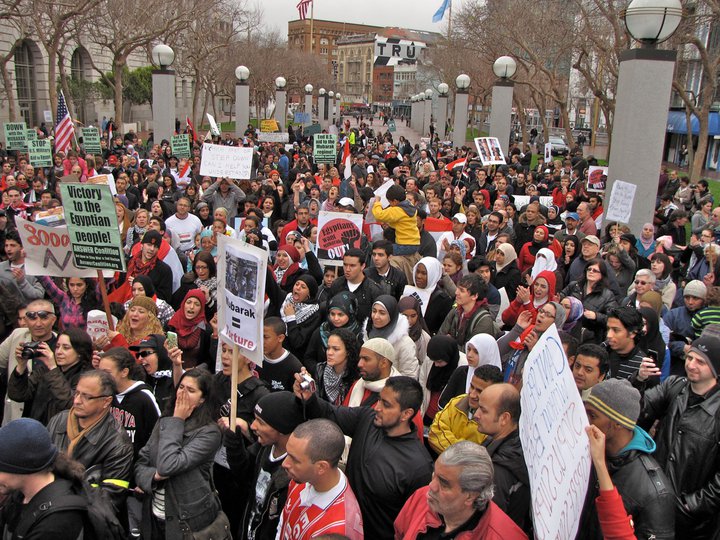 The ANSWER Coalition is an endorser of the following action.

Thousands of community members from the Egyptian, Tunisian, and Arab communities in the U.S., and all those in solidarity with popular movements for justice and liberation.On January 28th, Egypt’s Day of Anger, Egyptian activist groups issued a call for international solidarity, stating that: "We need your solidarity to support the demands and aspirations of Egyptians." It is in response to this call that we are holding the February 5th international day of solidarity.

On February 1st, millions of Egyptians marched in Cairo, Alexandria, Mansoura, Mahalla, Suez, and other Egyptian cities to put an end to 30 years of dictatorship, poverty, unemployment, and torture. The dictator responded by declaring that he would finish his term and not seek re-election! The people of Tunisia continue to make history, struggling to defend their victory and demand a real end to Ben Ali's regime. Massive protests against dictatorships and misery are erupting in Jordan, Yemen, Libya, and other Arab countries.

This Saturday, thousands of community members from the San Francisco Bay Area will stand in solidarity with Egyptians, Tunisians, and all the people in the Arab world fighting for freedom and dignity. Nationwide, US residents are joining in solidarity with Arab popular struggles to voice dissent against the propping up of oppressive regimes globally by the US government. Egypt’s Mubarak-led regime, the second largest global recipient of US military aid, has utilized this funding to suppress free speech and political dissent for many years.

The International Solidarity Day events in San Francisco will include live interviews with journalists on the ground in Egypt, and a march to call upon the American government to take a firm stance in support of the Egyptian people’s just demands.