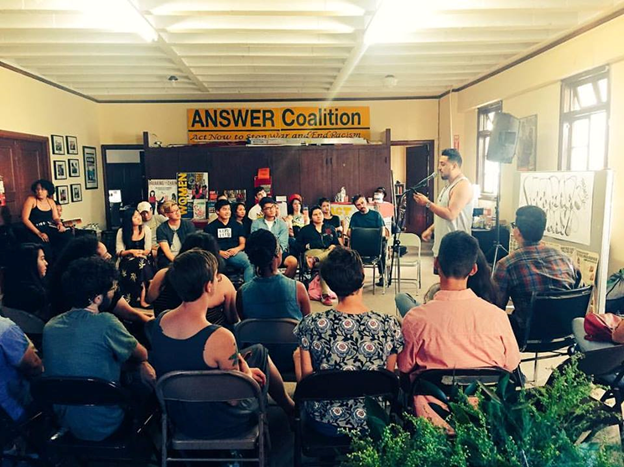 Since President Trump’s inauguration, millions have taken the streets in protest of his agenda of war, racism and attacks on the poor. Even before he took office, people were looking for an outlet to express their anger and frustration with not only President Trump, but also the system that created Trump and gave people the choice between him and widely-hated war-monger Hillary Clinton. It was in this atmosphere that the ANSWER Coalition's Los Angeles chapter opened up its office for the community to come together and express their anger, frustration and art every last Sunday of the month.

This gave birth to the ANSWER-LA open mic series Feedback Sunday. ANSWER has been a key component of the anti-war movement in Los Angeles and is now offering a platform for visual art, poetry, song and all forms of expression to come together as one. Some of the artists who have performed at Feedback Sunday include:

In its first year, Feedback Sunday brought in hundreds of people supporting their local artists and performers. Feedback Sunday is more than an ordinary open-mic – it builds the movement for justice and liberation!

In the last 9 months ANSWER-LA organizers has been busy in multiple actions, including protests on the day of Trump's Inauguration, International Women’s Day and May Day, the Defend DACA march, and various spontaneous actions where the community has come out in solidarity with those targeted by the system. ANSWER-LA organizers have also been involved in solidarity efforts for Puerto Rico, Cuba and the Caribbean islands affected by the hurricanes.

We are looking forward to continue these efforts and community work in January 2018 for season two of Feedback Sunday.