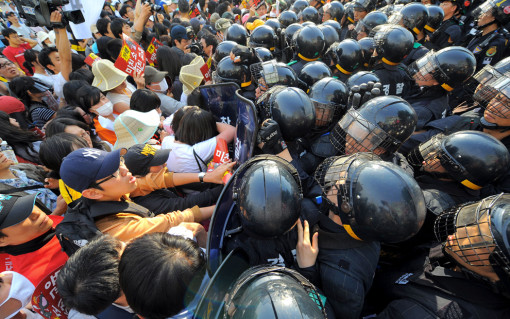 In a climate of increasing repression, the Park Geun-hye government in South Korea is launching the latest in its series of attacks on working people. A retrograde labor reform plan is being set in motion that promises to drive down wages and undermine job security. There is broad and determined resistance to the plan, and workers and farmers are taking the battle to the streets.

The labor reform essentially implements a wish list of measures long advocated by corporate leaders, who hope to see their profits soar as a result. “From the demand side, we should reduce the burden of businesses hiring workers by making the market more flexible,” argues Finance Minister Choi Kyung-hwan. (1) The envisioned “flexibility,” not surprisingly, is expected to be provided solely by workers.

One of the plan’s chief aims is to broaden the use of temporary labor. Among Organization for Economic Co-operation and Development (OECD) nations, South Korea already ranks the highest in its reliance on temporary workers, who currently comprise over one-fifth of the workforce. (2) Temporary workers typically receive few or no benefits, and their wages amount to just two-thirds of their permanent counterparts. For part-time workers, the situation is more dire, with wages amounting to barely over half that received by permanent employees. (3) For obvious reasons, businesses are keen on expanding this arrangement to a wider segment of the workforce.

The labor reform doubles the length of time a worker can be employed on a temporary basis, extending the period to four years. The range of industries in which temporary workers can be utilized is expanding as well. Once a worker’s term of employment expires, there is nothing to prevent a company from rehiring the same worker for another four years period, at the same low wage.

Another measure would eviscerate job security protections by allowing companies to arbitrarily dismiss workers at will, based on subjective factors. The Labor Reform also grants businesses the right to unilaterally change workplace regulations. Business groups point to Japan’s 2007 Labor Contract Law as a model to emulate, as it allowed companies “to modify employment rules without workers’ consent….in order for enterprises to flexibly respond to business environment changes.” From the standpoint of corporations, South Korea’s low rate of unionization is still too high, and “the use of substitute workers should be allowed to respond [to] trade unions’ unreasonable demands through strikes.” (4)

The most controversial aspect of the labor reform is the introduction of a peak-wage system, in which companies would be not only allowed, but encouraged, to slash the wages of workers once they reach the age of 55. The government is selling this concept as a solution to the high youth unemployment rate. The argument is made that with all the money businesses save by slashing the wages of experienced workers, they can afford to hire more young people. The logic is dubious. A company is staffed with the number of workers it feels it needs. Cutting pay for a segment of the workforce does not automatically create new positions. Furthermore, from the corporate standpoint, the prime advantage of hiring young people is that they can be paid low starting wages. By reducing the salaries of experienced workers, there would be less motivation to hire the young.

Companies are awash with cash, yet they are shy about spending. The government reduced the corporate tax rate by three percentage points, in a failed bid to encourage investment. Instead, the tendency for companies has been to let cash reserves mount. (5) The 1,835 companies listed on the Korea Exchange possess cash reserves totaling 845 trillion won – which translates to about $730 billion. That is an increase of 159 percent since 2008. (6) Furthermore, over the last four years, Korean companies have tripled the amount of cash they have stashed in overseas accounts. (7) There is no reason to believe that adding more money to the mountain of corporate cash would induce companies to hire more young people.

Meanwhile, the government has announced its intention to extend to 70 the age at which people can receive a meager pension and benefits. Already nearly half of senior citizens live below the poverty line, and their numbers will only increase under the plan. Those who are fortunate enough to retain their jobs will be compelled to work for less pay while others must rely on their children in order to survive. With the new retirement age, older workers will occupy jobs for a longer period that the government is supposedly so eager to free up for young workers.

The feigned concern for young people is sugar-coating to mask who the real beneficiaries of the labor reform will be. Companies stand to reap enormous profits from cutting the wages of older workers and increasing their reliance on temporary labor. Attempting to pit the young against the old is from the tired bag of neoliberal tricks aimed at distracting workers from connecting the political dots. The business-backed plan has only more temporary jobs to offer young people and a narrowing of horizons.

Education plays a significant role in the lives of the young, and Finance Minister Choi has a vision for its future. He has announced that once progress has been made on labor reform, the government intends to restructure the educational system. “Colleges should be able to provide the kind of talents that industry wants,” he claims. This is another argument from the neoliberal bag of tricks, in which the concept of an education that produces informed, well-rounded citizens is thrown out the window. Instead, the proper role of education is conceived as being nothing more than job training. After all, what is the good of knowledge that does not directly serve corporate profit?

Businesses need to cut the pay of older workers, the Park Geun-hye government argues, because they become less productive as they age. For the same reason, businesses should have a free hand in dismissing workers as their perceived value goes down. What is the basis for this claim? No evidence is offered to back this presupposition, and indeed older workers generally have accumulated much expertise in their positions.

Productivity is lagging due to excessive protection of workers, the government and businesses contend. Yet, in the period of 2007-2012, real wages declined 2.3 percent while labor productivity rose nearly ten percent. (9) So who is it that is losing out? Growing labor productivity coupled with falling pay equals increased exploitation of workers. Business leaders’ real complaint is that the rate of exploitation is not rising fast enough to suit them.

The government’s labor reform is not being introduced in isolation. Already the government has outlawed the teachers union and the government employees union, as well as the labor-oriented Unified Progressive Party based on trumped up charges. Police have repeatedly raided union offices, seized records, and arrested union officials. In a vindictive trend, corporations are taking workers to court over “loss of profits” when workers go on strike, and courts are consistently ruling in favor of the companies. In a recent case that typifies the trend, the Seoul High Court ordered 139 workers to pay a combined total of $2.8 million to Ssangyong Motor Company for holding “unauthorized” strikes. (10) That is more than $20,000 from each worker.

Those in power “have created fear among workers that struggle can lead to losing everything,” explains Han Sang-kyun, chair of the Korean Confederation of Trade Unions (KCTU). “Astronomical fines and seizure of property for so-called damages, warrants for imprisonment, termination from employment, destruction of democratic unions – these are the forms of punishment for those who dare to fight. The skewed playing field, in which the government is unequivocally on the side of capital, seriously undermines the rights of workers.”

Han speaks from experience, having been imprisoned for three years for his role in a sit-down strike at a Ssangyong Motor Company production plant. He currently cannot leave his office, which is surrounded by hundreds of police, waiting to arrest him the moment he leaves the building.

In an attempt to intimidate the KCTU, on November 6, around 200 police raided the headquarters of one of the confederation’s members, the Korean Public Service and Transport Workers’ Union. Police confiscated files and a computer hard drive, and then proceeded to intrude and attempt to search the offices of affiliated unions. Arrest warrants have been issued for twelve union members.

Workers are being squeezed hard, but not enough to mollify business. South Korean corporations view the labor reform as only one stage in rolling back the gains of workers. A statement signed by the Korean Employers Federation, the Korea Chamber of Commerce and Industry, and three other business groups complained that the labor reform plan is “insufficient to make the labor market more flexible,” and “is not even close to the labor reform that our society needs.” Workers can expect more attacks. “Business will not stop to put effort to make the labor market more flexible,” the statement warns. (11)

Resistance is mounting, and a mass mobilization in Seoul is planned for November 14 that is expected to draw as many as 100,000 militant demonstrators. Fifty-three organizations have banded together to organize the action, including the Korean Confederation of Trade Unions, the Korean Peasants League, and the National Alliance of Women. Separate rallies will be held in locations throughout Seoul, and then all of the groups will converge for one mass demonstration at Gwanghwamun Plaza.

While the immediate impetus for the demonstration is the labor reform plan, the grievances against the conservative government are many. The coalition has issued a wide range of demands around which the demonstration is focused, and the overarching theme is to call for an end to repression and a move to a more people-centered society. (12)

Farmers are expected to show up in force, given their anger over the signing of the Trans-Pacific Partnership, which the U.S. Department of Agriculture points out will “break down market barriers for U.S. exporters.” (13) That will come at the expense of Korean farmers, many of whom can be expected to be driven into bankruptcy. Kim Yeong-ho, chair of the Korean Peasants League, condemns the Park Geun-hye government for having “made permanent a structure of exploitation.” He adds: “They’re even trying to roll back democracy….That’s why we are mobilizing for November 14 – for the workers, farmers, youth and students to expose what’s happening and sound the alarm.”

The KCTU has “staked everything in this fight,” says KCTU Chair Han Sang-kyun. If the government proceeds to implement the labor reform, “we are prepared to launch a general strike. And this time, it will not be a one-day strike. We’re talking about stopping production, freight trucks stopping in their tracks, railroad and subway workers on illegal strikes, and paralyzing the country so that the government will feel the outage of the workers. That’s what we’re preparing for.”

The struggle is heating up in South Korea, one which the Western corporate media are sure to ignore. But that does not mean we have to follow in their path of disregard. The Korean people are counting on our solidarity in their time of need.

4) Statement, “Business Stance on the Labor Reform,” The Korea Employers Federation, The Korea Chamber of Commerce and Industry, The Federation of Korean Industries, The Korean Federation of Small and Medium Business, The Korea International Trade Association, August 31, 2015.

11) Statement, “Business Stance on the Tripartite Agreement,” The Federation of Korean Industries, The Korean Chamber of Commerce and Industry, The Korea Federation of Small and Medium Business, The Korea International Trade Association, the Korea Employers Federation, September 15, 2015.

13) “Why Trade Promotion Authority is Essential for U.S. Agriculture and the Trans-Pacific Partnership,” U.S. Department of Agriculture, April 2014.

Gregory Elich is on the Board of Directors of the Jasenovac Research Institute and the Advisory Board of the Korea Policy Institute. He is a columnist for Voice of the People, and one of the co-authors of Killing Democracy: CIA and Pentagon Operations in the Post-Soviet Period, published in the Russian language.