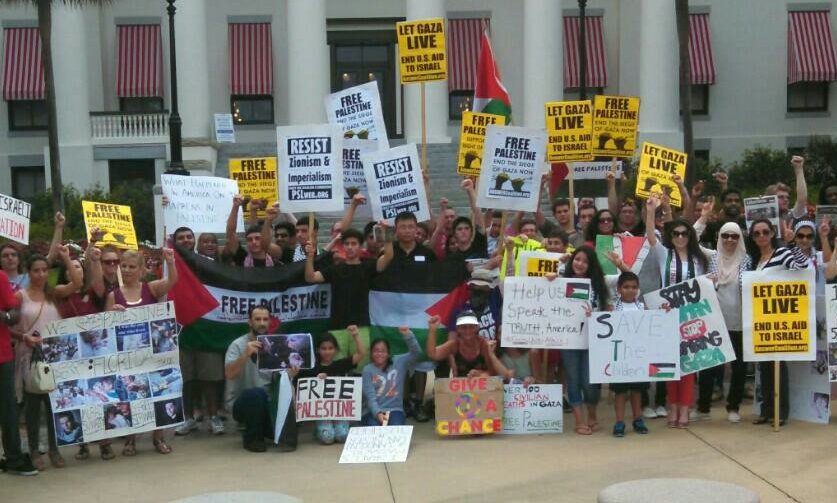 This month, Florida legislators are moving quickly to approve a bill that would punish businesses for endorsing the nonviolent human rights campaign known as the Boycott, Divestment, and Sanctions movement. The unconstitutional bill, HB 527, would create a blacklist of companies that boycott Israel, denying those companies public contract rights and access to the Florida Retirement System.

The BDS movement is a global movement that aims to apply political, economic, and cultural pressure on Israel until it complies with international law and Palestinian rights. Launched by 140 Palestinian organizations in 2005, BDS embraces a method of social change that has worked in Apartheid South Africa, during the U.S. civil rights era, and against fossil fuel companies.

“BDS is a grassroots campaign that has been endorsed by everyone from the Presbyterian National Committee, to the United Methodist National and General Body, to Alice Walker and Desmund Tutu, to internationally acclaimed thinkers, speakers, writers, and entertainers,” said Laila Abdelaziz, Legislative and Gov. Affairs director with the Council on American Islamic Relations (CAIR).

Numerous legal and human rights organizations have opposed the anti-BDS bill for its blatant violation of the First Amendment. Palestine Legal, the Center for Constitutional Rights, the South Florida Chapter of the National Lawyers Guild, and CAIR Florida have urged State Senator Joe Negron to withdraw the companion bill before it passed Senate, citing its unconstitutional targeting of core political speech. For weeks, activists have traveled to the Capitol building in Tallahassee to testify against the bill on human rights grounds as well.

“Israel’s military occupation is in violation of international law and the Fourth Geneva Convention. Its violation of Palestinian human rights is well documented by international human rights organizations,” said Aaron Ellis, a member of Jewish Voice for Peace and Students for Justice in Palestine (SJP) at Florida State University. Ellis has observed Israeli crimes firsthand during trips to Palestine.

Last week, the student body of University of South Florida passed a resolution to divest from corporations that are complicit in human rights violations in Palestine. An important BDS victory, the resolution followed years of tireless organizing by SJP at USF. In 2014, the group gathered 10,000 signatures on a petition calling for USF to divest from companies linked to the Israeli occupation.

Peace House, an activist production group formed last year in Tampa, has released a video, celebrating the victory and comically illustrating the strategy of the pro-Israel opposition. An actor in the video portraying an AIPAC representative explains that, “If you live in Florida and boycott human rights abuses, the state wants to boycott you.” Activists have started an awareness raising campaign about the unconstitutional bill, using the hashtag #StopJoesBill and launching a website, stopjoesbill.com.

In response, USF Hillel has begun a fundraising campaign that appeals to donors by misrepresenting BDS as “anti-Semitic.” Local Zionist organizations such as the Jewish Federation of Sarasota-Manatee have sent internal emails claiming that “groups like CAIR, Students For Justice in Palestine, the Muslim Student Association, Jewish Voices For Peace and others are the NEW ANTI-SEMITES. These groups have ‘crept’ into USF Tampa in a big way.”

“If you see what large pro-Israel lobbies say openly, they are most threatened by student organizing for human rights in Palestine/Israel. They send out speakers to talk about this issue, how to quell this movement,” Abdelaziz told Liberation. “SJP at USF has been dealing with many hurdles and walls that have been put up by the administration and shadowy political forces.”

Despite repression, the BDS movement continues to expand. In 2015, divestment motions passed at Stanford, Princeton, the University of California, and 6 other U.S. campuses, while major academic associations including the American Anthropological Association and National Women’s Studies Association voted to endorse BDS. As a result of the global campaign, Israel continues to lose billions of dollars, according to UN and Israeli government reports.

“It took nearly 30 years for MLK’s call for boycott of Apartheid South Africa to be acted on. How long will elected representatives stand in the way of justice? Because it’s on the horizon,” Ellis told legislators. “In my lifetime, Israel will be held accountable to the international consensus on human rights and international law. Apartheid there will fall.”