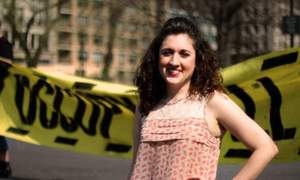 Cecily McMillan, an Occupy Wall Street activist prosecuted for defending herself from assault by a police officer, was sentenced May 19 to three months in prison, a period of community service, unspecified mental health treatment, and five years of probation.

The State accused McMillan of elbowing Police Officer Grantley Bovell while he was clearing out OWS protesters from Zuccotti Park in New York City. McMillan had been offered a plea deal without jail time, but decided to go to trial to exonerate herself. In the courtroom, the police lied — as they often do — and the judge clearly was biased towards a conviction.

A photo taken after the incident clearly shows McMillan's breast bruised from Officer Bovell's forceful grabbing and assault. The prosecutor said that such a claim would be as ridiculous as “aliens coming down and assaulting her.” The conviction and prison sentence is a miscarriage of justice, depriving McMillan of not only the right to protest, but also the right to self-defense.

McMillan’s conviction and sentencing represents a larger repression of activism. Occupy Wall Street’s popular nature sparked the consciousness of thousands of people across the country, which frightened those in power. Immediately, the government and police, working together, saw the need to infiltrate and repress any resistance movement coming from the people.

This state repression resulted in the arrest of over 7,000 people, and countless incidents of protesters being beaten, clubbed and pepper-sprayed. Not a single police officer faced a criminal assault charge for any of their excessive force, and not a single one spent even a minute in jail.

This is a reflection of how the criminal justice system operates. In the same city where McMillan was convicted, the police routinely harass, beat, abuse and even kill New Yorkers from oppressed communities — without facing jail time.

Across the country, the police and the courts have cracked down on those who fight for justice and criminalized those, especially women and oppressed people, who defend themselves against racism, sexism, anti-LGBTQ attacks and police brutality.

The only way forward is to build a unified movement that fights against police repression, the crimes of Wall Street, and violence against women. Free Cecily McMillan and all those unjustly trapped in this country's hypocritical criminal justice system!