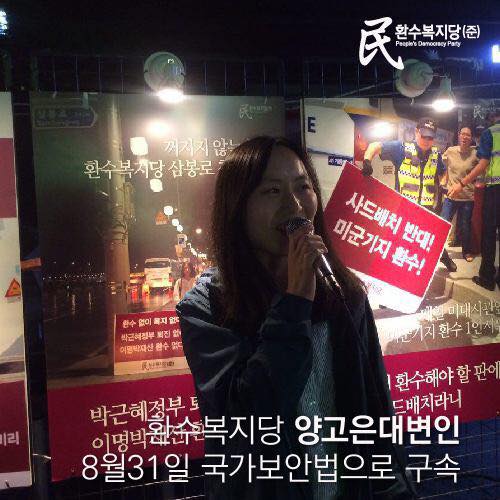 In the latest wave of repression against the people’s movement in the Republic of Korea, the spokesperson of the People’s Democracy Party (PDP) was arrested by government authorities on August 31. She was arrested under the country’s National Security Act which, originally brought into law in 1948, can be wielded to criminalize any mention of aspirations for democracy or reunification.

Yang Go-eun is a brilliant, dedicated, and well-respected activist and organizer in South Korea. Yang was initially held in a cell surveilled by CCTV, but after a hunger-strike by Yang and Park So-hyun, the PDP vice-spokesperson, she was moved to a regular cell.

She was previously the co-spokesperson for the Corean Alliance for Independent Reunification and Democracy. That organization dissolved itself over the 2016 summer to form PDP.

This was a bold and courageous move. The Park Guen-hye regime in South Korea runs a totalitarian-like police state. Propped up by the U.S. government and by around 25,500 U.S. troops stationed in Seoul, the Park regime has declared war against any expression of dissent. In 2014 the Park regime used the National Security Act to outlaw the Unified Progressive Party. In a move that bespeaks just how reactionary the government is, the Park regime claimed that the Party’s platform, because it advocated “progressive democracy,” was subversive and pro-North Korea. The UPP was banned, its offices were ransacked, its representatives in the National Assembly were removed and the Party’s leader was arrested.

Despite this repression, the progressive forces in South Korea felt that it was important that they have a proper political party and that they operate out in the open. The next presidential election is in December 2017, and the South Korean people need a progressive alternative. The PDP has kept an open-air office headquartered in downtown Seoul since their formation.

As tensions on the Korean peninsula rise, progressives in the U.S. must raise our calls for an end to the U.S. occupation of the South and for the U.S. to sign a peace treaty and normalize realizations with North Korea. We in the ANSWER Coalition demand: Free Yang Go-eun!