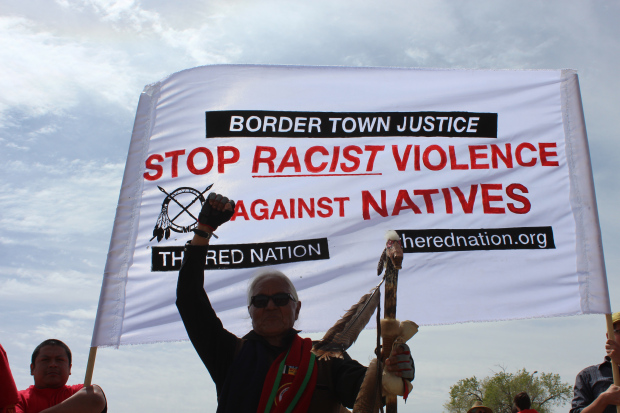 On April 4, The Red Nation along with 80 community members stood up and spoke out against the extreme atmosphere of racist violence in Gallup, New Mexico. Indigenous people are confronting the sharp increase of unnatural deaths since the change of management of a local detox center, Na Nihzhoozhi Center Inc. More than 180 people have died since then due to the negligence of services, which disproportionately target poor and homeless Natives. This can be seen as nothing other than a continuation of settler-colonial violence against Indigenous people.

Demonstrators came out to expose the many injustices against Natives and marched through the streets of Gallup chanting “Until racism is undone, Native people stand as one!” A five-car caravan from Albuquerque joined the truly historic march in solidarity. A community member stated that this was only the fourth march ever that had taken place in Gallup.

The city residents stopped and honked their horns in response and raised their fists as the march made its way to the Chamber of Commerce. In a town built on a continued colonial relationship, this demonstration sent the message that the town (and all its businesses) belong to Native people from whom it is was stolen.

Gallup, a a town bordering surrounding reservations, has as its main source of profit predatory businesses such as high-interest loan companies, liquor stores, pawn shops, car dealerships, and other businesses which profit from the immense exploitation of Native lives and land.

“This land is traditionally Indigenous land. We are here today to tell the City of Gallup, to tell its economic system that profits off of our death, that we are reclaiming this space as Indigenous space. These streets, these businesses, this government, all of this should be a safe space where Native lives are celebrated and they’re valued. But instead, Gallup makes profit off of Native lives and gives absolutely nothing back to Native people. Our people dying in the streets and just getting walked over,” stated Melanie Yazzie, a co-founder of The Red Nation, at the press conference in front of the Chamber of Commerce.

“I want to read you something that the mayor of Gallup has said publicly: ‘There is no such thing as racism in Gallup.’ It is obvious that the mayor of Gallup refuses to be accountable for the grim realities facing our Navajo in Gallup. Our relatives are being bullied into shame and silenced, herded around the city like sheep and simply forgotten. The City of Gallup needs to be accountable starting today,” said Jeremy Yazzie one of the co-organizers of the march.

“I am Stella, a Diné transgender woman, a human being, wondering why this place is so harmful. Why continual violence is being committed toward my homeless relatives and LGBT family. I’m here because we need a immediate change… The violence and racism in Gallup is costing human lives. Violence and racism saturates this town. It dehumanizes us to where we become invisible. It takes our culture and exploits it. We as Natives have become expendable and a nuisance to their gentrified existence. This past year, gates were built to separate our homeless relatives in a place that makes them the problem. Many of our homeless relatives walk hours on end hungry and broken, while city officials wonder why the hell we are the way we are and how to resolve us, the problem. So many years have passed and we are still being exterminated.” exclaimed Stella Martin-Johnson a co-organizer of the Gallup march.

One hundred and eighty signs with the names of those whose deaths were due to the violent nature of the city surrounded the Chamber of Commerce as symbolic tombstones to expose the crimes of the city. Various community members were compelled to take part in the speakout to share their stories and experiences.

Radmilla Cody, a former Miss Navajo and a well known Grammy winning musician, sang a traditional Navajo song to wrap up the event.