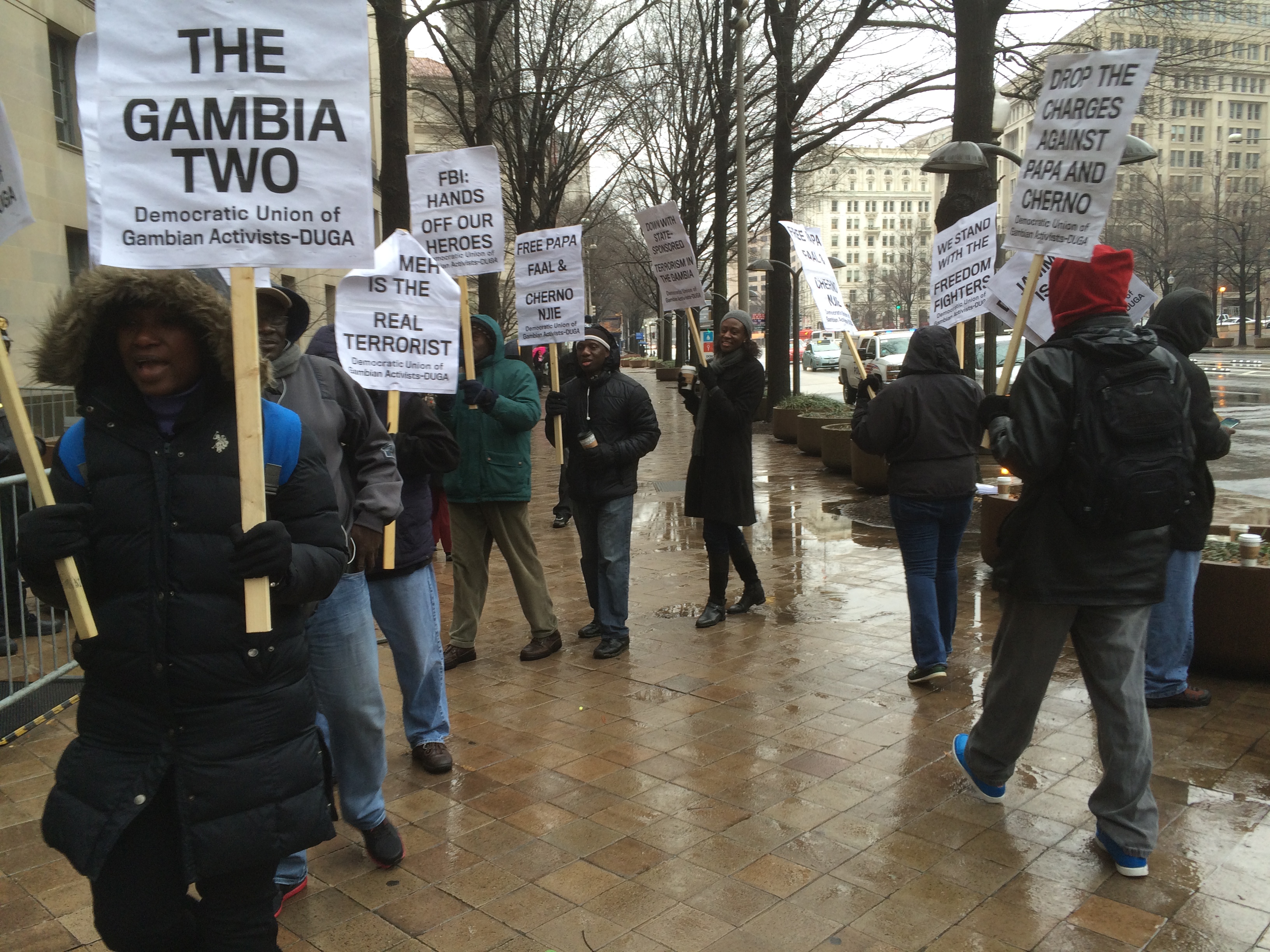 A group of Gambian protestors led by the Democratic Union of Gambian Activists (DUGA) gathered outside the Department of Justice on Jan. 26 to demand the release Gambian activists, Papa Faal and Cherno Njie. Faal and Njie—known as the Gambian Two—made news earlier this month for attempting to overthrow the Gambian dictator, Yahya Jammeh, and are currently being held in U.S. prisons due to their U.S. citizenship.

Coordinated actions took place in other cities, including Seattle, Wa, home to a large Gambian community.

The Jammeh government came to power following a 1994 military coup in which the military cited low wages and poor living conditions. Over twenty years later, The Gambia stands as one of the poorest and most unequal countries in the world. It also has some of the most repressive anti-LGBTQ laws in the world and has essentially turned a blind eye to the Gambian HIV/AIDS crisis by discouraging the use of antiretroviral drugs.

Conditions in The Gambia, however, are hardly unusual for a fragile, U.S.-backed regime. According to Ousainou Mbenga, present at the demonstration and an organizer with DUGA, “Evidence has surfaced in the years after [the 1994 Gambian coup that] the U.S. ambassador at that time [to The Gambia] had been giving suggestions like it’s time for the government to leave… so they started spreading mayhem. The first incident that happened was the murder of the Minister of Finance, who was burned to death in his Mercedes-Benz, and after that there was a wave of terror and horror. For 20 years, that’s what happened under The Gambian regime. And all of these presidents of imperialist countries have been condoning this kind of crap. It just reminds of Pinochet , Samozas, and the U.S. government always just winks and nods.”

Political corruption and state-sponsored terrorism were not, however, met without resistance in The Gambia. Gambians both in The Gambia and in exile have been struggling to end the rule of Jammeh, who the exile-protestors referred to as the “500 Pound Gorilla.” Faal and Njie represent two of the most recent fighters in this struggle.

“Papa Faal actually is a member of DUGA. He served in the U.S. Air Force… and his conscience would not allow him to just sit by and watch what was happening in The Gambia and do nothing about it,” said DUGA activist, Pasamba Jow. He continued, “After all the attempts that have been made by Gambians to have democratic change without success, people felt it was necessary to [use] other means. Papa, together with his colleagues, decided they would go to The Gambia to end the misery of the Gambian people… In the eyes of Gambians, they are heroes. They are doing what any Gambian person would have done—that is to fight to free your people from bondage.”

After the Jammeh government drowned Faal and Njie’s uprising in blood, the Two were extradited to the United States to face charges under the 1794 Neutrality Act, which states that any person who takes military action “against the territory or dominions of any foreign prince or state of whom the United States was at peace that person would be guilty of a misdemeanor.”

Besides the laughable present-day application of a law arcane enough to make reference to acts of war against another country’s prince, anyone vaguely familiar with the U.S. policy towards Libya, Syria, Mexico and Cuba could point out the absurdity double-standard being applied against the Gambian Two. In all four countries, lawmakers and the criminal “justice” system have looked the other way as US citizens and residents have joined anti-people terrorists and rebels in those countries, simply because those governments were not amenable to U.S. imperial policy. On the one hand, genocidal Libyan “freedom fighters” were welcomed with open arms and invitations to speaking tours after overturning the Qadaffi government, while on the other the Gambian Two are being lambasted in the imperialist media and are facing trial.

In short, the trial of the Gambian Two is but another act in the U.S. criminal “justice” circus, coming on the heels of the acquittal of Darren Wilson, Daniel Pantaleo and George Zimmerman. Those seriously committed to people’s freedom from oppression recognize it is right to rebel and speak with one voice: Free the Gambian Two!