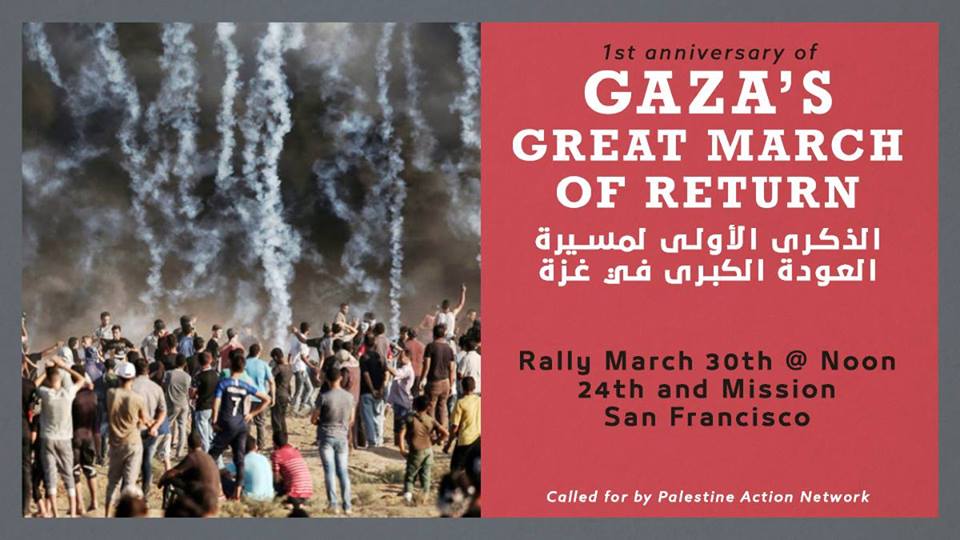 We call on supporters of freedom, justice and humanity to join us in solidarity with Gaza and the Palestinian struggle as a whole. We will meet at 24th and Mission BART in SF, then march through the Mission.

Saturday, March 30, 2019, marks the first anniversary of the Great March of Return in the Gaza Strip and the 43rd anniversary of Land Day in Palestine. This is an invitation for supporters of justice around the world to raise their voices. One year ago on March 30, tens of thousands of Palestinian refugees from Gaza began weekly peaceful protests calling to lift the Israeli-Egyptian blockade and for the right to return to their ancestral homes. Since the Great Return March protests began Israeli snipers have killed 256 Palestinian men, women and children in cold blood and injured 30,000. Meanwhile today, U.S. made bombs are literally raining down on 2 million trapped Gazans.

The Higher National Commission for the March of Return and Breaking the Siege announced preparations to organize a mega march on the first anniversary of the March of Return and on the Land Day, March 30. In a news conference held in Gaza, head of the Commission Khaled al-Batsh said that this event would be one hundred percent peaceful and would take place in the five border camps of the March of Return. He also called for a general strike in all of Palestine on the same day of the anniversary, urging Palestinians in the West Bank and the world to organize marches to confront the dangers threatening their lives as a result of Israeli barriers and settlements. Join us! #GreatReturnMarch #March30

Sponsored by the Palestine Action Network, of which ANSWER Coalition is a member.