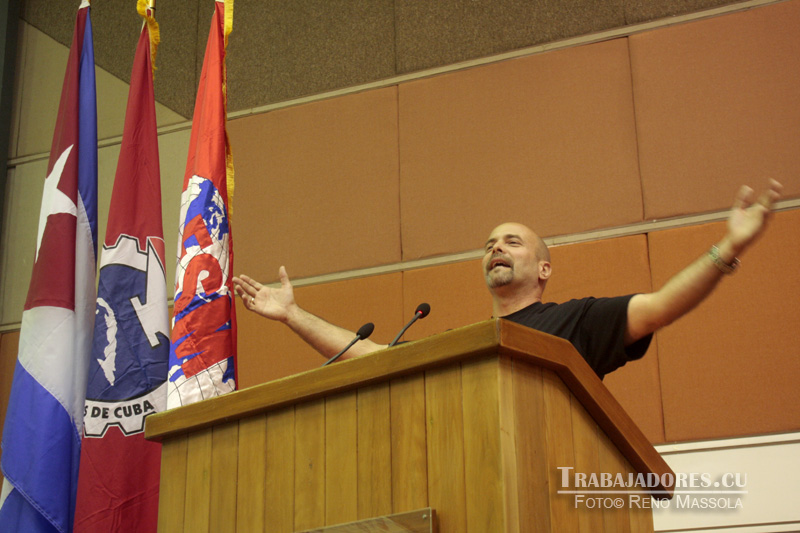 In his final comments at the International Solidarity with Cuba Conference, held in Havana May 2, Gerardo Hernández of the Cuban Five asserted that the freedom of the anti-terrorists would not have been won without the efforts of all present:

“Thank you brothers and sisters of the world, you should know that when we say thank you, it is not a formality. Deep within our hearts we know that if we are here, it is due, in large measure, to the efforts of friends like you around the entire world, who did not rest until they saw us here. This is how I begin my words of gratitude,” Gerardo said.

“You are representative of a broader group of brothers and sisters who could not all be here, but convey our gratitude to them, everyone was important to the unity of forces which allowed us to be here today, with our families and people.

“Yesterday (May 1) was an historic day, a longed-for dream come true, and even greater because of your presence. Today we met each other and we are a big family which must become increasingly united, become one, since many battles remain, such as that of Oscar López and so many others who have the right the enjoy the freedom we have,” he continued.

He explained that the Cuban Five are ready to support any just cause, wherever their efforts are needed. He said the delegates, “What do we do now? You tell us.”

“The blockade remains in force, and if some day it is eliminated, we will remain battle ready, so that no one imposes it again. We revolutionaries can not rest, because… no, we don’t feel like being a U.S. colony, and yes, we do feel like being a Latin American nation, as I heard people chanting in the Plaza yesterday,” Gerardo continued, while leading the crowd in the chant.

“In the name of the Five, of our families, who many of you received with so much affection, we thank you eternally. You have asked me about Gema, we were not able to bring her, following the doctor’s recommendations, and due to the weather, but she is here with us, because she, as well, came to be because of all this solidarity,” he said.

Gerardo made it clear that the Five were not released because of a negotiation, but as a result of the unified efforts of many, emphasizing that the long hours and days of resistance over 16 years required strength, and that the support and solidarity of so many people was one of the sources of much needed inspiration.

“Today,” he concluded, “you congratulate us, and you recognize that the resistance of the Five is no more than the resistance of the Cuban people, which, for more than 50 years, imperialism has been unable to break. They have not isolated us; they themselves are the ones who have been isolated, since a socialist Cuba perseveres here, a people which is more determined than ever to struggle for its system. That is why we continue to trust in your support, your spirit of struggle, and the solidarity of all of you brothers and sisters.”