Global day of action against Monsanto a big success 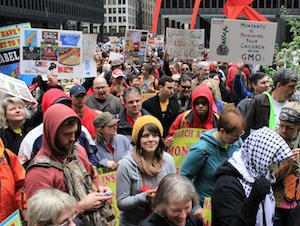 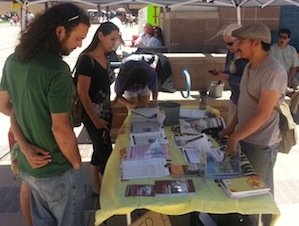 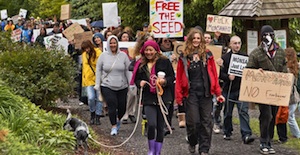 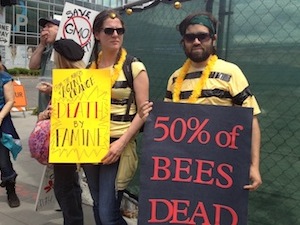 Activists from the ANSWER Coalition and the Party for Socialism and Liberation, a member organization of ANSWER, participated in many of the Monsanto protests across the country May 25, part of the global day of action in more than 400 cities. Following is a selection of reports by participants received by Liberation News.

Hundreds of people marched through downtown Albuquerque to protest the incursion of Monsanto and big agribusiness on food production in New Mexico, the United States and all over the world.

The issue of GMO production is especially sensitive in New Mexico because the world-renowned New Mexico Green Chile is facing attempts by giant agribusiness to introduce genetically altered seeds into the production of the green chiles, a center of New Mexican culture for hundreds of years. Chile production in New Mexico is currently cultivated and harvested by local farmers.

PSL members handed out placards and sold Liberation newspaper to the crowd, getting a significantly positive respond from people at the protest.

Joel Gallegos, a lead organizer for the PSL in Albuquerque, spoke with Liberation about the response. "People especially loved the centerfold" he said. "But in addition to that, there was widespread agreement with the premise that the profit system is the problem, and that capitalism as a system has to go. This is so encouraging. We got scores of names of people interested in the PSL."

On May 25, Chicago took to the streets with cities worldwide to protest the agribusiness giant Monsanto. The rally and march brought out over 800 people and filled Federal Plaza. Many wore red in solidarity with other cities, and many dressed as bees, corn or the monarch butterfly. The Chicago branch of the PSL went with signs saying, “To save the planet: Shut down Capitalism.” The protesters marched from Federal Plaza to the Thompson Center in Chicago’s downtown. Along the way, they chanted: “Hey hey, ho ho, Monsanto has got to go!” and “When the environment is under attack, what do we do? Stand up, fight back!” Cars and passersby honked and cheered on the protesters.

At the end of the march was another short rally in which people continued to chant and vow to continue the fight against Monsanto.

A large, diverse crowd of thousands of protesters converged in Pershing Square park in downtown LA at 10 a.m. People of all ages and backgrounds come from all over Southern California, bringing handmade signs that said things like “Protect the land, protect our families” and “Either mankind will stop Monsanto or Monsanto will stop mankind.”

At 11 a.m., a vigorous march through downtown began, and soon marchers filled the streets in a sea of protesters that stretched many city blocks in length. Many protesters chanted “Hell no, GMOs!” as they marched to City Hall.

ANSWER Los Angeles participated in the march and distributed signs that said, “Smash corporate control! Healthy food is a human right!” The Party for Socialism and Liberation also had a strong contingent. PSL members handed out leaflets for an upcoming study group on capitalism and the environment.

The PSL banner read: "Monsanto is the symptom, Capitalism is the disease, Revolution is the Cure! Food for people, not for profit"—making the point that the struggle is not just against one company but against a system in which food is produced primarily for profit and not to meet human need. The banner was extremely popular and was photographed and shared widely on social media.

The march ended with a rally at City Hall, where various speakers and performers, including actor Ed Begley Jr., addressed the crowd. Each speaker stressed that now was the time to take action and stop corporations like Monsanto from destroying our health and our planet.

At least 340 people turned out on a blustery and rainy day New Paltz, N.Y., to take part in a rally and march opposing Monsanto, the monster biotechnology company. The rally at Peace Park featured several local speakers, including a farmer who passionately opposed genetic modification in the food supply. They also demanded that food corporations inform the purchaser on the label if it is a GMO product.

Marchers left the rally with chants and many homemade signs. They were supposed to walk only on the sidewalk but marched in the street instead, blocking busy Main Street traffic for about 15 minutes until police cars arrived. The march continued on the sidewalk, escorted by town and state police.

A diverse crowd of more than 300 marched and rallied against Monsanto. Starting at the Cesar Chavez Arch on the San José State University campus, the crowd, chanting "Hey hey, ho ho, GMOs have got to go," marched eight blocks to rally at the southern end of Plaza de Cesar Chavez near the city center. Dr. Ann López, a research associate at UC Santa Cruz and well-known for her research of farmworker conditions in Mexico and California, presented a powerful, detailed and highly educational indictment of Monsanto. Eliciting repeated chants and applause from the audience, she concluded by calling for "this monster Monsanto" to be shut down. Addressing the federal government, she asserted, "If you don't shut down Monsanto, we will!"

Copies of the special environmental issue of Liberation were distributed, including to a libertarian couple who were Bitcoin (cyber currency) enthusiasts and three high school students, one of whom assured, "Socialism is the future."

As many as 4,000 people turned out in Seattle as part of the international day of action against Monsanto. Protesters of all ages rallied at Westlake Park in downtown Seattle, then marched to the Bill and Melinda Gates Foundation. BMGF is possibly better known for its promotion of a corporate agenda in education, but the foundation headed up by the richest man in the world also has a hand in promoting genetically modified seeds in Africa through its AGRA program (Alliance for a Green Revolution in Africa). According to Seattle-based AGRAWatch, AGRA and BMGF partner with companies like Monsanto to spread industrial, high-tech agriculture featuring “improved” seeds and chemical fertilizers, which will lead to greater farmer indebtedness and dispossession.

Many protesters wore creative costumes or carried handmade signs and props; especially popular were bee suits, referencing the destructive role Monsanto products have played in the worldwide crisis of colony collapse disorder. Others carried props representing genetically modified corn. Marchers chanted: “We get sicker, Monsanto gets richer—we won't eat corporate seeds of greed!” and “When our food supply is under attack, what do we do? Stand up, fight back!”

At 1 p.m., people started to rally in Stacy Park for the march to the Monsanto headquarters in Olivette, a suburb of St. Louis. Organizers played music dedicated to the fight against Monsanto and its genetically modified food. Monsanto tells farmers which crops they can and cannot grow. One person affected, Nancy Chasteen, said, “We need to speak for those who cannot speak and we should have the freedom to choose what we can put in our bodies, and to show my children they have a right to stand up for what they believe in.”

People marched to Monsanto headquarters chanting "Hell no GMOs," gaining in numbers as they went. The enthusiastic protesters received much honking support from drivers, and the march was live-streamed on the Internet.

Around 150 people gathered outside the Onondaga County Courthouse in Syracuse, N.Y., for a rally and march. The purpose was to draw attention to GMO crops, Round-Up pesticide, bee colony collapse disorder and the monopolistic corporate behemoth Monsanto, which is responsible for all of the above. An impassioned crowd cheered and held signs, while members of the community—including organic farmers, workers, immigrants, teachers, and civil activists, among others—gave speeches and shared information about the toxic influence of Monsanto products, while also drawing attention to the "Profits over People" attitude that dominates the capitalist system.

“We have a right to know, GMOs have got to go!” “Down with Monsanto!” and other chants filled the air as the crowd gathered together and began to march towards the Federal Building. Protesters called for the labeling of GMOs on products, boycotting Monsanto, further testing on the health effects of GMO products and "Round-Up-Ready" crops, the expulsion of Monsanto executives from the FDA and other government positions, as well as an end to corporate domination and the destruction of a system that rapes our environment and cares little for the well-being of the general populace.

Multiple copies of Liberation were distributed throughout the event.

On Saturday morning, 200 people gathered on the steps of the Old Capitol in Tallahassee, Fla. People of all ages held signs saying “Control the food = control the people,” “I am a scientist and I oppose Monsanto,” “Save our pollinators,” and “Pollution, poison, poverty, profit.” Several people gave passionate speeches, including: Farmer Herman Holley of Turkey Hill Farm; Nathan Ballantine, blogger and co-founder of the Tallahassee Food Network; Simon Bevis, garden manager at Salvation Army Garden; and Priscilla Hudson, a local beekeeper whose health recovered after she stopped eating GMOs. They spoke about the right to know what’s in our food, the need for sustained social movements, and the negative effects that Monsanto has on farmers, consumers and the environment.

Hundreds demonstrated in front of the White House in Washington, D.C., as part the worldwide day of Occupy Monsanto actions. Following an opening rally, the group marched through the streets of downtown D.C., chanting "Hey, hey, ho, ho, Monsanto has got to go" and "No, no, GMOs." In the lead was an Occupy Monsanto lead banner reading "Monsanto puts greed of the 1% over needs of the 99%." The march concluded at the D.C. headquarters of the Monsanto Company—which serves as the center of their lobbying operation—where a closing rally was held and a "die-in" focusing on the damage Monsanto wreaks on the environment.