Haditha massacre: Covering up war crimes in a criminal war 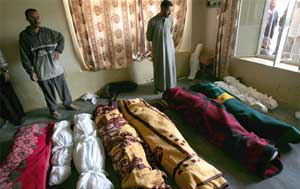 The Pentagon has decided that U.S. Marines who killed 24 Iraqi civilians in Haditha on Nov. 19, 2005, will serve no jail time.

If only Private Bradley Manning had slaughtered innocent Iraqi civilians he would have been set free by the Pentagon. The Pentagon brass has kept Manning locked up for 21 months. They say that he leaked the 2007 video of a U.S. helicopter gunship massacring Iraqi civilians and journalists. Manning is facing life in prison for allegedly releasing classified documents and information to WikiLeaks that revealed U.S. war crimes.

In contrast, the Pentagon decided on Jan. 23, 2012, that there will be no jail time for any of the U.S. Marines who systematically and deliberately slaughtered 24 Iraqi civilians in their homes in Haditha, Iraq on Nov. 19, 2005. This was not a battle. They entered the homes of unarmed civilians at night and murdered children and their moms, dads and grandparents. The murdered were in their pajamas.

The superior officers of the rampaging Marines in Haditha lied and covered up the crime. The Pentagon brass, then under the leadership of Donald Rumsfeld, knew about the massacre and covered it up as well. A Pentagon statement issued just after the Haditha massacre described the incident as an insurgent ambush on a joint U.S.-Iraqi patrol that left insurgents, civilians and U.S. troops dead.

If only Private Bradley Manning had slaughtered innocent Iraqi civilians he would have been set free by the Pentagon.

That the Pentagon lied about this war crime should be understood as the norm and not an exception. All Iraqis were seen as the enemy or potential enemy. Indeed, Iraqis from across the political and religious spectrum opposed the occupation of their country. As in the Vietnam War, rampant racism allowed occupying forces to treat the occupied people as less than human. For those involved it was just one more war crime in a criminal war.

The truth about the massacre came out when investigative journalist Tim McGirk broke the story in Time Magazine in March 2006. McGirk had been in contact with an Iraqi human rights organization that provided a video of the aftermath of the massacre. The evidence revealed the bodies of bloodied children in their pajamas, killed in their homes by grenades and direct gunfire.

The trial of the Marine unit’s leader, Sgt. Frank Wuterich, who was facing life in prison for the massacre, came to an abrupt end this week when he accepted the Pentagon prosecutor’s plea offer. In return for pleading guilty to negligent dereliction of duty, Wuterich was demoted in rank and will have his pay level reduced. Earlier, six other Marines had their charges for their roles in the massacre dropped, and one was acquitted. Those who carried out this known and documented war crime will suffer no real punishment at all.

Even if these individual Marines had been convicted, however, the big shot war criminals—both in and out of uniform—who ordered the invasion and occupation of Iraq, who authorized and institutionalized torture, secret prisons and targeted assassinations, have never been charged for their crimes.

This is part of an unspoken bipartisan agreement between the two parties of imperialism. Both Republican and Democratic administrations are unofficially immunized for any crime committed in the service of the U.S. global empire.

Iraq was torn apart by the U.S. war of aggression. No one knows for certain how many Iraqis perished, but it is minimally in the hundreds of thousands, and probably well over 1 million. Many more suffered grievous wounds. More than 5 million became internal and external refugees. A whole generation of Iraqi children suffered the trauma of living through a decade of war. Every family faced the fear and terror of simply driving up to a U.S.-staffed checkpoint in their own city or town. The rules of engagement for nervous U.S. soldiers was “shoot first, ask questions later.” After all, U.S. casualties inflamed anti-war sentiment at home, while Iraqi casualties were not even a brief media blip.

U.S. crimes in Iraq are being whitewashed inside the United States. Not only were Bush, Cheney and Rumsfeld shielded from prosecution by the Obama administration, but the semi-official narrative of the war can only be described as an example of falsification and national chauvinism.

When President Obama spoke to announce the removal of U.S. troops from Iraq in December 2011, he chose to speak at the military base in Fort Bragg to thousands of assembled soldiers. The speech was widely publicized and his version of history was designed to reach into homes throughout the United States.

He paid tribute to the suffering of U.S. soldiers in Iraq, but did not say anything about the Haditha massacre, the destruction of the city of Fallujah, the torture and humiliation at Abu Ghraib prison, or the multiple other episodes that are permanently imprinted on the consciousness of the Iraqi people. That comes as no surprise. But President Obama’s speech did not include even one word about the suffering of Iraqis from the war.

He said, “We know too well the heavy cost of this war. More than 1.5 million Americans have served in Iraq—1.5 million. Over 30,000 Americans have been wounded, and those are only the wounds that show. Nearly 4,500 Americans made the ultimate sacrifice—including 202 fallen heroes from here at Fort Bragg—202. So today, we pause to say a prayer for all those families who have lost their loved ones, for they are part of our broader American family. We grieve with them.”

The attempt to omit from history the pain and suffering—as well as the heroic resistance—of the Iraqi people must be challenged and contested. This falsified history is a prescription for promoting national chauvinism in the broader population. Such consciousness is useful for the Pentagon and the Military-Industrial Complex as they continue the era of endless imperialist war. We need to tell the truth about Iraq and expose the lies of the Pentagon.

Instead of endless war and occupation on behalf of capitalism and imperialism, we promote a program of international solidarity. Millions of people in the United States recognize that the war and occupation are great crimes. They support the demand that Iraq be paid reparations by the U.S. government for the wanton acts of death and destruction inflicted by the invading forces.

Also read: The Logic of War Crimes in a Criminal War, written by Brian Becker and Mara Verheyden-Hilliard in 2006.

The ANSWER Coalition is organizing every day all over the country against war, racism and economic injustice. Please make an urgently needed donation now to support this critical work.