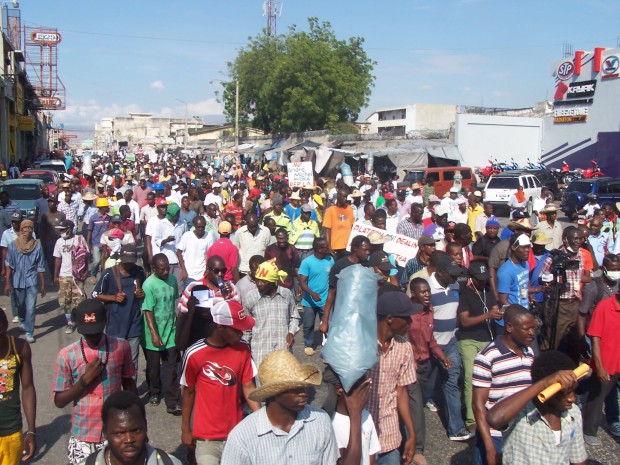 Since coming to power on May 14, 2011, President Michel Martelly has managed to avoid holding elections in Haiti. This has brought on a political crisis that is upending Haiti’s democratic institutions and people’s daily lives. It has resulted in a rising cost of living, devaluation of the Haitian gourde, Parliament’s dissolution, and crazily arbitrary judicial actions and maneuvers.

Now finally the crisis has led to the formation of a de facto government, led by a new and thoroughly illegal prime minister, perennial opportunist politician Evans Paul, known as Konpè Plim or K-Plim.

Meanwhile, former Prime Minister Laurent Lamothe, who resigned in the face of popular protests on Dec. 13, is suspected by many of having embezzled or stolen millions of dollars while in power. However, there has been no accounting done of his regime’s management. The people demand accountability, and if necessary, the arrest of Lamothe.

Martelly’s unilateral choice of Paul to be PM is an affront. Although the former playwright had credentials as an anti-Duvalierist artist and activist and was the manager of Jean-Bertrand Aristide’s successful 1990 presidential campaign, he became a bitter Aristide opponent in later years and helped lead the Feb. 29, 2004 coup d’état against his former political ally.

On Jan. 1, 2014 in Gonaïves, Paul outraged his former comrades by joining former dictator Jean-Claude Duvalier and neo-Duvalierist former general and dictator Prosper Avril in celebrating the 210th anniversary of Haiti’s independence with President Martelly. In 1989, Avril’s soldiers had severely beaten Paul and two other activists and then broadcast their bruised and bloody faces on national television.

In the lead-up to the current crisis, some political actors had called for a political agreement and a consensus government of public salvation. This might have resulted from good-faith negotiations with the opposition political parties and other state institutions. However, Martelly’s intransigence and arrogance torpedoed any such negotiations. He unilaterally chose Evans Paul as prime minister and then installed him on Jan. 16 without Parliament’s approval, as required by the Constitution.

So K-Plim has become another de facto prime minister, just like Gérard Latortue, who Washington installed in power in Haiti following the 2004 coup against Aristide.

“I did not campaign for the candidate Martelly, and I did not vote for him either,” Paul said at his installation. “He campaigned with a political program. Today, I have become his prime minister, so I have to respect his program. I’m not the prime minister of a political party. My government has two specific objectives: to create the conditions for holding elections and to ensure the continuity of the state.”

Do you hear that? To those who are calling for a consensus government, Evans Paul is telling you that is not his agenda. He intends to “ensure the continuity” of Laurent Lamothe’s regime, which was characterized by political corruption, the looting of state resources, lies, and subservience to the U.S. and its allies.

Faced with this reality, the Dessalines Children Platform (PPD), the Lavalas Family party (FL), Patriotic Movement of the Dessalinien Opposition (MOPOD) continued their mobilization in the capital Port-au-Prince and other cities on Jan. 16, 17, and 20, calling for Martelly’s resignation and the formation of a provisional government. Organizations like the Dessalines Coordination (KOD) also stress the need to demand the immediate departure of the 7,500 United Nations troops (MINUSTAH) presently occupying Haiti.

“Down with Martelly! Down Evans Paul! Down with de facto power! Down with occupation!” the demonstrators chant. “Long live free elections without foreign interference! We do not want decrees, Martelly must go!”

The protesters also condemned the U.S., France, Canada, MINUSTAH, the Organization of American States (OAS), and the European Union for supporting Martelly in his establishment of a de facto regime. Demonstrators denounced the unjustifiable presence at the Haitian Parliament on the night of Jan. 11, 2015 of U.S. Ambassador Pamela White, Canadian Ambassador Paula Valdwell St-Onge, MINUSTAH chief Sandra Honore, and OAS representative Frédéric Bolduc. They pressured Haitian lawmakers to extend their mandate in defiance of the Constitution.

During the second day of protest, Jan. 17, violence flared. Government agents infiltrated the crowd to provoke and steal from protestors. In front of the headquarters of the social-democratic party Fusion, which is allied with Martelly, protestors were met by stone-throwing regime partisans and responded with rocks. Police officers began firing with leveled weapons at the demonstrators. Among the wounded were Mario Jean Musca, from the Carrefour neighborhood. Angelo Adrien, secretary general of the popular organization “Embark for Change,” was wounded by several bullets in the neck. Jean Jacques Jean Claudel, from the Solino neighborhood, was shot in the leg by police in a vehicle registered as CIMO 1-618. Former political prisoner Jean Robert Vincent received a bullet in the arm. Pastor Semereste was shot in the nose. Another protester who goes by the name “Nickenson of Haiti” was arrested and beaten by police officers, and taken to the Canapé Vert police station. Also injured were Julmus Pierre, Jean Bernard Fils-Aimé, and a man known only as Legros. Pictures of the wounded demonstrators have circulated widely on the internet.

Despite this repression, another massive anti-Martelly anti-MINUSTAH march took place in Port-au-Prince on Jan. 20. Opposition leaders continue to call for popular resistance to stand up to the Martelly/Paul de facto regime as well as to the imperialist nations which support it against the manifest will of Haiti’s majority.