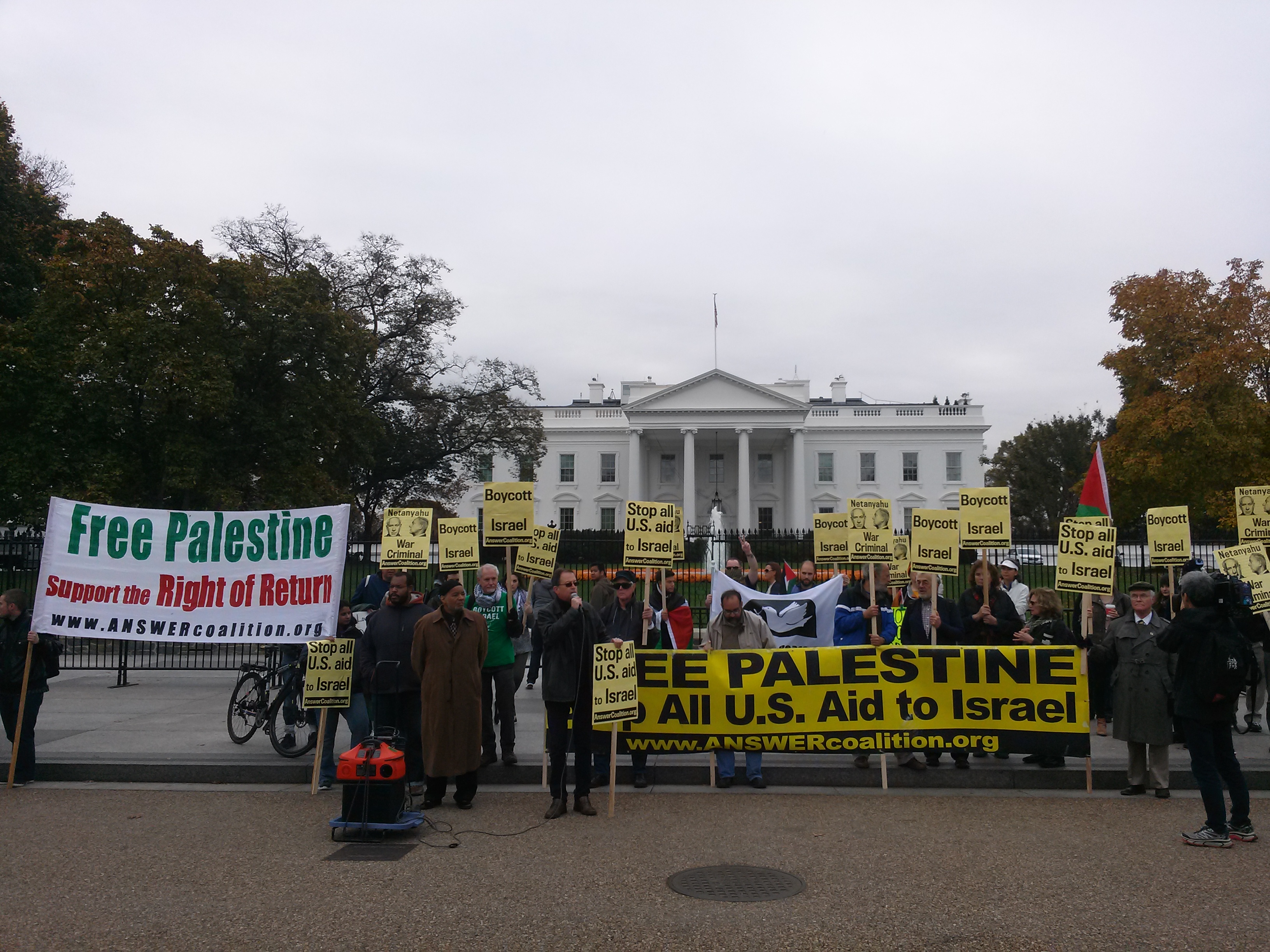 "There has been a sea change in U.S. attitudes toward the Israeli government and its policies and toward U.S. aid toward Israel," Brian Becker, ANSWER's national coordinator, said via megaphone. Israel's "terrorism" in recent years, he said, has meant that "many people, including a large sector of the Jewish American community, are now critical of Israel instead of giving a blank check to Israel."
--excerpted from Washington Post on Nov. 9, article by Dana Milbank

The morning of the White House visit between Netanyahu and President Obama, people lined Pennsylvania Avenue with signs demanding that the United States cut all aid to Israel and calling for Netanyahu to be referred to the International Criminal Court for War Crimes and Crimes Against Humanity.

Pressure is mounting all over the world to boycott, divest from and sanction the apartheid state of Israel. At the very moment that we were in the streets again in Washington, D.C., the European Union passed a new rule requiring that products made by Israeli settlers in the West Bank be labeled as such in order to be sold. The Israeli ruling government is reacting with extreme alarm because they are fully aware that an international movement opposing the Israeli apartheid state is continuing to grow step by step, and they know that this could be -- as it was with the South African apartheid regime -- a decisive factor in the outcome of the struggle.

We want to thank everyone for their support. It is at times like these in history that a grassroots movement can make a decisive impact in the struggle for justice. In the last month, more than 2,700 Palestinians have been shot, either by live ammunition or with so-called rubber bullets. More than 70 have died. Young people are being rounded up, brutalized and killed by the occupation forces. Very little of this is reported by the corporate-owned media. It is our job to expose the media and tell the truth.

The ANSWER Coalition congratulates the other organizations -- The U.S. Campaign to End the Israeli Occupation, Veterans for Peace, CODEPINK, Jewish Voices for Peace, the Party for Socialism and Liberation (PSL) and more -- who did so much to mobilize for the four protests that took place in D.C. during Netanyahu's visit: at the White House, when the American Enterprise Institute gave him an award and when he spoke at the Center for American Progress.

We in the ANSWER Coalition and people all over the country and world are committed to continuing this historic work.