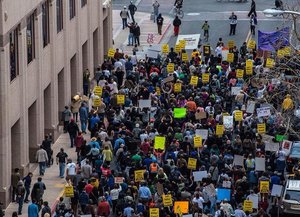 After videos of Boyd’s murder were released to the public, which set off a wave of anger throughout the city, the New Mexico chapter of the ANSWER Coalition initiated a call for an emergency march to demand justice for James Boyd and murder charges for the cops that killed him. Other progressive organizations in Albuquerque quickly joined in the mobilization effort.

On March 25, over 1,000 protestors marched through the downtown area to APD headquarters. The Albuquerque Journal, the most widely read local paper, described the protest as “by far the largest of its kind in Albuquerque in recent memory.”

People carried signs that read “Justice for James Boyd” and “Jail Killer Cops.” “Up, up, up with the people, down, down, down with the police!” chanted a massive crowd as it piled up in front of the APD headquarters.

At a solemn ceremony during the rally, family members of victims of APD slayings lifted a symbolic coffin into the air bearing the names of every person murdered by the police since 2010. They then added the name of James Boyd, commemorated all the victims during a moment of silence, and carried the coffin all the way to the front doorstep of the police department.

For the rest of the demonstration, however, protestors were enthusiastic and very loud.  On arriving at the police headquarters, they went directly to the front doors, where they continued shouting militant chants.  Some even posted a symbolic notice of eviction on the doors, suggesting those inside were not qualified to occupy their position of authority.

Speakers at the concluding rally included family members of past victims, including Mike Gomez, father of Alan Gomez, and Kenneth Ellis, Jr., whose son Kenneth Ellis III was an Iraq War veteran killed by APD.  One of the lawyers who successfully sued the city for violating Ellis's civil rights addressed the crowd as well.

The facts in the case

The killing of James Boyd by the APD is proof that the police do not serve or protect the people. Instead of dispatching a team of health professionals and social workers, APD dispatched a squadron of police officers equipped with military-grade weapons and wearing bullet proof vests.

The heavily armed unit of APD officers confronted Boyd as he lay asleep under a tarp. They had been informed that Boyd suffered from mental health issues and that he was a "reported ... paranoid schizophrenic.”

After a four-hour stand-off, video shows Boyd cooperating and trying to surrender. He can be heard saying, "All right, don't change up the agreement. I'm going to try to walk with you."

While trying to surrender, the APD suddenly hit Boyd with a flash-bang grenade and, while trying to actually turn away from the police, Boyd is shot with assault rifles. One of the officers can be heard saying "Booyah!" after shooting Boyd in the back. While incapacitated, APD officers shoot him again at close-range with lead-filled bean bag rounds and then maul him with their police dog.

Albuquerque's last two police chiefs were forced out under the scandal of police murder and brutality. The new police chief, Gordan Eden, Jr., wasted no time in disproving the “bad apple” theory of police violence. Five days after the murder, Eden declared the video-taped massacre of James Boyd as “justified” before briskly walking out of a news conference without answering reporter’s questions.

The APD have murdered 23 people since 2010, giving Albuquerque one of the highest per capita police murder rates in the country. Universal community outrage and a growing mass movement against police violence, which is carried out with complete impunity, sparked the U.S. Department of Justice to open an investigation into the APD for its pattern of civil rights violations.

The entire local political establishment is having to distance itself from the APD right now.

Just hours after the massive protest was held against the Albuquerque Police Department and police shootings, the APD shot and killed another person.

While the circumstances are not completely known at the time of this writing, eyewitnesses, including the victim’s sister, believe that the man was lowering a cell phone from his head when officers shot and killed him.

Clearly, no amount of reforms to date has served as any kind of deterrent to the brutal and racist APD. Police oversight commissions, lapel cameras, helmet cameras, tens of millions in fines, new police chief after new police chief – nothing seems to deter the trigger-happy APD.

The best “reform” would be to jail all killer cops! And if the ongoing Department of Justice investigation stops anywhere short of charging these cops with murder, then it also must be confronted by the people.