Hundreds in Albuquerque march against hate and fascism 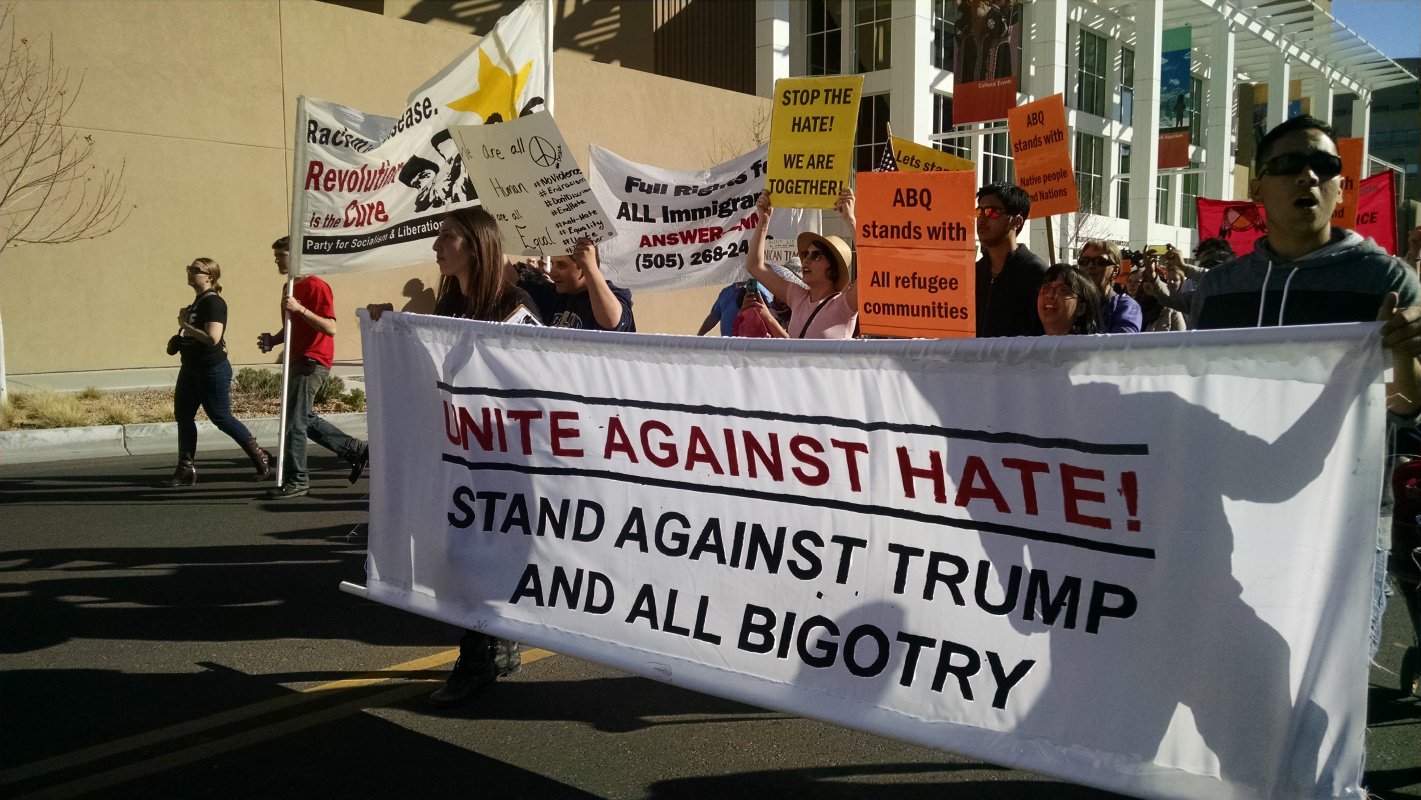 In Albuquerque, New Mexico, the 51st Anniversary of Malcolm X’s death was a day used to unite against hate and its main proponent in the electoral arena, Donald Trump. Immigrants, women’s rights groups, Indigenous coalitions, faith communities, socialists, progressives, and community activists joined together in a united front against hate. A message was sent loud and clear: The people will not stand for racism, sexism, homophobia, anti-immigrant bigotry, police brutality and imperialism abroad.

Nearly 45 organizations including the Albuquerque Teachers Union, Southwest Organizing Project, Santa Feans for Justice in Palestine, Albuquerque People for Bernie Sanders, Jewish Voice for Peace, Stop the War Machine, and the ANSWER Coalition, and over five hundred people joined in the March and Rally to Unite against Hate. This event drew people from all sectors of the working class, and people from small children to elders in the movement joined each other in speaking and standing out against all forms of bigotry.

The event started off with a rally where several community leaders and activists spoke.

Susan Schuurman, coordinator of the Albuquerque Center for Peace and Justice, opened up the rally by questioning how it is that Trump could be garnering so much support. “For such a candidate to attract millions of supporters is deeply disturbing, alarming and dangerous. His popularity emboldens fringe elements of our society to go beyond hate rhetoric to hate crimes. We must take a public stand against this virulent bigotry, like we are doing here today.”

Former Albuquerque City Council president Rey Garduno touched upon the figurehead of who the protest was against while stressing that it is wider than just one person. “Some of us may hope to bury Trump in the ground, but in standing against hate, we must actually make it so that Trump’s reckless speech and policies are buried forever.”

Several immigrant rights groups including El Centro de Igualdad y Derechos, New Mexico Interfaith Coalition for Immigrant Justice, Somos Un Pueblo Unido, and the New Mexico Dream Team were all present. Estefany Gonzalez with the United We Dream coalition and a member of the New Mexico Dream Team spoke about her experiences of struggling through school, facing deportation, and the importance of standing together. She drove the message of unity home by ending her remarks with a quote by Assata Shakur: “It is our duty to fight for our freedom. It is our duty to win. We must love each other and support each other. We have nothing to lose but our chains.”

The rally turned into a march with over 500 people filling the streets of downtown Albuquerque with chants including “Hey hey ho ho, Racism has got to go,” “Can you hear us loud and clear, Immigrants are welcome here” and “Dump Trump, Dump Trump.” During the march a moment of silence was held in front of the Federal Courthouse in honor of AIM leader and political prisoner Leonard Peltier. After the moment of silence there was a speech given by Nick Estes of The Red Nation Coalition that addressed the violence, mass incarceration, environmental degradation, and political repression faced by Indigenous People. Estes encouraged the crowd to keep up the struggle by reminding everyone that “Leonard Peltier was a revolutionary. You are a revolutionary!” Hundreds put their fists in the air and chanted “I am a revolutionary.”

Children were also very much a presence both during the march and also the rally. Several chants were spontaneously heard throughout the march that were led by children including “Love unites, keep up the fight!” CJ Kushman, 8-years-old, got up and addressed the second part of the rally after the march had returned to Civic Plaza “I want to speak to the other kids in the crowd, I want them to know that they have lots of ways to deal with hate.” Vanissa Kushman, mother of CJ and organizer with ANSWER New Mexico, spoke immediately after her son: “It is so powerful to see so many choosing to come together to make things better for our community.”

Chris Banks of the Party for Socialism and Liberation drove home the point of why it is important that people gather in the streets and challenge the resurgent fascist tendencies “Fascism is a tumor, and when it is ignored, it will turn into cancer, and we cannot let it get to that point. We must take this opportunity to reach out and build movements that are strong and vibrant”.

Issac de Luna, an organizer with El Centro de Igualdad y Derechos, encouraged everyone to continue to build. “Let’s not let this movement die off, it is everyone’s responsibility to get involved and create the change we want to see.”